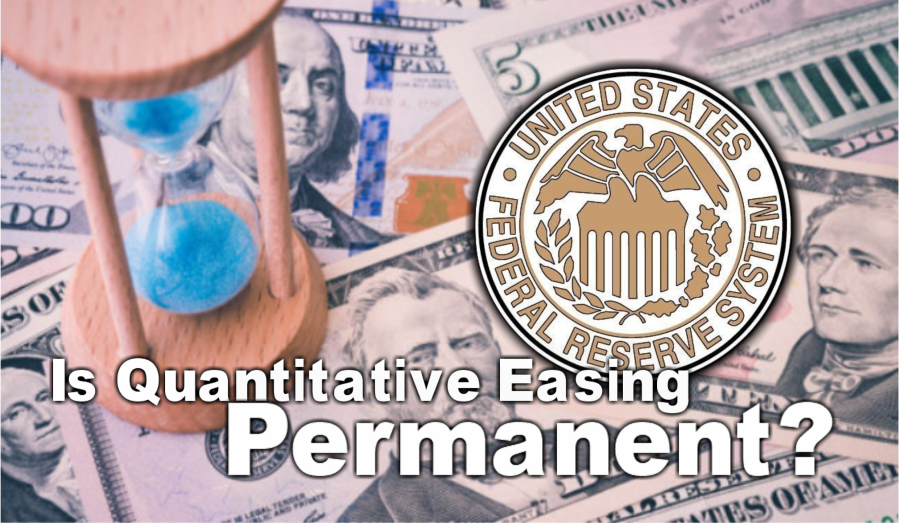 Will quantitative easing soon become a permanent fixture of markets?

Today we ponder the formerly impossible…

But we begin with a conclusion:

The Federal Reserve has lost its race with Old Man Time.

The opening whistle blew in December 2015… and Janet Yellen came off the blocks with a 0.25% rate hike.

If the Federal Reserve could make it across the 3.5% finishing line before recession struck,  it could then tackle the next recession with a full barrel of steam.

Historically, it takes 300–400 basis points of rate cuts (3–4%) to steer the U.S. economy out of recession. Fed policy today can be understood as a desperate race to get the fed funds rate to 3.5% before the next recession hits without actually causing a recession in the process.

Alas… the Federal Reserve will not make it.

Wall Street will not let it.

It has already broken Jerome Powell. And it has him safely by the snout.

Powell had the finish line in sight as recently as December… when he raised the fed funds rate to 2.50%.

But the stock market plunged violently. It was within an ace of a bear market by Christmas.

It took Powell’s wind away. It left him doubled over, hands on knees, breathless… and conceding the race.

As Jim Rickards explains, “patience” is code for “no rate hikes until we give you a clear signal.” (See more below.)

Stocks immediately proceeded to a lovely run of their own.

The Dow Jones has recaptured some 3,000 points since its December low.

But should Powell resume the race, Wall Street will be waiting for him… with its foot out.

The world economy pegs along at a crawl as is. And recession could be coming up fast behind it.

Now it is obvious to even the dense: The race is lost.

You can expect no additional rate hikes.

RBC Wealth Management’s lead fixed-income strategist Craig Bishop agrees with us — the Federal Reserve is out of the race.

The global slowdown scenario in our opinion will keep the Fed sidelined indefinitely and, in effect, cap interest rates…

We think the Fed is done, the tightening cycle is over. We agree with market expectations that the next move will be a rate cut.

The market is presently giving 97% odds that the Federal Reserve will either hold steady the rest of the year — or cut rates.

In either instance… the market projects it will cut rates before raising them.

Next we come to Janet Yellen herself…

La Yellen opened the race against time before handing Powell the baton last February. Says she:

“If global growth really weakens and that spills over to the United States… it’s certainly possible that the next move is a cut.”

But we would remind the good lady and all concerned:

The past three recessions fell within 90 days of the first rate cut that ended a hike cycle.

It may come as a surprise to many that the last three recessions all took place [within] three months of the first rate cut after a hiking cycle!

Will this time be different?

But if the Federal Reserve cannot make it past a piddling 2.50%… how can it ever return to normal?

And so we return to today’s central question…

That is, quantitative easing would attain general status — not restricted to emergency use only.

An important question is should those [tools like QE] always be in the toolkit? Should you always have them at your ready, or should you think about [how] those are only tools you use when you really hit the zero lower bound and you have no other things you can do?

Would she frame the question in these sugary tones if the answer were no?

Daly allows that interest rates would remain the Fed’s primary cudgel. But QE would remain close by, always within the arm’s reach:

“You could imagine executing policy with your interest rate as your primary tool, and the balance sheet as a secondary tool, but one that you would use more readily.”

And the doctor will never withdraw the needle…