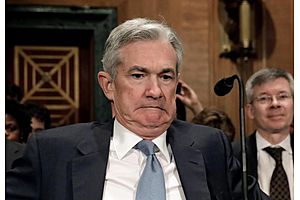 After a month of constant verbal gymnastics (and diarrhea from financial pundit sycophants who can’t think creatively or originally and merely parrot their echo chamber in hopes of likes/retweets) by the Fed that the recent launch of $60 billion in T-Bill purchases is anything but QE (whatever you do, don’t call it “QE 4”, just call it “NOT QE” please), one bank finally had the guts to say what was so obvious to anyone who isn’t challenged by simple logic: the Fed’s “NOT QE” is really “QE.”

In a note warning that the Fed’s latest purchase program – whether one calls it QE or NOT QE – will have big, potentially catastrophic costs, Bank of America’s Ralph Axel writes that in the aftermath of the Fed’s new program of T-bill purchases to increase the amount of reserves in the banking system, the Fed made an effort to repeatedly inform markets that this is not a new round of quantitative easing, and yet as the BofA strategist notes, “in important ways it is similar.”

But is it QE? Well, in his October FOMC press conference, Fed Chair Powell said “our T-bill purchases should not be confused with the large-scale asset purchase program that we deployed after the financial crisis. In contrast, purchasing Tbills should not materially affect demand and supply for longer-term securities or financial conditions more broadly.” Chair Powell gives a succinct definition of QE as having two basic elements: (1) supporting longer-term security prices, and (2) easing financial conditions.

Here’s the problem: as we have said since the beginning, and as Bank of America now writes, “the Fed’s T-bill purchase program delivers on both fronts and is therefore similar to QE,” with one exception – the element of forward guidance.

The upshot to this attempt to mislead the market what it is doing according to Bank of America, is that:

Putting the Fed’s “NOT QE” in context: so far the Fed has purchased $66bn of Tbills and may purchase $60bn per month through June 2020, which could result in an increase in the Fed’s Treasury holdings by about $500bn.

While we have repeatedly written in the past why we think the Fed’s latest asset purchase program is, in fact, QE, below we present BofA’s argument why we are right.

As Axel writes, there are two basic mechanisms how T-Bill purchases support longer-term security prices: the increase in cash assets and deposit liabilities on bank balance sheets, and the reduction of funding risk for leveraged buyers of Treasuries, MBS and other financed securities.

For those who have forgotten how the “asset reflation” pathway works, recall that the Fed either buys T-bills from investors such as money market funds, or from primary dealers who do not hold T-bills, but can buy them at auction to sell to the Fed. Buying from investors converts their T-bill holdings into new Fed cash, which in turn winds up on deposit in the banking system. If instead a primary dealer buys a Tbill at auction and sells it to the Fed, the transaction results in new Fed cash placed in the Treasury’s cash account, while the dealer balance sheet is unchanged, and the banking system balance is also unchanged. But once the Treasury spends the new Fed cash on a social security payment or a medical insurance bill, etc, the cash enters the banking system and increases the aggregate balance sheet of banks.

Either way, bank balance sheets expand and banks will need to (1) hold more HQLA (high quality liquid assets) against those deposits, and (2) put some of their new cash to work in longer-term securities such as mortgage-backed securities (or even stocks)? Although banks can be flexible in how they deploy the new cash, it is likely that a portion of it will go into bonds similar to what banks already hold (currently $1.8TN in MBS securities and $770bn in Treasuries, according to Fed H.8 data). And once bonds are bid, other investors have no choice but to reach for even riskier securities, such as stocks.

Meanwhile, while the Fed does not directly lend to leveraged investors, some of the increased cash on hand at banks will likely go into repo markets to fund overnight loans to potential buyers of long-term securities in Treasuries and mortgages. This, as BofA explains, is how the increase in reserves is designed to calm repo markets. The amount of bank lending in repo has increased by about 50% since the end of 2017.

And while one can argue that the proper metric is repo funding as a percentage of Treasuries and MBS outstanding, the bigger picture is that if repo markets stopped functioning today, the amount of Treasury and MBS securities held outside of banks-dealers requiring liquidation (for lack of funding) would be about twice as large as 2008, and as BofA warns, “with today’s surprisingly low levels of liquidity in the “liquid markets” the impact could be massive.” In this context, BofA views the Fed’s purchase program as integral to the promotion of easy financial conditions and supportive of asset prices, which as Chair Powell himself admitted, is the second key criterion for QE.

At this point it is worth considering a critical, if tangential question: Why is the Fed so concerned about not signaling QE, and why are so many Fed fanboys desperate to parrot whatever Powell is saying day after day?

Simply said, there are several reasons why the Fed is making a great effort to let the world know that its security purchases are not QE and are not reflective of any change in monetary policy stance. The first is the obvious issue of signaling concern around the economic outlook which would run counter to its cautiously optimistic and often upbeat assessment. After all, why do QE if the economy has “never been stronger”, and the Fed was hiking rates as recently as a December. Included here are the concerns about running out of ammunition at the zero lower bound of rate policy. With negative rates increasingly off the table – until push comes to shove of course and the Fed is forced to cut below zero – QE is meant to be reserved as dry powder for a rainy day when conventional tools are exhausted (even if QE is in fact taking place this very instant).

A less obvious concern for the Fed is connecting monetary policy to bank demand for Fed liabilities, which as BofA admits, “is not something that fits neatly within its dual mandate”: last January, the Fed made a “momentous decision” to run an “abundant reserve regime” also known as a floor system, where the central bank decided not to return to its pre-crisis days of zero excess reserves. As such, the central bank now views the proper level of excess reserves (a Fed balance sheet liability) not in terms of its dual mandate for inflation and employment, but in terms of how banks prefer to meet regulatory liquidity requirements and how this preference impacts repo and other markets.

In short, the Fed’s dual mandate has been replaced by a single mandate of promoting financial stability (or as some may say, boosting JPMorgan’s stock price) similar to that of the ECB.

Here BofA adds ominously that “by deciding to dynamically assess bank demand for reserves and reduce the risk of air pockets in repo markets, we believe the Fed has entered unchartered territory of monetary policy that may stretch beyond its dual mandate.” And the punchline: “By running balance-sheet policy to ensure overnight funding markets remain flush, the Fed is arguably circumventing the most important brake on excess leverage: the price.”

So if NOT QE is in fact, QE, and if the Fed is once again in the price manipulation business, what then?

According to BofA’s Axel, the most worrying part of the Fed’s current asset purchase program is the realization that an ongoing bank footprint in repo markets is required to maintain control of policy rates in the new floor system, or as we put it less politely, banks are now able to hijack the financial system by indicating that they have an overnight funding problem (as JPMorgan very clearly did) and force the Fed to do their (really JPMorgan’s) bidding.

While it is likely that beyond year-end, the additional tens of billions in reserves will have the required soothing effect, what is less clear is that the Fed can make sure the bank repo lending footprint is resilient to dips in the bank credit cycle.

And this is where BofA’s warning hits a crescendo, because while repo is fully collateralized and therefore contains negligible counterparty credit risk, “there may be a situation in which banks want to deleverage quickly, for example during a money run or a liquidation in some market caused by a sudden reassessment of value as in 2008.”

Got that? Going forward please refer to any market crash as a “sudden reassessment of value”, something which has become impossible in a world where “value” is whatever the Fed says it is… Well, the Fed or a bunch of self-serving venture capitalists, who pushed the “value” of WeWork to $47 billion just weeks before it was revealed that the company is effectively insolvent the punch bowl of endless free money is taken away.

Going back to repo, in such a crashy, pardon, “sudden value reassessmenty” environment, it seems implausible to expect banks to maintain their level of repo lending. And if repo lines were drawn down far enough and for long enough in time, it could lead to deleveraging at institutions that were otherwise healthy, precisely what happened during the financial crisis when the lock up of Lehman’s various overnight funding lines instantly cascaded across the financial system, resulting in an overnight paralysis of the US shadow banking system, and resulting in the near- bankruptcy of the largest US bank.

Think of this as Europe’s infamous doom loop, only in the US and instead of sovereign debt, it uses repo as a risk intermediary to keep the system functioning.

In short, not only is the Fed pursuing QE without calling it QE, but by doing so it is implicitly raising the odds – more so than if it simply did another QE and rebuilt reserves to abour $4.5 trillion or more by purchasing coupon bonds – of another market crash.

It is, however, BofA’s conclusion that we found most alarming: as Axel writes, in his parting words:

“some have argued, including former NY Fed President William Dudley, that the last financial crisis was in part fueled by the Fed’s reluctance to tighten financial conditions as housing markets showed early signs of froth. It seems the Fed’s abundant-reserve regime may carry a new set of risks by supporting increased interconnectedness and overly easy policy (expanding balance sheet during an economic expansion) to maintain funding conditions that may short-circuit the market’s ability to accurately price the supply and demand for leverage as asset prices rise.“

In retrospect, we understand why the Fed is terrified of calling the latest QE by its true name: one mistake, and not only will it be the last QE the Fed will ever do, but it could also finally finish what the 2008 financial crisis failed to achieve, only this time the Fed will be powerless to do anything but sit and watch.