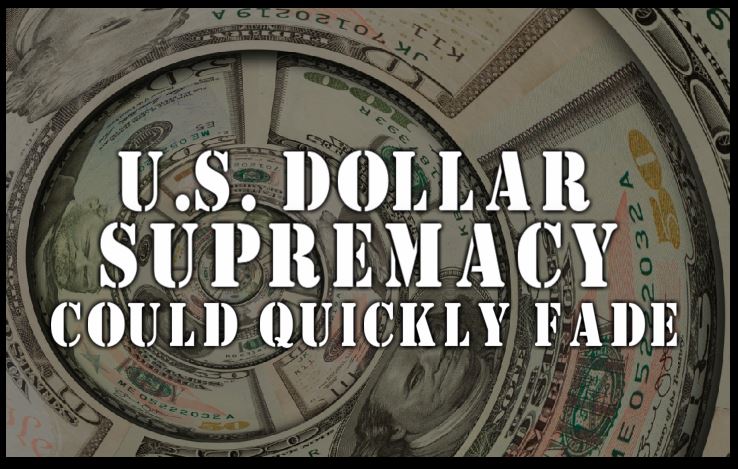 Being and remaining a reserve currency is closely tied to four broad factors:

The US dollar currently commands this privilege. It was by no means the first reserve currency; the Roman Denari was used throughout their empire in ancient times, during the middle ages, the Venetian Ducato and Florentine Florin gained credence. The chart below looks at the evolution of reserve currencies since 1450: they wax and wane:

The US dollar’s predecessor, Sterling, achieved its time in office as a result the decline of French dominance after the Napoleonic Wars. British trade flourished and with it the merchants’ needs finance. The discount houses of Lombard Street, insurance brokers of Lloyd’s coffee house and even the stock jobbers’ of Change Alley swiftly responded, creating the necessary financial instruments for Sterling to emerge as the preeminent currency of international trade and finance. You will note that trade followed by finance, for that is how the relationship began, with trade as the master and finance the servant.

The passing of the baton from the UK to the US resulted from two disastrous and expensive world wars and the subsequent demise of British Empire and influence. As part of the Bretton Woods agreement, under the gold exchange standard, the US dollar became the instrument of conversion whilst it was pegged to gold at US$35/oz. By the 1960s, however, cracks were beginning to show.

These economic conflicts between short-term, domestic and long-term, international objectives, for the manager of the reserve currency, were first defined by Robert Triffin. In 1971 Triffin’s dilemma became reality with the collapse of the Bretton Woods agreement. Oil, notionally blamed for the collapse, was, by this stage, no longer priced in Sterling but in US dollars. Gold was gone but the vast trade in oil allowed the US dollar to retain its position through its sheer volume of transactions.

A mixture of inertia (what economists call a network externality), military might and relative value (when compared with more inflation-bent regimes) rendered the US dollar still supreme. In a 2016 essay for Brookings – The dollar’s international role: An “exorbitant privilege”? former Federal Reserve Chairman, Ben Bernanke, highlighted the following factors which have allowed the Dollar to maintain its position:

Whilst many years of research has been undertaken in an attempt to calculate the value of being the reserve currency, Barry Eichengreen description is most succinct: “It costs only a few cents for the Bureau of Engraving and Printing to produce a $100 bill, but other countries had to pony up $100 of actual goods in order to obtain one.”

The 17th ECB – International role of the euro – report from June 2018 explores the position of the world’s second reserve currency, the Euro. The chart below looks at the big four, the US dollar, Euro, Japanese Yen and Chinese Yuan:

At first glance, the US dollar appears to be comfortably in the vanguard. A more nuanced approach is to look at the evolution of these market. The rise of the Euro is far more evident in its share of cross-border payments:

By contrast, the value of financial debt is still heavily biased towards the US currency, although the recent rise in US dollar issuance may be related to the higher interest rate available in the US markets when compared to the Eurozone, Switzerland or Japan:

The size and demand of the US domestic capital market distorts the total in the chart above but the dollar also retains a substantial lead as the currency of choice for non-domestic debt issuance:

A similar pattern is evident in cross-border loans, although this may be related to the relatively robust condition of US banks in comparison with their European counterparts:

What is most evident from all of these charts is the impression of a two-horse race between the US dollar and the Euro. No other currency is a serious contender.

How Rapidly Could US Dollar Hegemony Evaporate?

Although world leaders and central bankers (most recently Mark Carney, Governor of the Bank of England) anticipate the US dollar’s fall from grace, barring a major war, any challenge to the greenback’s reserve status is likely to be gradual at best. Nonetheless, a number of external factors might combine to accelerate its eventual demise:

Back in 2009 Zhou Xiaochuan, the then governor of the People’s Bank of China gave a speech in which he stated that Keynes’s Bancor approach had been ‘farsighted’. He proposed the adoption of International Monetary Fund SDR as a global reserve currency. Later that year, at the G8 summit, Russian President, Dmitry Medvedev, bestowed a new international coin on each delegate with the words ‘unity in diversity.’ In September 2016 the Chinese Yuan was finally included in the SDR basket.

How Rapidly Could the Dollar Decline?

There is still a long way to go. Prior to its launch in 1999 the currencies which now comprise the Euro accounted for around 18% of global reserves; those reserves rose marginally until 2003. Today combined Euro reserves are just over 20%.

This chart shows the waxing and waning of US reserves between 1965 and 2018. The recent low-point was 46% in 1991, this was a response to the original collapse of the Bretton Woods agreement. Interestingly the rebound began with the outbreak of the Gulf War:

The US dollar managed to remain the reserve currency even with only 46% of global reserves. This suggests that, so long as the US remains actively engaged in international trade, its dominant position is assured.

The greatest risk to the US dollar may, in fact, come from within. The imposition of tariffs and sanctions create an opportunity for other countries to engage in bilateral trade. The decision to withdraw from the free trade initiatives such as the TPP and T-TIP weakens not only the prospects for US trade but also the preeminent position of the US dollar.

In her 1994 book – When China Ruled the Seas – Louise Levathes recounts the journeys of the largest fleet of treasure ships ever witnessed at that time 1405-1433. After the death of the Yongle Emperor in 1424, China turned inward, spurred on by civil unrest due to a series of bad harvests. China’s xenophobic decision, that the rest of the world had nothing to offer, created an opportunity for Venice. The Italian Renaissance and the course of the new world order can be charted from this point.

Markets abhor a vacuum. If the US turns its back on the world, the world will find a way to fill the void. The exorbitant privilege of being the reserve currency has undeniable benefits but, as Bastiat would have put it, that is what is seen, what is unseen is the condition for maintaining it: engagement in free-trade with the rest of the world.