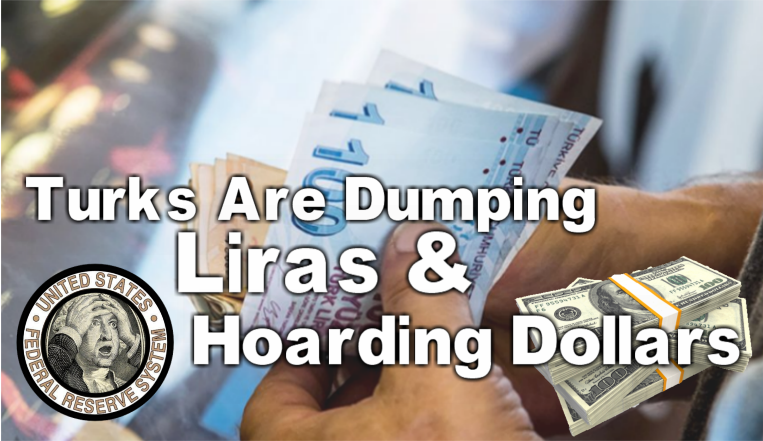 Turks may be losing faith in their own currency. Faced with runaway inflation and near-zero real returns on local-currency deposits, households and companies in the Middle East’s largest economy have converted $18 billion of their lira savings into dollars and euros since September.

The rush takes the share of foreign currency held by Turkish residents to 47 percent of total deposits, the highest level in at least 13 years. That’s a sign that the creeping dollarization of the economy — a hedge against bouts of depreciation and persistent inflation — that started to pick up in 2011 is not losing steam, despite the central bank’s efforts to anchor the currency.

The monetary authority raised rates aggressively in September to stem a run on the lira, sparking a remarkable rebound in the currency — it has now recouped around a third of its value against the dollar from a record low in August. But with the average rate on short-term deposits paying savers less than one percentage point over inflation, locals have turned their back on the rally.

“It’s something that makes me concerned,” said Timothy Ash, a strategist at BlueBay Asset Management in London. Low deposit rates, heightened concern over the inflation outlook and skepticism over the “anti-market” measures, such as price controls, that the government has taken is behind the “continued retail bid for dollars.”

While the central bank has been very careful in telegraphing its intent to maintain a tight monetary policy stance until it sees a more “convincing” decline inflation, the government has been leaning on lenders, pressuring them to keep a lid on rates before municipal elections in March.

Compounded by the lack of demand for credit and a muted competition for deposits between the banks, the average rate on a lira deposit account has dropped by more than 600 basis points from a high in 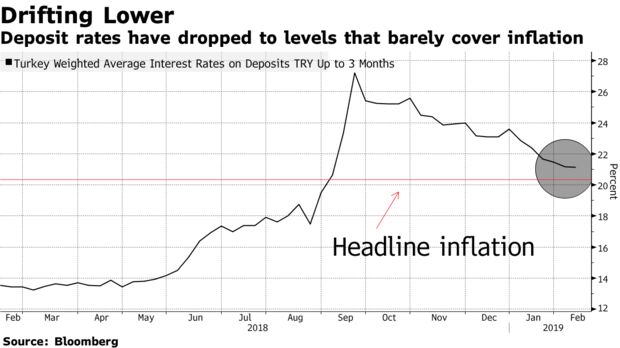 September to 21.1 percent. Headline inflation as of January was running at 20.35 percent.

While inflation has cooled from a 15-year high of 25.2 percent in October there’s growing concern that some of the measures the government is taking to tackle the problem are only temporary solutions designed to massage the headline numbers rather than deal with the root cause. That’s adding to the list of reason that Turks are ditching their currency.

Over the past few months, authorities have resorted to fining food wholesalers for “exorbitant” price increases, according to Trade Minister Ruhsar Pekcan. The government has set up stations in Turkey’s largest cities to squeeze out middlemen by purchasing vegetables directly from farmers and selling them at cut-rate prices, which is said to be easing pressure on inflation for February.

“I’m under the impression that nobody domestically really believes the current state of things is going to last for very long,” said Cristian Maggio, the head of emerging-market research at TD Securities in London. “While there’s no sense of imminence, building an FX buffer at a time of relative quiet in the market may be a better strategy than being forced to act when things are going down the drain.”