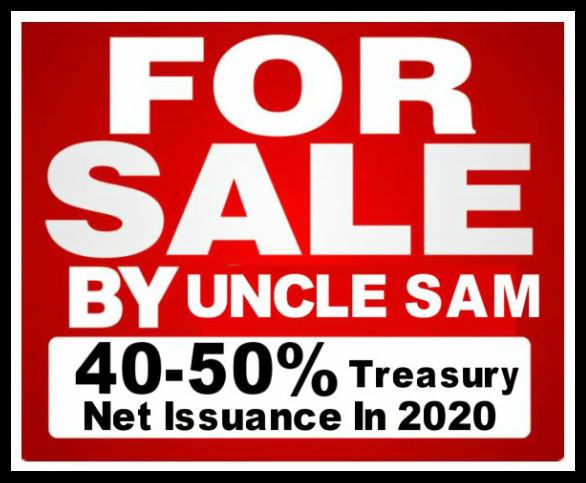 With the federal deficit running 22% higher during the first ten months of 2019 compared to the same period last year ($800bn vs. 655bn), student loans and other federal programs which increase the Treasury’s overall borrowing are running somewhat lower.

Given the latest numbers, Deutsche Bank estimates Treasury’s total 2019 borrowing will come in at around the same level as 2018, at $1.1 trillion. Looking ahead to 2020, the bank projects the deficit will be $1.01 trillion, assuming similar levels of borrowing for federal loan programs as in 2019 and an unchanged Treasury cash balance. Given these figures, Treasury’s borrowing needs will be around $1.08 trillion in 2020.

Looking ahead, Deutsche Bank’s Steven Zeng writes that the current auction calendar is well set up to meet Treasury’s 2020 financing needs. Against unchanged coupon auction sizes, the Treasury will raise $830bn in coupon issuance. T-bills will be used to plug the roughly $250bn gap. Bills will represent 23% of next year’s net issuance, just below the 25-33% target the Treasury Borrowing Advisory Committee has recommended.

So who will fund this third consecutive trillion dollar budget?

Unlike the last three years during which the Fed was tightening financial conditions, keeping POMO, QE and debt monetization in check, and was engaging in Quantitative Tightening, in 2020, Deutsche Bank calculates that the Fed will buy an estimated $420bn Treasuries through open-market operations, or 40% of net issuance (which includes Bills) as it continues implementing its balance sheet policy of building higher level of reserve balances and returning to an all-Treasury portfolio.

In coupon securities, DB estimates the Fed will buy $153bn or 18% of net issuance next year (MBS principal payments are assumed to average out to $15 billion per month and 85% of that amount will be reinvested into coupon Treasuries.)

The Fed steps back into the bond market at a crucial time, just as foreign demand for US Treasuries at auction is weakening substantially.

One widely discussed reason for this decline is that the widening of policy rate differential between the Fed and other central banks has increased the hedging cost for dollar assets, diminishing Treasuries’ attractiveness to foreign buyers. Another reason could be the diversifying away from dollar assets by foreign reserve manager. Indeed, Treasury’s TIC data shows that foreign official institutions were net sellers of Treasuries in 2019, which is consistent with the decline in the Fed’s foreign custody holdings.

On the other hand, the growing share of negative-yielding debt in many developed markets seem to continue driving foreign capital into the Treasury market, especially for private investors who according to Zeng do not need to currency hedge. A disinversion of the yield curve could also motivate central banks that have been investing in repo markets to buy more bills and coupons again.

Between the two, foreign private investors are a bigger source of duration demand in Treasury market (their holdings are on average 10-year maturity versus 5 years for foreign official institutions). Looking ahead, Deutsche Bank thinks foreign demand could be more modest but still positive in 2020; should it turn out to be “more negative”, expect more “unexpected” repo market fireworks which will allow the Fed to intervene more forcefully in the bond market, soaking up even more of the net supply, all under the guise of “fixing” the repo market.