The Die Is Cast 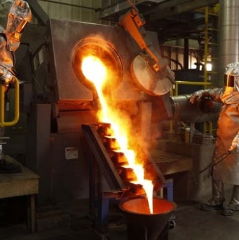 One of my good friends from the 1980s and 1990s was the late Ian McAvity, a superb technical analyst, a founder of Central Fund of Canada, a Bay Street Mover and, most importantly, a humble and thoroughly enjoyable man.

He was the first newsletter writer that I came across in my early years as a “registered rep,” totally committed to technical analysis but with an undying and near-prophetical emphasis on precious metals.

It was in the 1980s, with gold having entered what would become a 21-year bear market. Many of the newsletter-flogging gloom-and-doomsters were making outrageous claims of “$1,000, $2000, $5,000 gold!!!” in a desperate (and unsuccessful) effort to distract their patrons away from the fledgling new bull market in stocks, which went on to dominate the investment horizons until the century came to its abrupt terminus. I liked Ian’s style because in the mid-1980s, his bearish technical assessment of gold turned out to be not only disappointedly spot on, but also quite a refreshingly contrarian approach.

However, what he is remembered for by this author is his response to the notion of a $1,000 gold price, usually delivered to an audience of survivalist gold bugs, all chanting and grumbling amid the gnashing teeth and gums at the $400 gold price while staring wild-eyed at the lectern. Ian would summarily punctuate the mood of the room with this sobering warning: “You better be careful what you wish for.”

As I look at the headlines this weekend of plunging the purchasing managers index and the collapsing Baltic freight index and more and more cases of COVID-19 in more and more countries, the McAvity caveat has never been more relevant. I am one investor who has decidedly mixed feelings about the prospect of new, all-time highs in the U.S. dollar (USD)-denominated price of gold, and I say that because gold is now at record highs in virtually every currency on the planet other than the USD.

Foreign investors are using U.S. dollars and gold as safe-haven warehouses, and only when that changes will U.S. and Canadian investors experience the full impact of this global exercise in currency debasement. As gold screamed through the 2019 high of $1,613 this week, I was filled with the sensation of “dread” despite what should have been celebration at having called it correctly.

You will recall my comments on the intellectual differences between stock, bond and copper investors, and how copper has the PhD while bonds wrote the textbooks, leaving stocks as the kid with the pointed hat sitting in the corner of the classroom. Well, the chart shown below is yet another exclamation point that illustrates what the really big and really smart money is doing—right now—and I assure you that it is not buying stocks or copper.

The yield on the long bond is heading south in a hurry, and because long-term yields are market driven and not “administered” (by Central Bank policy), it is evident that “the smartest guy in the room” is heading for the safety of the Treasury market.

With the big move in gold last week, most of the components of the 2020 portfolio moved in the right direction, although sadly, erring on the side of caution has left 2020 subscribers without the all-important key exposure to physical gold.

While I added calls on the silver exchange-traded fund (ETF; SLV:US) to mirror the physical silver position, I find myself mired in angst at the prospect of adding gold $100 higher than it was on New Year’s Day. I am sure that the exposure I have in place via the ETFs and junior developers provides sufficient upside leverage so as to fully capitalize on rising gold prices, but watching the golden engine steam out of the station while riding in the club car is somewhat (but not totally) frustrating. We are still going to arrive at the same destination but without the engineer’s enviable view.

The HUI has finally made a move to the upside, and while it is obviously in response to new highs in gold, it is also related to some of the earnings reports that came out last week, most notably Eldorado Gold Corp. (ELD:TSX; EGO:NYSE; $9.93), which rose 32.05% on Friday after they reported stunning results and even better forward guidance. (I’ll have more on Eldorado in the subscriber section.) The significance of big reactionary moves like EGO had cannot be understated; it is rerating of the junior and intermediate producers that will drive the HUI to all-time highs (600-plus) in the months ahead.

I find it extremely encouraging and infinitely satisfying that the gold miners are finally getting some love bestowed upon them, as opposed to electric car companies that are leaking cash, diluting share capital while offering an inferior product, but which are still engrained in the minds of the millennials as “cool stocks to own.” When gold miners finally become “cool” to this younger generation of sheep, you and I will be net sellers but alas, that is some time in 2022 and at much higher levels.

I don’t have a lot of things to say this week about the GSR other than what I wrote last week in the Email Alert 2020-20: “I don’t want to hear or read excuses that blame JP Morgan or HSBC or the Crimex or the SEC or the ‘cartel;’ I want silver to break free of the shackles of intervention and interference and get into gear today. Period. If silver fails to launch into the slingshot effect, then the integrity and validity of the gold move is suspect and that goes for the gold miners as well. Accordingly, I am watching silver very closely for a sign that it has graduated into its role as a leader.”

You can take those words to the bank, because no one that matters ever cares to listen to excuses. The margin clerk doesn’t care; your loan officer doesn’t care; the CIO of your firm doesn’t care; and your loved ones don’t care either. Silver has to move, and it has to move now, as in next week—period.