Reduce Exposure To The Stock Market 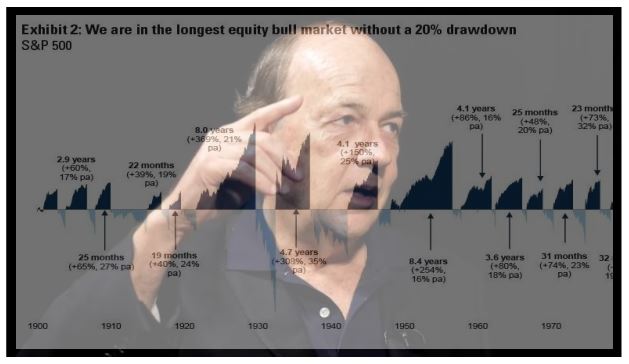 The major stock market indices will move sideways through the remainder of the month (and year) to end the year about where they are now. That said, if markets move outside a narrow range, there is more downside potential than upside.

This is a good time to lighten up on equity exposure and reallocate to bonds, cash and gold.

Stock markets haven’t gained much over the past two years. That may come as a shock to investors who feel like they’ve been on a roller coaster ride since early 2018. Yet, the fact is that the Dow Jones Industrial Index was 26,616 on January 26, 2018 and about 27,850 as of today.

That’s about a 1,200-point gain, or 600 points a year. 600 points is one good day for the market. Is that the best it can do over two years? Even adding an average 2% annual dividend yield, the annualized return is about 3%. That’s far less than an investor could have made in super-safe U.S. Treasury bonds.

If you’re a day trader, you might have made money buying dips and selling near the top in rallies. More likely, non-professional traders lost money chasing the rallies and bailing out during the drawdowns. If you’re the typical buy-and-hold investor watching your 401(k) statements, you’ve gone almost nowhere despite the fireworks. You’re right back where you started.

The question is, why?

The drivers of the sideways movement in stocks are slow economic growth and weak earnings growth in individual companies.The drivers of the short-term volatility along the way are good news/bad news on trade wars, and utter confusion at the Fed.

The bottom line is stocks are moving sideways on a sea of uncertainty. Let’s back up a minute to see how we got here…

After the Trump tax cuts passed in late 2017, the White House was predicting growth would return to the long-term trend (post-1980) of 3.2% or higher. That hasn’t happened.

The second quarter of 2018 did show annualized growth of 3.5%, but that was a one-time effect from employee bonuses and consumer confidence due to higher stock prices resulting from the Trump tax cuts.

Since then growth has slowed even more as the effect of the 2017 tax cuts has faded. On an annualized based, the first quarter of 2019 showed 3.1% growth, the second quarter was 2.0% and original readings of third-quarter growth came in at 1.9%. It was upgraded to 2.1%, but that’s nothing to write home about.

This puts annualized growth year-to-date at 2.4%, almost exactly where it has been for the past ten years. In short, the Trump growth miracle is a mirage. We’re in the same 2.3% rut we’ve been in since 2009.

The cumulative impact of trade wars, currency wars and geopolitical tension is also reflected in a slowdown in global growth. The following summary comes from the IMF’s World Economic Outlook press conference on October 15, 2019 as presented by Gita Gopinath, Director of the IMF’s Research Department:

As for the global economy, the global economy is in a synchronized slowdown. And we are, once again, downgrading growth for 2019 to 3 percent, its slowest pace since the global financial crisis. Growth continues to be weakened by rising trade barriers and growing geopolitical tensions. We estimate that the U.S.‑China trade tensions will cumulatively reduce the level of global GDP by 0.8 percent by 2020. Growth is also being weighed down by country‑specific factors in several emerging market and developing economies and also by structural forces, such as low productivity growth and ageing demographics in advanced economies. … The weakness in growth is driven by a sharp deterioration in manufacturing and global trade, with higher tariffs and prolonged trade policy uncertainty damaging investment and demand for capital goods… Overall, trade volume growth in the first half of 2019 has fallen to 1 percent, the weakest level since 2012.

The good news/bad news volatility is also easy to explain. Stock markets are no longer traded by humans with different perspectives. Stocks are traded by robots, and robots are dumb.

Many investors still have the belief that their buy or sell stock orders are matched against other orders by humans with different views. The orders are matched by computers and the result is an orderly market with efficient price discovery. That scenario is not true.

Today, over 95% of New York Stock Exchange trades are generated by robots using algorithms to decide when to buy and sell. These are not matching systems (which have been around since the 1990s). These are trading robots that decide what to do without human intervention.

The good news is that robots are easy to figure out. They act automatically based on source code and algorithms developed by coders and applied mathematicians who don’t necessarily know much about the psychology of markets. Robots buy or sell based on headlines or key words.

They also buy “high” (as defined) and sell “low” (also as defined) based on boundaries set by the developers.

This dynamic explains both the short-term volatility and the longer-term range bound trading. On the one hand, robots will scramble (in microseconds) to dump stocks if there’s a negative report in the trade wars.

Unfortunately, neither the robots nor their human developers were ready for the Age of Trump.

President Trump will call President Xi of China his “best friend” on Monday and denounce Chinese “theft” on a Wednesday. Robots are good at reading headlines, but they’re no good at understanding nuance, body language or Trump’s Art of the Deal style.

The same is true of the robots’ ability to understand the Fed.

Jay Powell was a hawk in December 2018 (when he raised rates), a dove in January 2019 (when he promised not to raise rates), a super-dove in the spring of 2019 when he decided to cut rates and end Fed balance sheet reductions, and utterly confused in September 2019 when he said he might not cut rates soon, but would expand the balance sheet. Then Powell cut rates again in October.

How is a robot supposed to understand a highly conflicted human? It can’t. But, it can issue automated buy and sell orders on every new headline.

The bottom line is that growth is weakening, the Fed is cutting rates, the trade wars are not over (despite happy talk) and political tensions are rising.

That’s a mix of support for stocks (Fed rate cuts and good trade war news) and headwinds for stocks (bad trade war news, weak growth and politics). These forces will tend to offset each other and leave stocks in early 2020 about where they are now.

That’s a reason to reduce equity exposure and consider some of the stronger plays in bonds and gold.

by James Rickards via Daily Reckoning