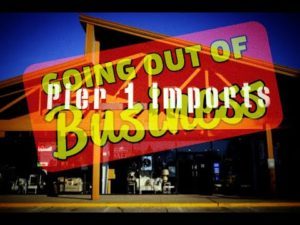 Pier 1 Imports on Monday said it intends to close up to 450 locations, or almost half its fleet of 942 stores, as it unexpectedly reported quarterly earnings amid bankruptcy rumors.

Pier 1′s losses have been mounting, as its sales decline. And this latest quarter was no exception. Its third-quarter loss widened from a year ago, as same-store sales declined 11.4%.

The company said it also plans to shut certain distribution centers and reduce its corporate expenses, which includes slashing its corporate headcount.

“Fiscal third quarter sales and margins remained under pressure,” CEO Robert Riesbeck said in a statement. “Looking ahead, we believe that we will deliver improved financial results over time as we realize the benefits of our business transformation and cost-reduction initiatives.”

Pier 1 shares remained halted as the earnings report came out. Earlier in the afternoon, the retailer’s shares tanked more than 25% before being halted for news, following a report from Bloomberg that said Pier 1 was preparing to file for bankruptcy. The stock was also briefly halted due to volatility earlier Monday.

A representative from Pier 1 didn’t immediately respond to CNBC’s request for comment about the Bloomberg report.

The loss in the latest period includes $10 million in restructuring costs that include professional fees, and a non-cash charge of $14.1 million for store impairment. The per-share figures reflect a 1-for-20 reverse stock split in June 2019, Pier 1 said.

Same-store sales dropped 11.4%, hurt by slower foot traffic in stores. The timing of this year’s holiday also hurt results in the latest period, the company said. But it added that should benefit its fourth-quarter results.

In November, Riesbeck was named CEO, replacing Cheryl Bachelder, who had been serving as interim CEO since December 2018. Riesbeck had been Pier 1′s CFO since July 2019 and has prior experience in turnaround situations.

With Monday’s results, Pier 1 has posted sales declines for nine consecutive quarters. The home furnishings giant has lost market share to the likes of Amazon, Walmart, Target and Wayfair. It has struggled to draw shoppers into stores.

During an earnings conference call in September, Pier 1 executives said the company was planning to shutter about 70 stores in fiscal 2020, and potentially more, depending on how situations with landlords pan out.

Pier 1 had already been on many analysts’ bankruptcy watch lists, with its weakening financial situation and large debt load.

Before joining Pier 1, Riesbeck was CFO at FullBeauty Brands, in addition to serving as CEO and president at furniture company H.H. Gregg and as an operating executive at private equity firm Sun Capital Partners.

“Although decisions that impact our associates are never easy, reducing the number of our brick-and-mortar locations is a necessary business decision,” Riesbeck said on Monday.

The company hasn’t disclosed which locations it plans to close.