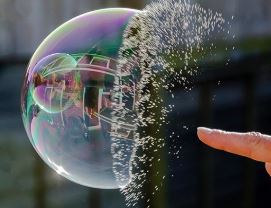 This weekend, newsletter writers the world over are scrambling to explain to their paid subscribers why they are now showing losses in portfolios that were supposed to be showing gains, and especially because it was only two weeks ago that the S&P 500 hit all-time highs at 3,393.52.

Without going into a long diatribe over the multiple warnings I issued in January, Mother Nature (or a bioweapons lab) has provided the pinprick that has now popped the global equities bubble, triggering a gargantuan rush to the exits and liquidity.

Mind you, the month of February started off like a house on fire, with literally everyone taking victory laps over their ingenious market prognostications and thumbing their noses at COVID-19, because Trump and Kudlow told us that it was a “non-event” and urged everyone to “buy the dip.” The gold newsletters were all collectively refuting any possibility of a 2008-style rout in the precious metals due to a silly virus, forgetting, of course, that the bullion banks did not let their bootheels off the throats of the precious metals for as much as one nanosecond. Even after the $105 crash from last Sunday’s $1,692 peak, by Tuesday, they had only reversed a mere 8,891 shorts.

Same applied for silver, but what was noteworthy was the mass liquidation in both gold and silver by the Large Speculators—yet not exactly a surprise. The weekly gold chart is a great deal healthier today than it was last weekend as the overbought condition is now absent, which is a good thing.

The two charts on the next page were e-mailed to you all in Email Alert 2020-06 (Jan. 12), where I warned of the rapidly eroding momentum in the S&P and initiated a combination of short SPY, long SPY puts and long UVXY. Those were all cashed out last week with excellent profits, albeit too early too really ring the register with the late-week downside extension (“crash”).

Since the turn of the year, I have constantly warned of the possibility of a stock market panic affecting the precious metals stocks adversely, and as it would turn out, that is exactly what we got in the final week of the month. A complete scramble for liquidity in all asset classes, not unlike 2008 and 1987, where the HUI lost 17.3% despite gold still being up 2.86% year to date. Shades of 1987, which I wrote about in January, were exactly what we got and while everything was impacted, my only saving grace was being stopped out of the GDX and GDXJ with modest profits (US$29.90 and US$41.20), after which they both went “no-bid.” We close out the month down 19.71% but sitting on a 41% cash position (and that does not count the profits from the short SPY, long put, and long volatility trades).

It was an ugly week and an ugly month but the GGMA portfolio survived, albeit not without a few bumps and bruises.

You will note that the red down arrow in the second chart pointed to the sub-3,000 level for the SPX ,so the monthly close at 2,988 was particularly prescient.

As for the SPX looking out to this week, the daily relative strength index (RSI) below 20 registers a Buy signal, but the weekly at 38.85 says that any buying next week is to be traded as the inevitable retest of the lows as a virtual shoe-in. For the precious metals exchange-traded funds (ETFs) to recover, I need this pervasive panic to end. Then, and only then, can we even discuss (let alone analyze) the Senior Gold Producers and how incredibly cheap they are.

As for the gold and silver mining stocks, with gold at $1,578 (where it closed two weeks ago), there is only one meaningful gauge upon which to rely, and that is the ratio of the HUI to gold prices. Last July, the HUI:GOLD ratio broke a long downtrend dating back to August 2016, which means that all the terrific technical work put in during the last three quarters has been vaporized by the left-right combo of mysophobia (fear of germs) and peniaphobia (fear of poverty). Just as the hyperbaric levitation of all things “paper” since Christmas Eve 2018, SPX at 2,351, made little sense to many of us, the events of the past two weeks made perfect sense to many of us. The algobots that chased these major markets to extreme valuations, while devoid of emotion, transformed themselves into ruthless sellers of equal intensity and indifference.

One of the symptoms of a troubled financial system is accelerated volatility and increasing crashes. In my early years, the old-timers used to talk about the 1973–1974 bear that nearly turned a generation of stockbrokers into a generation of cab drivers, as volatility faded away and apathy dominated.

The really old veterans would talk about fathers and uncles being wiped out in the ’29 crash but in my career, we only had one actual crash and that was in October 1987, fifty-four years after the “big one” that preceded the Great Depression.

Since then, we have had crashes in ’98, ’01, ’08, 2018 and now 2020. These cataclysmic selling sprees are occurring with greater frequency and violence than in prior times, and I lay it all at the feet of the central banks and the algobots. Gone forever are the days when retail panicked and instos bought, because here in 2020, a computer program launches a sell program and everyone runs for the diaper bag.

Now, I want you all to take a deep breath and look at this graphic. You have seen a similar one before in mid-January, during the week that I shorted the market, which showed only January 2019 (Extreme Fear at 26) and January 2020 (Extreme Greed at 97). The one below tells you everything. To be sure, it is an imperfect timing tool, but it is a foolproof risk-management tool. It helped me to avoid the 50–60% drawdowns that can torpedo careers.

It is flashing the green light, with a reading of “10” versus a near-impossible “97” three weeks ago. Furthermore, it is now 17 points lower than Christmas Eve 2018, when Trump, Mnuchin, and Powell teamed up to save the bull market in stocks.

Accordingly, I will have a few ideas in the subscriber section that I assure you will include the gold and silver stocks. Important as it is to get aggressive here, be it known that whenever I elect to buy after a crash, I do not make the mistake of going after the speculative juniors. I own a bunch of them and I will not sell any of my “penny dreadfuls,” but I learned over the years that you stay with the senior and intermediate miners for the rebound, and then reassess when the retest occurs. If it is a mild retest, you can venture into the little guys but if it is a deep retest, you stick with the big, liquid names.

Before I sign off after a really interesting week, I thought I would take a glance at the best performers in the two years after the 2007–2008 Great Financial Bailout Crisis, and wouldn’t I be the most shocked person in the room to see the TSX Venture Exchange leading the pack in terms of pure performance?

Not to get maudlin on you all but, despite my age and ornery, unsympathetic and unyielding disposition, I feel the pain of those who are getting slammed by this correction in a big way. If you are not grizzled with the scar tissue of prior crashes, you have little or no emotional defense against peniaphobia.

In my early days, where I was speaking to investors 24/7 about their savings, I used to give them the same advice my Jesuit math teacher used to give me when I was at his door the night before a final exam: “Why don’t you have faith in the work you have done in my class and go home and sleep on it?” That was always great advice, and I wound up with eight As in the math requisite thanks to him.

More importantly, my customers used to thank me for calming their fears, which resonated in a very big way and has become a life-long mission that I take very seriously.

As indicated earlier, I am ticked off that I wasn’t more aggressively short the S&P in light of all the warning signs that I posted since the beginning of the year, but I am pleased that we head into March able to allocate the 41% cash into record declines and ridiculous valuations. It is precisely at times like this, with fear running high, that I have to fight the urge to vegetate and muster up the intestinal fortitude to start buying.

The portfolio I have constructed is perfectly suited for a world floating on an ocean of false promises and unmanageable debt, and when this current excuse for profit-taking has ended, the steps taken to rectify the markets’ problems will be the same ones that will annihilate currencies across the planet, leaving gold and silver as the only mediums of exchange offering generational security.