Look For Weakness In The Stock Market Early This Week…Then Buy It! 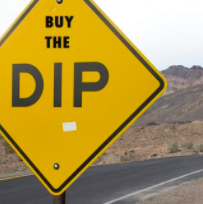 The market broke out to new all-time highs last week. However, the market internals suggest we will see a pullback early this week.

Breadth has rolled over and is now forming a downtrend/ bull flag (blue lines). In the intermediate-term, this sets the stage for a strong breakout to the upside. However, in the near-term (this week), the momentum looks downward.

What happens there is key.

Thus far the markets have been astonishingly strong despite some negative developments globally. Try as they might, the bears cannot muster a significant correction of any kind. All selling is muted and stocks bounce back harder than before in “V”-shaped rallies.

I believe this is because the market is “showing” us that President Trump is going to win the 2020 election in a landslide.

The fact is that the only way the Democrats can be Trump is at the ballot box, and looking at the betting odds (where real people invest money based on outcomes as opposed to useless polls), Trump is going to win in a landslide.

Now is the time to start investing in those areas of the market that will experience the biggest returns based on the Trump administration’s economic agenda during his second term.

Now is the time to start investing in those areas of the market that will experience the biggest returns based on the Trump administration’s economic agenda during his second term.

On that note, I recently posted a new special report titled The MAGA Portfolio: Five Investments That Will Make Fortunes During Trump’s Second Term.

In it, I detail five unique investments that I expect will produce the most extraordinary gains during President Trump’s second term.

Each one of these investments is in a unique position to profit from the combination of Trump economic reforms and Fed monetary easing, combining high growth opportunities with extreme profitability.