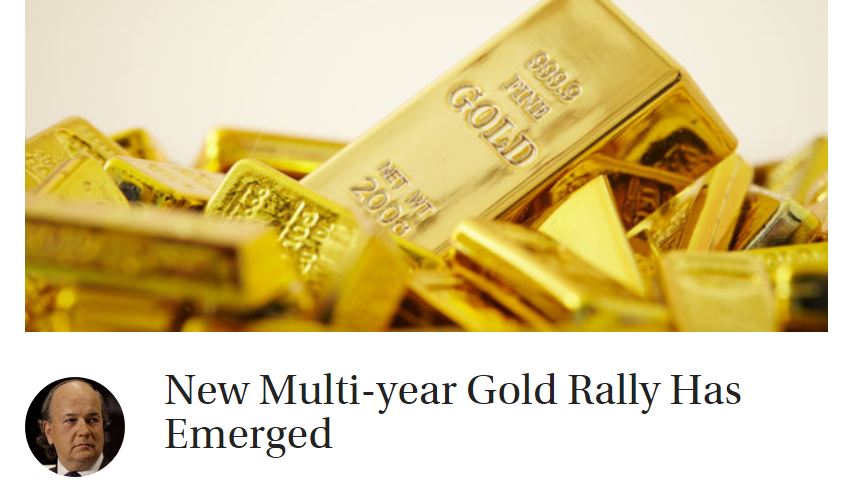 Jim says a multi-year rally has emerged, and both metals are going higher, but the nonsense about silver manipulation…

by Jim Rickards of Daily Reckoning

The dollar price of gold has been on a roller-coaster ride for the past six years. But the past six weeks have been a turbocharged version of that. Investors should expect more of the same for reasons explained below.

Then, gold nose-dived into a bear market from 2011 to 2015, falling to $1,050 per ounce in December 2015, a 45% crash from the peak and a 51% retracement of the 1999-2011 bull market. (Renowned investor Jim Rogers once told me that no commodity goes from a base price to the stratosphere without a 50% retracement along the way. Mission accomplished!)

The good news is that gold has now broken out to the upside. The $1,440 per ounce level is well within reach and the $1,400 per ounce level seems like a solid floor, despite occasional dips into $1,390 per ounce territory. Gold’s trading at $1,416 today.

More importantly, a new multi-year bull market has now emerged. Turning points from bear to bull markets (and vice versa) are not always recognized in real time because investors and analysts are too wedded to the old story to see that the new story has already started.

The first two factors have been driving the price of gold higher since 2015 and will continue to do so. Geopolitical hot spots (Korea, Crimea, Iran, Venezuela, China and Syria) remain unresolved and most are getting worse. Each flare-up drives a flight-to-safety that boosts gold along with Treasury notes.

The supply/demand situation remains favorable with Russia and China buying over 50 tons per month to build up their reserves while global mining output has been flat for five years.

The third factor, Fed policy, is the hardest to forecast and the most powerful on a day-to-day basis. The Fed has a policy rate-setting meeting on July 31. There is almost no chance the Fed will raise rates. The issue is whether they will cut rates or stand pat.

The case for cutting rates is strong. U.S. growth slowed in the second-quarter to 1.3% (according to the most recent estimate) from an annualized 3.1% in the first-quarter of 2019. Inflation continues to miss the Fed’s target of 2.0% year-over-year and has been declining recently. Trade war fears are adding to a global growth slowdown.

On the other hand, the June employment report showed strong job creation, continued wage gains, and increase labor force participation. All of those indicators correspond to higher future inflation under Fed models. The G20 summit between President Trump and President Xi of China led to a truce in the U.S.-China trade war and the prospect of continued talks to end the trade war.

This dynamic explains the erratic up-and-down price movements of the past week. The dynamic is likely to continue right up until the July 31 Fed meeting in two weeks.

With so much uncertainty and volatility in the dollar price of gold lately, what is the prospect for a rally in precious metals prices and stocks that track them?

Right now, my models are telling us that the gold rally will continue regardless of the Fed’s action on July 31.

If the Fed does not cut rates, gold may suffer a short-term drawdown, but markets will assume the Fed made a mistake. Expectations for a 50bp (0.5%) rate cut in September will start to build.

That new forward expectation will power gold higher just as surely as the missed July rate cut. That covers gold. But what about silver?

That analysis is almost entirely nonsense. There is no baseline silver/gold ratio. (The “16:1 ratio” is an historical legacy from silver mining lobbying in the late 19th century, a time of deflation, when farmers and miners were trying to ease the money supply by inflating the price of silver with a legislative link to gold.

The result was “bimetallism,” an early form of QE. The ratio had nothing to do with supply/demand, geology, or any other fundamental factor. Bimetallism failed and was replaced with a strict gold standard in 1900).

This means that over 80% of the movement in the price of silver can be explained by movements in the price of gold. The remaining silver price factors involve industrial demand unrelated to gold prices.

Given the historically high correlation between gold and silver price movements, and the recent lag in the silver rally, the analysis suggests that either gold will fall sharply or silver will rally sharply.

Since I have articulated the case for continued strength in gold prices, my expectation is that gold will continue to outpace silver.

Either way, both metals are heading higher.