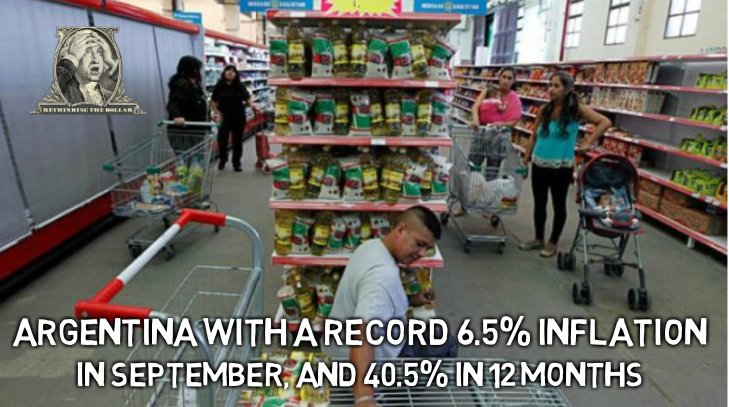 BUENOS AIRES – Argentina says that consumer prices rose 6.5% in September bringing the twelve months inflation rate to 40.5%, one of the world’s highest.

The inflation rate published by the official statistics agency Indec, on Wednesday follows a sharp devaluation of Argentina’s currency. The nine-month rate reached 32.4%.

The peso has depreciated more than half this year. That led the government to seek a large financing deal with the International Monetary Fund. Economic analysts estimate that consumer prices could rise nearly 45% this year and forecast that the economy will go into a deeper recession.

The Argentine Central Bank’s own REM (Market expectation survey) had predicted a rise of 5.9%, with inflation seen closing the year at around 44%. Core inflation, which discounts regulated and seasonally priced items, stood at 7.6%, the highest tally since Indec resumed measuring inflation on a monthly basis in 2016.

The top price increases in September were in transportation, which rose 10.4% and shoes and clothing, up 9.8%. Increases to utility rates that are part of a series of austerity measures have also fueled inflation. Food prices climbed 7%.

Meanwhile, U.S. central bankers in Washington expressed fears about instability in emerging economies, such as Argentina. Some U.S. Federal Reserve members warned that instability in emerging economies – many of which are heavily indebted and vulnerable when U.S. rates rise – could “spread more broadly through the global economy and financial markets,” publicized minutes of Fed meetings revealed.

Markets fear currency crises in Turkey and Argentina and other emerging market economies could spread beyond their borders – something that could be sparked as investors pull out to take advantage of higher rates in the United States.