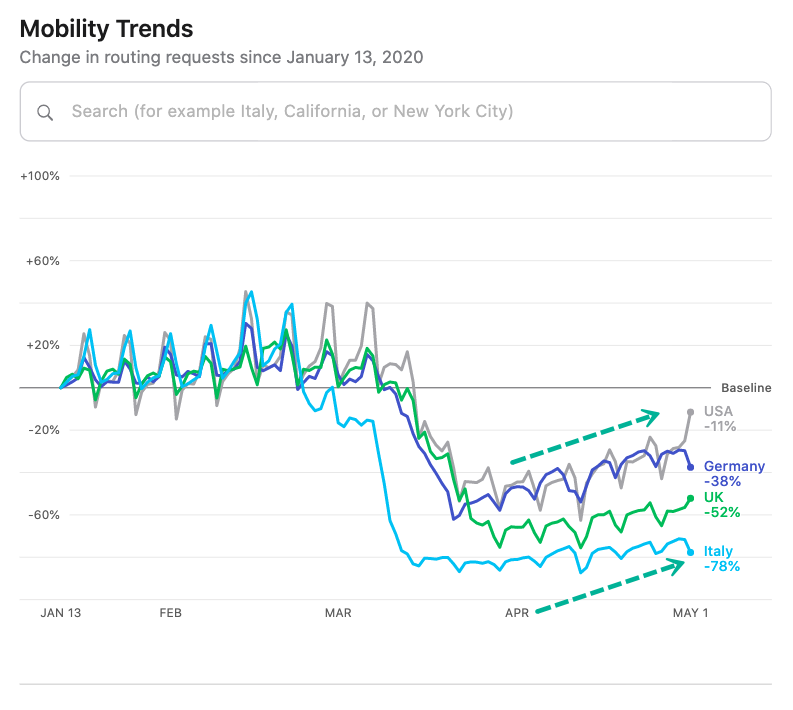 People across the Western world have already started to revolt against government-enforced lockdowns that have now continued for at least the seventh week in some places. Apple’s Mobility Trends and Foursquare payments data illustrates how shelter-in-place is becoming a distant memory for some as they try to restore their lives to what it was in pre-corona times.

The latest data from Apple’s Mobility Trends shows iPhone users in the US, Germany, UK, and Italy began to ignore stay-at-home orders around mid-April. While activity is still well below average trends from January 13, the recent rebound suggests more people are violating the orders

Apple’s Mobility data shows driving and walking in the US has surged since mid-April but still below average. Public transportation use remains troughed and has yet to rebound.

“People are feeling the itch to get back to the real world. As officials begin the process of relaxing some business restrictions, we’re starting to see upticks in foot traffic to various places. This is true across regions, regardless of state-specific policies,” Foursquare said in a blog post.

In the second half of April, Foursquare notes that foot traffic at various types of stores started to move higher. Here’s what they found:

Foursquare shows foot traffic at fast-food chains across all major US regions have bounced back to around baseline.

Gas station visits have also reverted in all regions to near baseline, slightly higher in the Midwest.

Note the mid-March surge in traffic at grocery stores was the panic hoarding period.

People in all regions are returning to big box stores, but as we all know, they’re wearing masks and gloves.

Slow return to convenience stores in all regions.

A surge in traffic to warehouse stores has been seen in the second half of April.

And while in lockdown, Americans in all regions rushed to hardware stores in late April to buy things for their homes – may be spring remodeling?

Liquor stores in all areas remained somewhat above trend during the lockdowns.

One place people aren’t going to is restaurants.

Dozens of states are attempting to reopen. Americans are panic searching “when can I leave my house.”

Apple and Foursquare data suggests many Americans are fed up with stay-at-home orders as they now venture out into a post-corona world. Such activity could be enough to spark a second coronavirus wave, and with a record amount of deaths seen on Friday, the virus crisis could be worsening.