Will The Global De-Dollarization Collapse The Greenback? 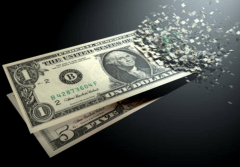 The U.S. dollar has been as good as gold for the last 70 years, enjoying its hegemony as the international reserve currency. Despite the Federal Reserve destroying the greenback’s value over the last 100 years, foreign governments, central banks, and global financial markets have depended on the buck for everything, from its status as a safe-haven asset to its use in worldwide transactions. As the saying goes, all good things must come to an end, and it might be time to bid farewell to the dollar.

The War On The Dollar

In the last several years, the world has started to witness an incremental de-dollarization push by a handful of nations. The process of reducing dollar holdings, using local denominations, and taking part in currency swaps has become ubiquitous. Right now, it is only America’s so-called adversaries, such as Russia, Iran, and China, that are leading this movement. But the data suggest more states are gradually attempting to dethrone the dollar.

Major oil producers and some of the world’s largest exporters have halted the accumulation of U.S. debt securities. In October 2014, China and Russia signed a three-year ruble-yuan currency swap agreement worth up to $25 billion, aimed at increasing trade with these currencies. In September 2017, the Russian government approved legislation that made the ruble the main currency of exchange at all Russian seaports. Zimbabwe, Venezuela, and Iran have either diminished their acceptance of the dollar or have refused it entirely. Germany has requested a new independent payment system, suggesting that it wants alternatives to the buck.

With Iran isolated from the international community, a growing number of jurisdictions are getting frustrated because they want to do business with Tehran. This desire to conduct trade with one of the largest crude producers in the world might motivate governments and central banks to de-dollarize, says Anne Korin from the Institute for the Analysis of Global Security. She told RT last month:

“We don’t know what’s going to come next, but what we do know is that the current situation is unsustainable. You have a growing club of countries — very powerful countries.

Whatever the case, central banks have revealed their consternation as of late. According to the World Gold Council (WGC), central banks have purchased an all-time high of 375 tons of gold this year (so far). It might only account for one-fifth of the total global gold demand, but the trend does lead to some interesting speculations for these purchases. In the aftermath of the recession, these institutions were scooping up bullion to protect themselves from the uncertainty and chaos. Today, they may be preparing for another economic calamity or, perhaps, they are getting ready for instability that would transpire during the transition away from the dollar.

A lot of folks from all political persuasions enjoy taking digs at the U.S. dollar. Considering the state of the basket of currencies, you can only wonder if the de-dollarization instigators know what they are getting themselves into. It is not as if they are begging for an end to fiat money and a relaunch of gold-backed money – or, free-market currency.

Let’s be honest: Compared to other currencies, the dollar is sound money. The yuan is crumbling, the ruble is worthless, the Canadian dollar is treading water, the euro is being systematically destroyed by the European Central Bank (ECB), and the Australian dollar seems fine where it is on the currency hierarchy. You could make the case for the Swiss franc to topple the dollar, but the issue is that the Swiss National Bank (SNB) is trying to curtail its immense demand and is debasing the franc.

International commerce might eventually warm up to an exotic currency dominating trade. However, people – investors, consumers, and entrepreneurs – are resistant to change. They like commonality. The U.S. dollar and the euro are successful because of familiarity – everyone knows how to trade them. It is a lot more difficult to trade with the ruble or other highly volatile currencies.

It is also important to remember right now that the U.S. dollar has lost much confidence in financial markets. The trade war, political turmoil in Washington, and contentious relationships worldwide – the buck has survived quite a bit in the last few years. It is why markets called it a Teflon-dollar. Even if Sen. Bernie Sanders (I-VT) or Sen. Elizabeth Warren (D-MA) were to win the 2020 presidential election, the world would still be enamored with the dollar.

Should the de-dollarization kick into high gear, it will still take decades for local currencies to overtake the buck. Of course, a dollar crisis, which is quite possible in the not so distant future, could speed up the move. The national debt has topped $23 trillion, the federal government is recording trillion-dollar budget deficits, and Washington faces more than $200 trillion in unfunded liabilities expenditures. It is hard to envision the greenback surviving another 50 years.

As we brace for the dollar’s inevitable demise or as we perform an autopsy to find out what happened, there will always be a segment of the population that will try to blame one specific person. In this case, millions of Americans will blame President Donald Trump, even if the dollar’s evisceration happens in the next 25, 50, or 100 years. But the slow push away happened before Trump – and it will continue when he leaves office. It has been a collective effort involving the smartest men and women in the White House, on Capitol Hill, and within the confines of the Eccles Building. There is no creature from the black lagoon; it will be the entire population of the Swamp that will have triggered the dollar collapse.
Authored by Andrew Moran via LibertyNation.com,