Why Is America Being Hit By So Many Horrific Natural Disasters All Of A Sudden? 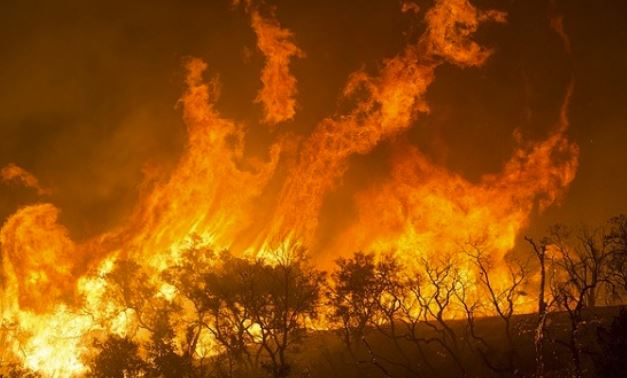 It has just been one thing after another in 2020.  First, the COVID-19 pandemic erupted and quickly spread all over the globe.

At this point more than 800,000 people have died globally, and authorities are warning us to brace ourselves for another wave of the pandemic in the fall.  Of course many would argue that fear of the virus has been even worse than the disease itself, and it is undeniable that the COVID-19 shutdowns were the primary reason why we have plunged into the worst economic downturn since the Great Depression of the 1930s.  More than 57 million Americans have filed new claims for unemployment benefits so far this year, and that number just keeps rising with each passing week.

On top of all that, the tragic death of George Floyd caused an unprecedented wave of civil unrest to erupt in major cities all across America, and many are anticipating a fresh outburst of unrest as we head toward election day in November.  So coming into this month we had already faced far more trouble than we do in a typical year, and now a very strange series of natural disasters is making things even worse.

For example, earlier this month an absolutely massive storm known as a “derecho” with winds of up to 112 mph came roaring through the Midwest.  Millions upon millions of acres of crops were destroyed, and Iowa Governor Kim Reynolds has described this storm as a “40-mile-wide tornado that went through the state of Iowa”…

Shannon Textor, who is a spokesperson for the Iowa Corn Growers Association, reported that it may be weeks to determine the monetary loss as a result of the storm. “It’s really hard to get your arms around the devastation at this point,” Textor admitted.

President Donald Trump took notice of the destruction and on Tuesday discussed the damage and promised Iowans the “full support of the federal government in recovery. According to Iowa Governor. Kim Reynolds, the devastation caused an estimated $4 billion in damages from the storm. During a briefing with the president, Reynolds described the storm as a “40-mile-wide tornado that went through the state of Iowa.”

Shortly after that historic storm ripped a giant scar across the Midwest, the western half of the nation was gripped by a historic heatwave.

The highest temperature ever captured by modern instruments was recorded in Death Valley, California, many other all-time records were shattered all over the Southwest, and the city of Phoenix actually broke their record for most days in a year in which the high temperature reached at least 115 degrees.

Of course that heatwave set the stage for the nightmarish wildfires that we are witnessing in the state of California right now.

Yes, we see wildfires in California every year, but we have never seen anything quite like this.  Just consider the following facts…

-12,000 lightning strikes have hit the state over the past week, and many more are expected this week.

-More than a million acres have been destroyed by fire so far.

-Two of the five largest fires in the history of the state are burning in northern California right now.

-Wildfires in California have already caused more death and destruction in 2020 than they did in all of 2019.

-A “red flag” warning has been issued for Monday.  Authorities are anticipating that winds of up to 65 mph and widespread lightning strikes will make this crisis even worse.

For much more on these wildfires, please see my article entitled “The State Of California Is Never Going To Be The Same After This”.

As if everything that I have shared so far wasn’t enough, two very dangerous storms are headed toward the Gulf Coast.

Hurricane Marco is likely to make landfall first, and residents of the Gulf Coast will begin to feel Marco’s fury as early as Monday morning…

At 5 p.m. CDT on Sunday, Marco strengthened to a Category 1 hurricane with maximum sustained winds of 75 mph and was moving to the north-northwest at 13 mph.

Forecasters warn that time is running out for residents along the central Gulf Coast to make preparations, as impacts will start to be felt early Monday morning. Marco is expected to continue intensifying through Sunday.

Following closely on the heels of Hurricane Marco is Tropical Storm Laura.

Laura will likely enter the Gulf of Mexico early this week, and forecasters fully expect it to also develop into a hurricane…

Tropical Storm Laura is forecast to reach the Gulf of Mexico early this week, where significant intensification into a hurricane is expected. The area with the highest chance of seeing a hurricane strike from Laura by midweek is along parts of the northern and western Gulf Coast, but this forecast is still uncertain.

At this point, many are anticipating that Laura will end up being the stronger of the two storms, but we shall have to wait and see how everything plays out.

Meanwhile, much of the other side of the globe continues to wrestle with a historic plague of locusts.  Some of these swarms of locusts are the size of major cities, and it would be difficult to overstate the crop devastation that we have been witnessing in many countries.

When combined with the tremendous impact that COVID-19 has been having on global food distribution systems, these two factors have created a tremendous worldwide crisis.  In fact, the head of the UN World Food Program has once again used the word “biblical” to describe the famine that the planet is potentially facing…

The Covid-19 pandemic may lead to a calamity of epic scale, with millions facing starvation worldwide, the head of the UN’s hunger-fighting body has warned.

“All the data we have, including WFP forecast that the number of people experiencing malnutrition will grow by 80 percent by the end of the year, … points to a real disaster,” David Beasley, Executive Director of the UN World Food Program (WFP), said.

“We are risking a famine of biblical proportions.”

2020 has truly been a year like no other, and it is imperative for everyone to understand that the “perfect storm” that we are now facing is just getting started.

All of a sudden, the U.S. is being hit by one major crisis after another, and to many people it seems quite unlikely that so many nightmarish events would happen so closely together by random chance.

So what do you think?

Could it be possible that someone is trying to get our attention?

It would be a major understatement to say that 2020 has been a “crazy” year so far, and I have a feeling that quite a few more surprises are in store for us before this year is over.

by Michael Snyder of End of the American Dream