Who’s Behind “Mysterious Explosions” at US Gas Facilities? 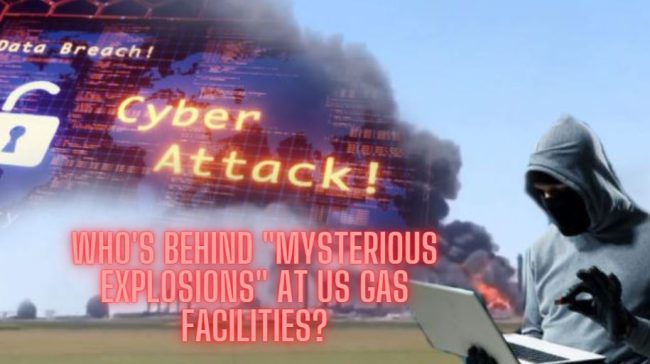 Are we under attack? I’ve already talked about the strange fires that have happened this year at some of the most important food-making plants in the United States. The authorities say that all of these fires were “accidents,” and they might be right. But now the same thing is starting to happen in the energy industry.

During the last two months, there have been a number of “mysterious explosions” at natural gas plants in the United States. The price of natural gas was already going up a lot all over the world, so this string of disasters couldn’t have come at a worse time.

On Saturday, a very important natural gas facility in Medford, Oklahoma, blew up in a huge explosion that made news all over the country.

A big fire broke out Saturday afternoon at a natural gas plant in the small town of Medford in northern Oklahoma. A video that was shared on social media showed thick flames and smoke going up hundreds of feet.

This fire started because of a big explosion that caused “a 1.74 magnitude earthquake.”

Massive explosion at a natural gas plant in Oklahoma. Caused a 1.74 magnitude earthquake.

The black smoke that came from the plant could be seen from many miles away, and the damage is likely to keep the plant from running smoothly for a long time. Another “mysterious explosion” happened near Houston, Texas, just two days before.

People who were close to the explosion say they heard “a loud pop.

Is it normal for there to be two big natural gas explosions in just three days?

GET YOUR WEIGHT UP! Take advantage of the BullionMax silver offer for the RTD community.

And it’s important to remember that there have been other “suspicious explosions” recently.

Last month, a huge explosion at a liquefied natural gas terminal in Quintana Island, Texas, “took a large amount of the fuel off the market.”

So, who would all of this help?

I think it’s important to ask that question.

Some people think that the Russians might be responsible for these “accidents.” Tom Rogan, the editor of the Washington Examiner, says that the Russians do have a cyber unit that is fully capable of carrying out these kinds of attacks.

There are probably similar cyber units in both the west and Asia that could be doing similar things for their own reasons.

Even if we could prove that cyberattacks are causing these explosions, we probably will never find out who was really behind them.

This is just one more reason why having so much of our important infrastructure connected to the Internet is a big threat to our national security.

Cyberattacks are getting more and more complicated, and we are very vulnerable to them.

Many people on the Internet are talking about the strange fire that happened in Valdez, Alaska on June 27.

In the past, a fire like that wouldn’t have even been mentioned in the news.

But now that there are so many other fires, people are on high alert.

Strange accidents keep happening over and over again, and people want to know why.

I wish I knew the answer to everything, but I don’t. I’m just trying to ask the right questions, like many of you. I do know that we live in a very chaotic time, and I have a feeling that things are about to get a lot worse.

I’m sure that the second half of this year will be even crazier than the first half, which is saying a lot.