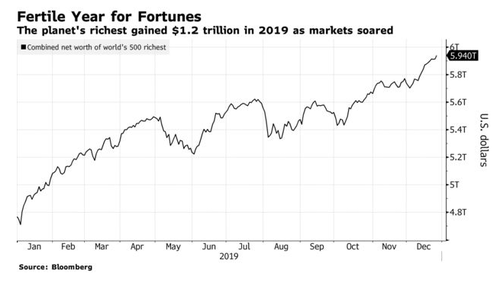 At the same time that dipshits future Nobel Prize winners at the Fed like Neel Kashkari are walking around pondering why the inequality gap continues to widen in the United States, monetary policy has catalyzed another year of surging wealth for the richest in the country while keeping its boot on the neck of the poorest.

In fact, as Bloomberg notes, the wealth of the 500 richest people surged 25% in 2019. And the riches are coming in atypical fashion.

Among those are social media giants like Kylie Jenner, who became the youngest self-made billionaire this year after her cosmetic company signed an exclusive partnership with Ulta Beauty. She sold a 51% stake in her company for $600 million.

Another great example is Willis Johnson, who made his $1.9 billion fortune by building a network of junkyards to sell damaged cars.

All of these are examples of just how much money made its way to the richest over the last 12 months. The Bloomberg Billionaires Index added $1.2 trillion, now placing their collective net worth at $5.9 trillion.

Only 52 people on the ranking saw their fortunes decline during the year. Jeff Bezos, for example, lost $9 billion – but only due to his divorce.

With the market hitting new highs every day and President Trump’s relentless pressure on the Fed to keep rates low, the gap will likely continue to widen heading into 2020 – a year politicians will undoubtedly spend bickering about proposed solutions to the problem, all the while failing to understand that the alarm is coming from the inside, right before their eyes.

The gains are an obvious continued indicator of flawed monetary policy that everybody – except those at the Fed (and Steve Liesman) seems to understand.