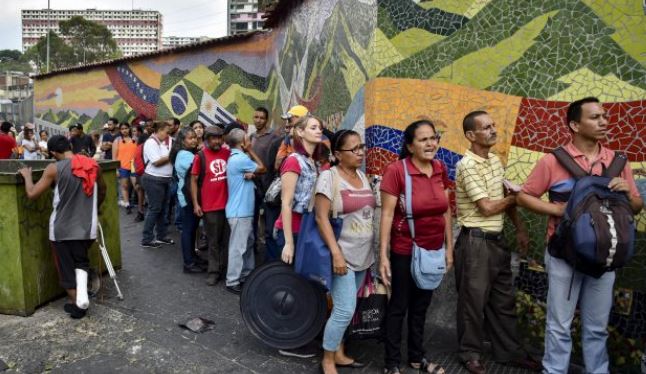 The GDP and inflation numbers—which hadn’t been released by the bank in almost four years—confirmed the beliefs of economists and international organizations: The country’s economic crisis is one of the biggest in Latin America’s recent history.

According to the figures, Venezuela’s GDP has fallen about 52 percent since Nicolás Maduro succeeded Hugo Chavez, the architect of the country’s failing socialist “Chavista revolution,” who died in 2013.

In the third quarter of 2018, the economy shrank almost 23 percent from the year-earlier period, demonstrating the intensification of the economic crisis that has caused more than 3 million people to flee the nation since 2015.

The figures are also the first explicit acceptance from the Maduro regime that it’s responsible for the country’s rapid economic decline, analysts say.

“What’s really incredible is that the Venezuelan state has now confirmed that Maduro’s government has caused the economy to shrink by 50 percent. This is confirmation of what an economic disaster Maduro has been for Venezuela,” said Geoff Ramsey, assistant director for Venezuela at the Washington Office on Latin America (WOLA).

Widespread food and medicine shortages, alongside rampant hyperinflation and deteriorating security conditions, continue to cause thousands to flee for other Latin American nations each day.

Exports of oil, the OPEC nation’s key export, slumped to a new low of $29.8 billion in 2018, from $31.5 billion in 2017, the central bank said. Oil production has plummeted in recent years due to pervasive corruption within the military-run state oil firm PDVSA.

The figures are an acceptance that the country is in a “deep depression,” said Asdrubal Oliveros, director of the Caracas-based economics consultancy Ecoanalitica. “It’s an economy of a country at war, but without ever actually having gone through one.”

The central bank abandoned the standard practice of publishing monthly figures in 2015 to obscure the true depth of the crisis, leaving many to speculate about the motive behind the surprise publication.

The most likely cause was the “position of vulnerability” that Venezuela currently has with international organizations such as the IMF, where the lack of official statistics form part of the debate over whether to recognize opposition leader Juan Guaidó as the legitimate leader of Venezuela, Oliveros said.

Guaidó is recognized by more than 50 nations as the legitimate interim president in place of Maduro, who is widely believed to have secured his second term in fraudulent elections.

“Venezuela likely decided to publish figures to avoid discussion around the possible recognition of Guaidó advancing in the IMF and World Bank, which would be a significant defeat for Maduro,” Oliveros said.

The figures released by the Maduro regime show that inflation—which has made physical currency almost worthless and rendered even the most basic of items unaffordable—reached 130,060 percent in 2018, compared to 180.9 percent in 2015.

The reported numbers confirm that the country is in the grips of hyperinflation, but were significantly lower than the estimates from the likes of the IMF. The IMF estimated that inflation was 1.37 million percent in 2018 and would reach 10 million percent by 2019.

Some analysts and independent economists say that the government figures were likely altered to offer a rosier view of the country under Maduro.

“I think the bank’s inflation numbers are clearly suspect. While it’s positive that we’re finally seeing something close to official public data, it seems pretty clear that these numbers have been heavily massaged,” Ramsey said.

The Maduro regime had previously blamed the country’s economic downfall on a collapse in oil prices and sabotage from neighboring Colombia, but now points to sanctions by the United States that are intended to pile pressure on Maduro and support Guaidó.

Guaidó has yet to break an impasse with the regime since he invoked the constitution in January to appoint himself interim president. While talks held in Norway in recent weeks were intended to peacefully break the deadlock, no agreement was reached, Guaidó’s team announced on May 29.