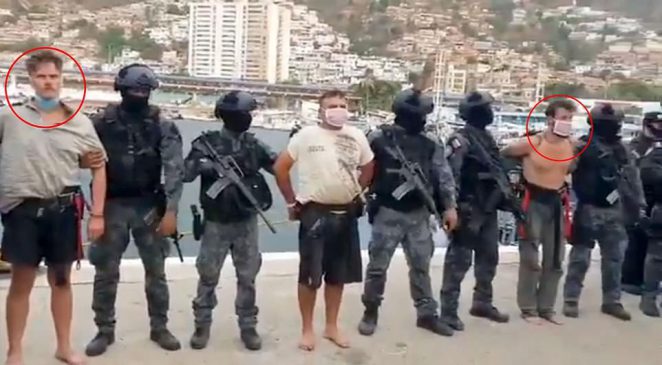 An astounding and unexpected development which is about to launch US regime change efforts in Venezuela straight back into the headlines. The Maduro government says it has captured two Americans it say were leading an armed coup effort. CNN reports:

Venezuelan President Nicolas Maduro says two American “mercenaries” have been apprehended after a failed coup attempt launched over the weekend.

In a live address on state television late Monday, Maduro brandished what he claimed were the US passports and drivers licenses of the two men, along with what he said were their ID cards for Silvercorp, a Florida-based security services company.

Luke Denman, 34 (left) and Airan Berry,41 (right), being paraded in front of Venezuelan state TV cameras after their arrests Monday.

Silvercorp, it must be remembered from our reporting days ago based on the Associated Press, is a Flordia-based private security firm founded by a former Green Beret soldier who hooked up with Venezuelan military officer defectors for a half-baked ‘armed invasion’ of the socialist country in order to overthrow Maduro.

Airing photos of the men on state television, Maduro further described the pair were playing “Rambo” illegally in his country. And further:

Footage posted on Maduro’s official Twitter account shows several unidentifiable men in a boat with their hands in the air and a helicopter overhead. The men in the boat were not identifiable in one video, but a separate photo more clearly depicted two men who Maduro claimed were American.

One of the now detained men apparently even had a US military ID on him:

It total Maduro said 13 “terrorists” had been captured by authorities in connection with a bid to invade the country and stoke insurrection on Sunday.

Maduro paraded what were described as passports and other identification cards of Aaron Berry and Luke Denman, described as employees of Silvercorp.