US Net Worth Hits All Time High: Just 10% Of Americans Now Own $91 Trillion In Assets 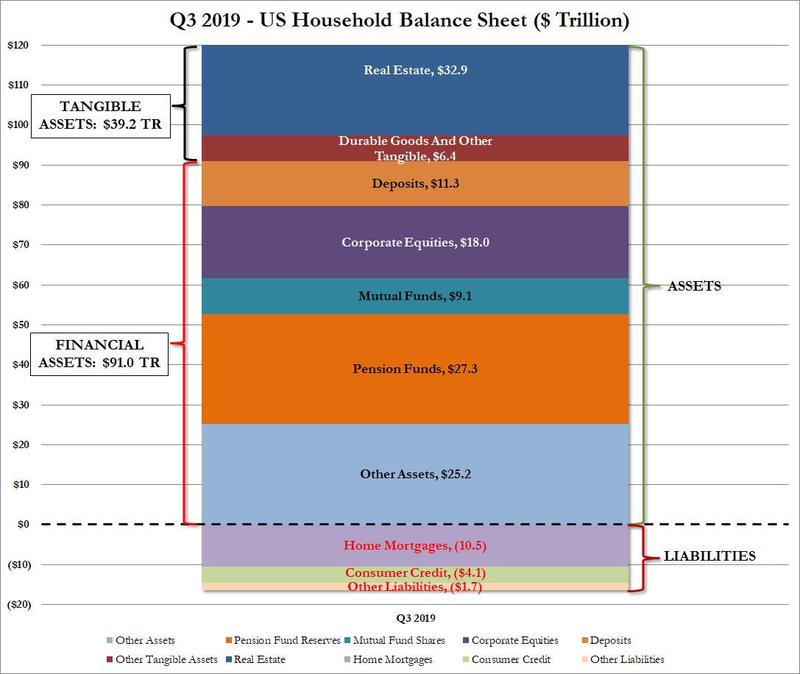 In the third quarter, when the S&P500 rose to a new all time high, so did US financial assets according to the latest just released Flow of Funds report published today by the Fed. Also known as the Fed’s Z.1 statement, it revealed that with $130.2 trillion in assets and a modest $16.4 trillion in liabilities, the net worth of US households rose to a new all time high of $113.8 trillion, up $574 billion in last quarter, its third consecutive increase following the $3.9 trillion drop in Q4 of 2018 and bringing the total increase in 2019 to $7.614 trillion.

At the same time total liabilities, i.e., household borrowings, rose by $176 billion from $16.21 trillion to $16.39 trillion, the bulk of which was $10.5 trillion in home mortgages. Homeowners’ real estate holdings minus the change in mortgage debt rose by $299 billion (a positive number means that the value of real estate is growing at a faster pace than household mortgage debt).

And here is the historical change of the US household balance sheet: it shows that US household net worth and the stock market are intimately linked, rising and falling together.

And since the bulk of net worth is held by a tiny fraction of US households, the increase in mostly financial assets and net worth in the last quarter only truly affected a sliver of the population, since most of America’s assets are held in financial market derivatives.

Which once again brings up the age old problem of the US wealth divide: as the following chart from Deutsche Bank shows, the wealth inequality in the US is now as bad as it just during the Great Depression, with the top 0.1% of the US population owning as many assets as the bottom 90%.

Worse, as we showed two weeks ago, the top 10% now own 70% of all the US wealth, the same as the middle and lower classes combined…

And the scariest chart of all: whereas total household net worth is indeed at an all time high, it is mostly benefiting the Top 1%, as the Fed’s ZIRP and QE have been behind the greatest wealth redistribution in the past decade

In other words, roughly 70% of the latest $574BN increase in assets went to benefit just 10% of the population, who also account for roughly 70% of America’s financial net worth.