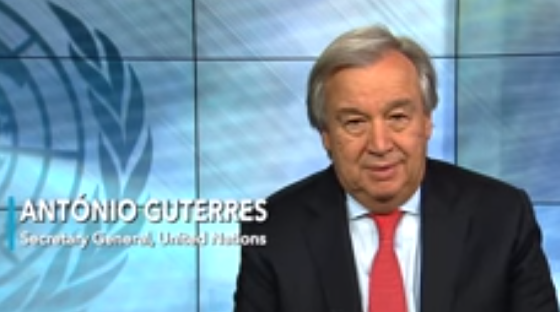 More and more global leaders sound the alarm that the world economy is headed for a difficult period in 2020.

Unlike several years ago, leaders across the world are now calling for immediate deployment of fiscal stimulus, but not monetary stimulus, a sign that central banks are out of ammunition to combat the next economic crisis.

UN Secretary-General António Guterres warned that the global economic outlook is facing severe headwinds, and the international community must quickly act to “do everything possible” to prevent the world from “fracturing,” mostly due to the US and China trade war.

Guterres spoke on Saturday at the World Bank Group and IMF Annual Meetings in Washington, DC.

He said that “during tense and testing times,” he “fears the possibility of a Great Fracture – with the two largest economies splitting the globe in two – each with its own dominant currency, trade and financial rules, its own internet and artificial intelligence capacities and its own zero-sum geopolitical and military strategies.”

He told international bankers that “it is not too late to avoid” this fracturing of the world, but “we must do everything possible to avert this…and maintain a universal economy with universal respect for international law; a multipolar world with strong multilateral institutions, such as the World Bank and IMF.”

At the #WBGMeetings, @antonioguterres stressed we must do everything possible to maintain a universal economy with respect for international law; a multipolar world with strong multilateral institutions, such as the @WorldBank & @IMFNews. His remarks: https://www.un.org/sg/en/latest/sg/statement …Latest Statementsun.org184:22 PM – Oct 19, 2019Twitter Ads info and privacy17 people are talking about this

Guterres told government officials and bankers they must conduct three fiscal policies in the 2020s to save the world economy:

Guterres’ comments over the weekend come as the world economy has entered a “synchronized global slowdown,” with one of the weakest growth outlooks since the Lehman crisis in 2008.

The IMF made a fifth-straight cut to its 2019 global growth forecast last week, citing a broad deceleration across the world’s largest economies as trade tensions undermine the expansion.

“There is no room for policy mistakes and an urgent need for policymakers to cooperatively de-escalate trade and geopolitical tensions.”

The IMF estimates that 90% of the world sees slower growth. This is a considerable change to the global economy from two years ago, when growth was accelerating across three-quarters of the globe in a synchronized upswing.

Central banks have depleted their toolkits with interest rate policies around the world at zero or negative, and that is precisely why Guterres is calling for fiscal policies to play a more significant role in boosting economic activity.

Eric Basmajian, of EPB Macro Research, beautifully illustrates in a series of charts how the effectiveness of monetary policy across the world is dying.

As economies become more indebted, central bank policy loses its efficacy in a concept often referred to as “pushing on a string.” Central banks are trying to ease conditions, but some monetary aggregates are unresponsive. Luckily, this is not the case in the United States (yet) as money supply growth started to inflect after the Federal Reserve shifted from rate hikes and “QT” to rate cuts and “New QE.” China, however, may have a problem of its own.

Since the start of 2019, “China Stimulus” was an overused talking point.

Ironically, despite the headlines, the stimulus is not apparent in the rate of Chinese money growth. Moreover, the rate of money growth in China is sitting at one of the lowest levels since reported data is available,” Basmajian wrote.

So it’s becoming increasingly evident that China, one of the most powerful economic growth engines of the world, can’t stimulate its economy nor the rest of the world through monetary stimulus. Global leaders understand that monetary tool kits with central banks have entirely run out of ammunition, that is why we hear the calls for fiscal stimulus.

Even if central bankers avoid a global recession/depression, the next upswing in the global economy is going to be significantly weaker than before. But if policymakers don’t have the tools, nor coordination globally to implement fiscal policy, then it’s likely a global recession is dead ahead.

We must also note that the trade war didn’t cause the global slowdown, it was the death of monetary stimulus that did, along with over-indebtedness of countries that could no longer stimulate growth.