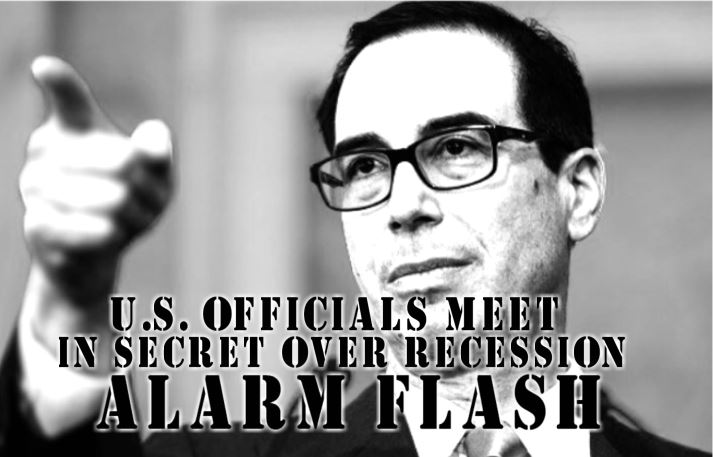 The Financial Stability Oversight Council, a panel of top U.S. regulators charged with preventing future financial crises, met Thursday to discuss the past decade’s surge in corporate borrowing, much of it by companies with junk-grade credit rating. An economic downturn likely would bring a wave of credit-rating downgrades and debt defaults that could ripple across markets.

U.S. Treasury Secretary Steven Mnuchin on Thursday led a secret meeting of top U.S. financial regulators on the risks to global markets from the recent surge in corporate borrowing — a growing concern as fears mount that the economy might be headed for a slowdown or a recession.

The Financial Stability Oversight Council, formed in the wake of the 2008 financial crisis to prevent a repeat, met “in executive session,” or behind closed doors, according to a statement released by the Treasury Department’s public-affairs unit following the meeting.

Members of the group include Federal Reserve Chairman Jerome Powell as well as the heads of the Office of the Comptroller of the Currency, Federal Deposit Insurance Corp., Consumer Financial Protection Bureau, Securities and Exchange Commission and Commodity Futures Trading Commission.

No details were provided on the gist of the discussion, though according to the statement the panel heard an “update” from Craig Phillips, a counselor to Mnuchin, on recent market developments involving “corporate credit and leveraged lending.”

Leveraged lending is the financial industry’s term for the practice of making loans to companies with poor credit ratings, colloquially known as junk. Historically, the market was dominated by banks, but in recent years investment firms and other non-bank lenders joined in; the outstanding amount of the loans has mushroomed over the past decade to about $1.2 trillion, eclipsing the more-established junk-bond market.

There’s also been a surge in borrowing by companies with triple-B ratings, which rank just above junk but could face dire downgrades if an economic slowdown shrinks profits for those borrowers. That category of debt has climbed to an unprecedented level of more than $3 trillion, according to Standard & Poor’s, sparking warnings from officials including Robert Kaplan, president of the Federal Reserve Bank of Dallas.

The concern is that if the economy falters, loan losses would climb dramatically and other companies would be more likely to default on their outstanding bonds.

Minutes from the Financial Stability Oversight Council’s March 6 meeting, released Thursday, show that Ted Berg, a Treasury Department researcher, warned panel members that even the non-junk debt could see $300 million to $1 trillion of credit-rating downgrades during the next downturn.

Since then, President Donald Trump’s trade war with China has intensified, casting a pall over global markets. The Federal Reserve Bank of New York estimates that the president’s new tariffs could add about $800 to the average household’s annual costs while hurting business sales and potentially pushing the U.S. into its first recession in a decade.

“Credit stresses are multiplying,” analysts at Bank of America, the second-biggest U.S. lender, wrote last week in a report. “Reduced risk appetite leads to restricted capital access, which in turn has the potential to set the stage for elevated distress and eventual defaults.”

In recent days, yields on 10-year U.S. Treasury notes have slipped below those on shorter-term bills and notes — an unusual phenomenon known as a “yield-curve inversion” since investors usually demand higher returns to compensate for the extra risk that comes with a longer payback period. It’s often seen as a classic sign of an impending recession.

The borrowing binge by U.S. companies has garnered so much attention from investors lately that Powell, the Fed chairman, devoted an entire speech to the topic on May 20. He said there’s currently a “moderate” risk that business debt triggers a full-blown financial crisis, although “the level of debt certainly could stress borrowers if the economy weakens.”

“Once again, we see a category of debt that is growing faster than the income of the borrowers even as lenders loosen underwriting standards,” Powell said.

The Office of the Comptroller of the Currency, a branch of the Treasury Department that supervises national banks, wrote in a May 20 report that “years of growth, incremental easing in underwriting, risk layering and building credit concentrations result in accumulated risk.”

The corporate-lending surge has been fueled by firms like Blackstone (BX – Get Report) and Apollo Global Management (APO – Get Report) , which rely on junk-grade loans to finance the acquisitions they make through their private-investment funds.

In recent years, the firms have also waded into the corporate-lending business themselves and they now routinely package junk loans into new bonds known as “collateralized loan obligations,” or CLOs — some with pristine triple-A ratings that can be easily sold on to investors with promises of attractive yields.

U.S. Sen. Elizabeth Warren, a Massachusetts Democrat and declared 2020 presidential candidate, has likened the process to Wall Street’s assembly-line-style packaging of subprime mortgages into triple-A rated bonds in the years before the 2008 crisis.

Indeed, with U.S. banks facing tighter scrutiny over the past decade, the private-equity industry has had almost free rein to take over a bigger portion of the financial markets. The five biggest private-equity firms, including Powell’s former employer, Carlyle Group, now manage some $1.37 trillion of client money overall, based on a tally by TheStreet.

Mnuchin and other Treasury officials have proposed to exempt these “non-bank firms” from getting designated as “systemically important” — a label that would subject them to much tougher oversight. Instead, regulators would supervise the firms’ “activities.”

According to Thursday’s statement, the oversight council “heard a presentation from Treasury staff” on public comments submitted in response to Mnuchin’s proposal.

The presentation wasn’t released, but the comments are publicly available on a government website. They include a May 13 letter to Mnuchin from the American Investment Council, the main U.S. trade association for private-equity firms, advocating for the exemption.

“Regulation, of course, carries burdens for individual firms, but these consequences have to be measured against the tragic and indiscriminate costs of a crisis,” they wrote to Mnuchin and Powell in a joint letter, also dated May 13.