Turkey Repatriates Gold From USA To Ditch The Dollar 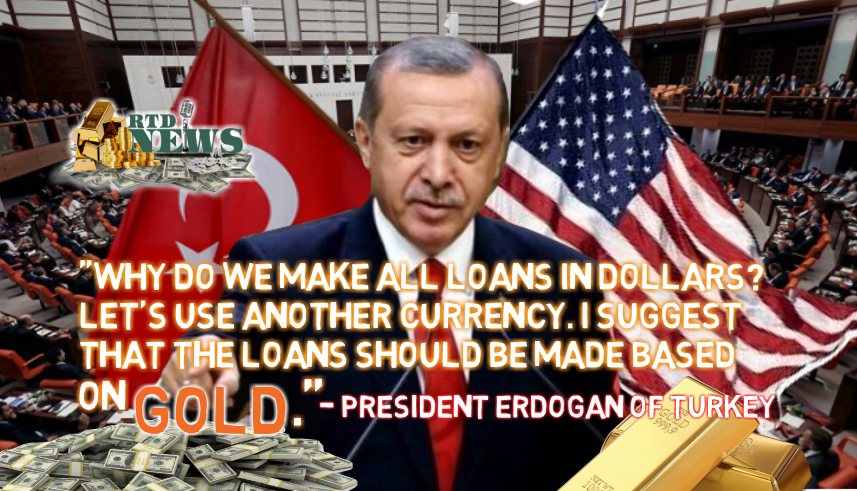 Article appeared in RT News (Here)
Ankara has decided to bring back all its gold stored in the US Federal Reserve, according to Turkish media. In recent years, Turkey repatriated 220 tons of gold from abroad, and 28.7 tons was brought back from the US last year.

Turkey’s gold reserves are estimated at 564 tons and are worth about $20 billion, Turkish newspaper Yeni Safak reported. This makes Ankara the 11th largest gold holder, behind the Netherlands and ahead of India. The reports come at a time when Turkish President Recep Tayyip Erdogan has taken a tough stance against the US currency.

This week he criticized dollar loans and said that international loans should be given in gold instead. “Why do we make all loans in dollars? Let’s use another currency. I suggest that the loans should be made based on gold,” Erdoğan said during a speech at the Global Entrepreneurship Congress in Istanbul on April 16, according to Hurriyet.

On April 11, the Turkish lira hit a record low against the dollar.

Turkey is among several countries which have been moving gold from the US. The wave began in 2012, when Venezuela announced it was repatriating 160 tons of gold, valued at around $9 billion. Germany’s Bundesbank then demanded 300 tons be returned, with the Fed saying it would take seven years to do so. The Netherlands has also repatriated 122.5 tons of gold.

“The central banks started the repatriation already a few years ago, meaning before we had Brexit, Catalonia, Trump, AFD or the rising tensions between the Politburo in Brussels and the nations of Eastern Europe,” Claudio Grass of Precious Metal Advisory Switzerland told RT.

According to him, the world is becoming less centralized. “If we follow this trend, it should be obvious that the next step should be an even bigger break up into smaller units than the nation state. With such geopolitical fragmentation comes also the decentralization of power.”