Trump Will Get His Weak FRN..100% Guaranteed 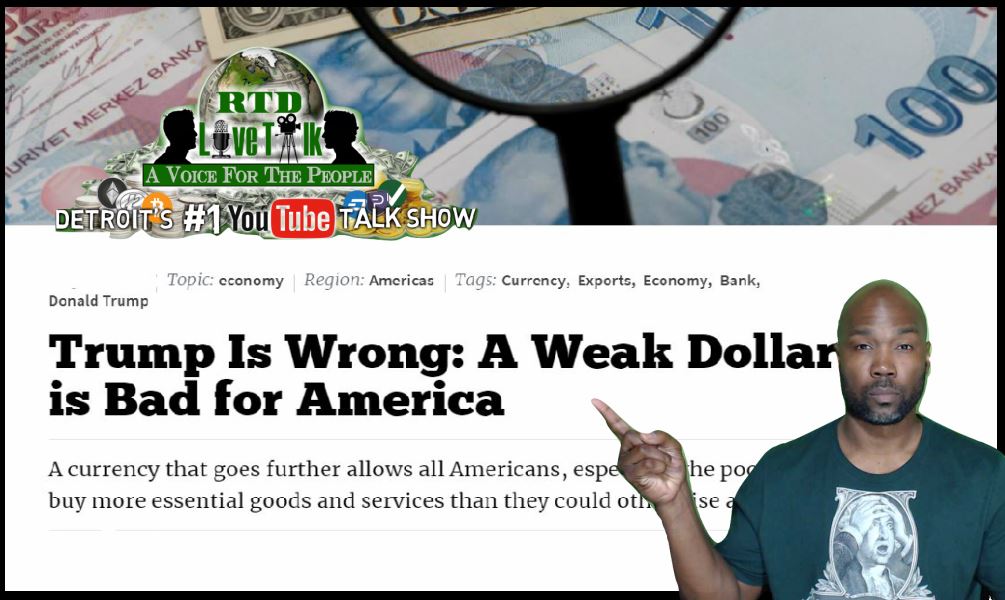 A currency that goes further allows all Americans, especially the poorest, to buy more essential goods and services than they could otherwise afford.

President Donald Trump tweeted the other day that Americans will be richer when U.S. dollars can buy fewer goods and services on world markets. The president didn’t phrase it quite that way, yet that would be the result of an intentionally depreciated dollar.

“China and Europe playing big currency manipulation game and pumping money into their system in order to compete with USA,” Trump wrote on Twitter, adding that the U.S. central bank should match them by depreciating America’s own currency in foreign exchange markets. This would require the U.S. government to create more dollars and then use them to buy up other currencies, making it easier and less expensive for foreigners to exchange their currencies for dollars.

The president’s demand is based on the faulty notion that a weaker exchange rate can confer a sustainable advantage in promoting exports, and that exporting more and importing less is the key to economic success. In practice, it should not be the aim of the U.S. government to pursue a weak or a strong dollar.

Currency exchange rates should be set freely in global markets according to the normal interplay of supply and demand. Floating exchange rates have served the world’s most advanced economies well for more than forty years, allowing trade flows to adjust to shifting economic fundamentals. For the record, the president’s own Treasury Department repeatedly declined to declare either China or the EU a currency manipulator in its semiannual reports.

For millions of working Americans, a policy of intentionally depreciating the U.S. dollar in global currency markets would make daily life more difficult. A weaker dollar would not only make foreign travel more expensive, but it would lead to higher prices for a range of tradable goods that loom large in family budgets—for essentials items such as shoes, clothing, furniture, cars, and fresh fruits and vegetables. This impacts the poorest among Americans, especially. Higher prices for those goods mean lower real wages for U.S. workers.

A weak dollar also means higher production costs for American producers. More than half of the goods Americans import are not for consumption but rather for production: raw materials, intermediate inputs, capital machinery. A declining dollar usually means a higher price for crucial inputs such as imported oil. If you think it’s good for U.S. industry to pay more for energy and for families to pay more for a tank of gas, you should love a weaker dollar.

Depreciating the dollar would negatively affect America’s “terms of trade” with the rest of the world. Terms of trade measure the price of U.S. exports divided by the price of U.S. imports. That determines, for example, how many pairs of shoes America can import from China for each ton of soybeans the United States send there. Advocates of a weaker dollar want people to believe, contrary to common school-yard sense, that Americans are somehow richer, that trade is “fairer,” if we can only buy twenty pairs of shoes from China instead of twenty-five for every ton of soybeans, we sell them.

An artificially depreciated dollar can spur exports in the short run, but the extra currency pumped into global markets to drive down the exchange rate can cause a bump in the general price level—i.e., inflation—which eventually cancels out any advantage from a drop in the nominal exchange rate. Ultimately, central bank actions have only a limited and fleeting impact on a currency’s real value.

Looking back on the past three decades of U.S. experience, using the Federal Reserve’s own “Real Trade Weighted U.S. Dollar Index” as a yardstick, there appears to be no significant difference in economic performance whether the dollar is weak or strong. In quarters where the dollar index was stronger than the 1990–2019 average, annualized GDP growth averaged 2.7 percent; in quarters where the dollar was weaker than average, growth was 2.3 percent. In the past four quarters under Trump, U.S. GDP growth has averaged a healthy 3.2 percent, while the dollar’s real value has been more than 6 percent above average.

More rigorous academic work looking at the effects of exchange rate depreciation on the U.S. economy, such as a 2018 study by Wei Sun and Gil Kim in the Journal of Economic Studies, confirms that currency depreciations can provide a short-term boost for output—but those effects are soon dissipated by rising inflation and declining consumption, with no long-term impact on the trade balance.

As a nation, America should neither engineer a weak dollar nor fear a strong one. The United States currency can be strong for lots of good reasons. When foreigners are not using American dollars to buy U.S. exports, they want them to invest in America—in U.S. treasury bonds, stocks, real estate, and in foreign-affiliate-owned factories across America. A strong dollar reflects not only its usefulness as a medium of global exchange, but the world’s confidence in America as a safe haven to invest its wealth.

When it comes to a weaker dollar, Trump should be careful what he wishes for.