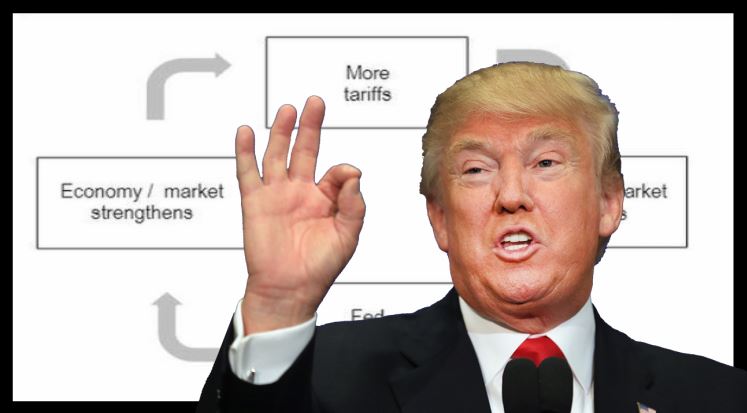 Trump’s “Phase One” deal left pretty much everyone disappointed: from experts who were expecting a realistic compromise between the two superpowers instead of the ludicrous and completely undoable Beijing promise to quadruple US agricultural purchases to $50 billion (a detailed explanation why this is impossible can be read in the following thread by the former USDA Chief Economist and USTR ag negotiator, Joe Glauber)…

… to media pundits, to Trump’s political enemies (Schumer said the president “sold out” in phase one deal), to Wall Street banks (Goldman said  “The Tariff Reduction Is Only Half What We Expected”).

Not unironically, the only party that appears to be happy with the outcome of the “Phase One” deal in addition to Trump of course, is China: as the Chinese foreign minister Wang Yi said on Saturday, the China-U.S. trade deal “ serves as bullish news for both countries and the rest of the world.”

Here alarms should be going off, because if indeed both Trump and China are happy with the deal outcome, by definition that means that the US is reverting back to the old “non zero-sum” world where US politicians catered to China in the context of a globalized world. In other words, Trump’s effort to keep China’s superpower ascent in check appears to have taken a back seat to the president’s desire to keep markets supporter and avoid the shock of a fresh re-escalation of the trade war.

But is that feasible?

Before, we answer that question, here is a recap of what the Trump admin announced on Friday as part of the “Phase One” trade deal:

The first complication is that while Trump explicitly agreed to roll back some tariffs, substantial ambiguity on agriculture: While both sides agreed on increased agricultural and other US commodity purchases by China, it’s unclear what level such purchases will reach and how this will be enforceable. Given the US’s focus on this issue, experts remain concerned (and confident) that disappointment on this point as negotiations continue would be a potential catalyst for re-escalation of tariffs.

Yet even assuming no major re-escalation in the context of Phase One, which is in the history books, what happens next?

Well, as Morgan Stanley’s policy strategist Michael Zezas writes, with the easy stuff, i.e., the generally hollow and/or impossible promises that make up the bulk of Phase 1, agreed upon, it is only the difficult stuff that has to be resolved, or as MS puts it, “key execution risks remain as the US/China relationship moves forward.“

Specifically, the end of Phase 1 and commencement of Phase 2 negotiations will materially strain goodwill: recall, “Phase 2” negotiations are, per the US, to commence immediately. And given that ‘Phase 1’ focused on the “easy” topics that were ‘low-hanging fruit’, Zezas warns that “Phase 2 negotiations could be more challenging, problematic, and potentially subject to stalls, as both sides debate the far more difficult issues of industrial policy.”

In other words, Trump may have taken what wasn’t broken, namely the tried and true strategy of ramping the market higher on daily speculation and “trade deal optimism”, i.e., leaks, rumors and innuendo that an easy to achieve Phase 1 deal was imminent, and “fixed it”, in the process replacing the easy Phase 1 outcome with the vastly more complex Phase 2 process, where an agreement between the two superpowers and a successful outcome is next to impossible.

Hence, Morgan Stanley argues the dynamic has shifted from ‘uncertain pause’ to ‘uncertain progress’, with the following key takeaways for investors:

In other words, as Morgan Stanley concludes, “given the execution risks going forward that we cited earlier and the lack of clarity on important details, we don’t yet have the conviction that this deal can be a catalyst to a meaningful uptick in business confidence.”

As for markets, the outcome could be even more dire for one simple reason: over the past year, the interminably recurring catalyst that pushed stocks ever higher, was “optimism” that a deal was imminent. Well the Phase One is “now in the books”, and not even the most gullible traders – or algos – will believe that a Phase 2 deal can be done before the elections, or frankly, ever. As such, the most important crutch behind the market climbing the trade war Wall of Worry for the past year is now gone.

Worse, by removing the risk of trade war, the Fed’s monetary policy will no longer be constrained on the downside by the risk of a potential trade war re-escalation. This is critical because as we explained in August, it was the Fed itself that was underwriting Trump’s trade war.

That said, there is a silver lining: the Fed’s “NOT QE” bailout of the repo market remains, and as long as Powell continues to inject hundreds of billions (just to stabilize a handful of banks and push markets higher), the risk of market bloodbath remains remote. However, if and when this process too begins to taper some time in Q2 2020, that may be the time to watch out below. Worst of all for Trump – this will take place just a few months before the November election. What he plans to do to full the void left by both “Trade Deal” optimism and “NOT QE4” remains unclear.