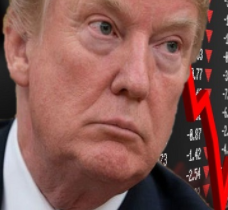 President Trump just had his best week, ever:

Meanwhile, half a freakin’ billion Chinese are on lockdown.

That is what they say.

The hardcore nature of the suppression of the alternative-media covering the Wuhan Coronavirus is quite telling.

The three main topics we discussed today all point to a US federal government set-up for failure in its response to the Wuhan Coronavirus.

Please consider watching and sharing today’s live-stream if you have not already.

I have an overall point here: Something’s not quite right.

Why does it matter?

Well, if there truly is a Deep State Coup against President Trump, then where do the Deep Staters go next in their mission to overthrow a “duly elected” President?

I mean, they had their Russiagate, and that “Witch Hunt” resulted in finding a big goose egg.

Then there was the impeachment, and to nobody’s surprise, there was this week’s acquittal.

So I’ll ask the question again, but in a different way: What comes next?

There’s even an argument that the election itself falls within the Fed’s purview. After all, Trump’s reelection arguably presents a threat to the U.S. and global economy, to the Fed’s independence and its ability to achieve its employment and inflation objectives. If the goal of monetary policy is to achieve the best long-term economic outcome, then Fed officials should consider how their decisions will affect the political outcome in 2020.

In other words, in the context of Dudley’s entire op-ed, it’s basically “crash the economy and blame Trump”.

Here’s the thing: Half of the country thinks President Trump is literally invincible, and the other half thinks he ruins everything.

And do we have anything that could really wreck the economy?

Well, we had Iran, but there’s too much risk in an era of smart-phones and high-speed connectivity of exposing a flase flag or false flag hoax, so the “when all else fails, they take us to war” playbook is really showing it’s age.

Naked, even to the smartphone eye!

So it’s quite possible that moving forward in an era of smartphones and high-speed connectivity, the new playbook is “when all else fails, they unleash a global pandemic”.

Whether it’s real, fake, hoaxed, or even an extinction-level event is moot.

Because the MSM controls the narrative, which is told by the American Deep State Globalists and non-American Globalists, and since we’re talking about what is an essentially invisible threat, we can rest assured that he sheeple will just take the MSM’s word for it.

So now, since war was so last century with spillover into this, the next century will likely be just as deadly, but it will be a whole different beast all together.

And a completely different type of fear.

Whose current name in early 2020 is Wuhan Coronavirus.

President Trump hopes the virus will literally be gone before Summer:

Just had a long and very good conversation by phone with President Xi of China. He is strong, sharp and powerfully focused on leading the counterattack on the Coronavirus. He feels they are doing very well, even building hospitals in a matter of only days. Nothing is easy, but…

….he will be successful, especially as the weather starts to warm & the virus hopefully becomes weaker, and then gone. Great discipline is taking place in China, as President Xi strongly leads what will be a very successful operation. We are working closely with China to help!

It’s more likely that all heck breaks loose before Spring.

And so gold remains bid:

They’re trying to make silver look like an industrial commodity:

First and foremost, however, silver is money, and silver will remain bid.

In the meantime, in their attempts to take silver behind the woodshed and lump it on top of the logs, those who understand the gold-to-silver ratio arbitrage have been given an excellent entry point:

Moving above 90 for several times in the last couple of weeks has been brought to you by the stacker-friendly reason of lower silver price as gold has basically maintained.

Palladium’s banging around, and it’s nice to see:

A little bit of volatility, choppiness and, hopefully, uncertainty about palladium’s direction, are all good things.

Well, I think all four precious metals will catch the “flight to safety” bid, so while some may be thinking the industrial demand for palladium is set to plummet as the global economy collapses, on the other hand, palladium will be in demand as money outside of the system, and that demand could more than offset demand lost to industry.

The same can be said about platinum:

Platinum investors have a nice dip-buying opportunity here, especially those who invest in the physical metal with possession “in-hand”.

Copper shows the plight of the commodities:

If that double-bottom doesn’t hold, there’s more evidence this Wuhan Coronavirus is super-serious.

And that’s regardless if it’s “naturally occurring” or “man-made”, escaped or otherwise unleashed.

Crude oil is treading water above $50:

It’s safe to say that demand for crude oil will fall, but the question of how much money is about to be printed remains?

Just wait until people are truly scared about the Wuhan Coronavirus, however:

People will yearn for the days of 24/7 market intervention, including the suppression of volatility.

If the reality of Wuhan Coronavirus starts to sink-in on those who don’t yet understand the severity of it, then yield should crash before the bond market does:

Which is just what they need to keep killing the savers.

At least they’ve made the US dollar index interesting:

Everybody is so sure there’s going to be a flight to safety into the US dollar, but I’m just not so sure.

What’s the bottom line as we find ourselves here this beautiful Friday in early February?

Then the Globalists have extracted the very last of America’s useful wealth.

Wuhan Coronavirus ensures America stays down for the count.

If I’m wrong, and it’s the Deep State against Trump?

Well, we are still set for economic collapse.

Get ready for the collapse.

And a sprinkle of fun!

As all else fails?