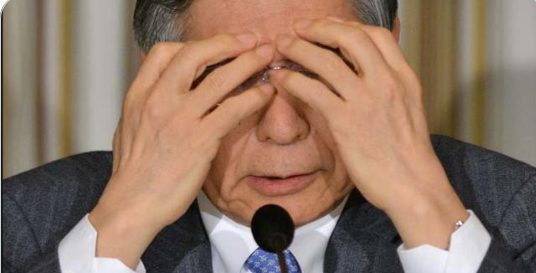 While most central banks are contemplating how to gently break it to the public that since they are out of ammo with interest rates at all time low, and $15 trillion in global sovereign debt is now yielding negative – a financial abortion which suggests the value of money is negative – the only hope markets have to avoid collapse is for central banks to start buying stocks in the open market, the BOJ has no such problems: after all the Japanese central bank (alongside its Swiss peer) has for years been quite open that it purchases stocks and ETFs directly. Unfortunately, in its efforts to stabilize the market, the BOJ has been purchasing a little too many ETFs and it now owns far too much.

Last May, speaking to Japanese parliamentarians, BOJ Governor Haruhiko Kuroda noted that the central bank now owns nealry 80% of the country’s stock of ETFs, the result of a program begun in 2010 and ramped up in 2013.

Unfortunately, the program failed in its immediate task: the main goal of ETF buying was to lower Japan’s equity-risk premium – the extra returns investors expect for buying stock rather than simply parking their money in riskless government debt. A lower premium should raise stock prices and make equity financing easier for listed companies. But at just shy of 7%, Japan’s premium remains stubbornly above the U.S.’s 6%—with the gap little changed in six years – according to Aswath Damodaran, professor of finance at New York University’s Stern School of Business.

Now what is truly terrifying is that the impact of the BOJ’s massive equity purchases is actually not easily visible in Japanese stock valuations as share prices have actually fallen as a multiple of earnings during the course of the program.

Meanwhile, unlike the trillions in bonds the BOJ owns as part of its QE program, the equity purchased by the central bank does not mature and is “owned” by the bank’s until it is sold.

And while the BOJ has a long way to go before crossing that particular bridge, in the meantime it has come across a major hurdle to its monetary operations: it now owns so many ETFs, it is effectively freezing up the market.

According to the Nikkei, in order to restore some functionality to the market where volumes have collapsed in recent years, the BOJ will soon start lending shares in exchange-traded funds to brokerages as early as next spring to try to restore some of the liquidity it has drained out of the market.

As the Nikkei explains, the central bank began considering ETF lending in April “as part of a plan to improve the sustainability of its asset-buying, which has distorted markets due to its sheer scale.”

With its ETF holdings of 28.9 trillion yen ($266 billion) as of March 31, which amount to nearly 80% of the entire ETF market, the BOJ is on track to surpass the world’s largest pension fund, the Government Pension Investment Fund, as the top holder of Tokyo-listed stocks as early as next year.

Why is the BOJ suddenly worried about adding market liquidity after draining it for years? For one reason, retail investors have largely abandoned the market as a result of the illiquid conditions; more importantly, by renting out ETFs to the market, the BOJ will make it easier for itself to conduct its own ETF purchases, as well as offset some of the costs through lending fees.

According to Eiji Dohke, an analyst at SBI Securities, brokerages could borrow ETFs from the BOJ and then short-sell them back to the bank, which however could be a problem and a major conflict of interest as the BOJ is interested in pushing asset prices higher.

In any event, market makers, such as brokerages and high-frequency traders, need to keep ETF inventory on hand to ensure that retail investors can readily buy and sell. But the risk of price fluctuations limits the amount they can hold at once, making it difficult to fulfill large buy orders; as such the BOJ’s purchases have in effect paralyzed the market. Being able to borrow from the BOJ as needed would let market makers cover such shortfalls.

Last April, BOJ head Haruhiko Kuroda told reporters that the goal of the lending program was to improve the functioning of the ETF market. Frequent ETF lending, mainly by pension funds, contributes to the abundant liquidity of the U.S. market. The proposal, which is still being finalized, has drawn criticism.

So how will the liquidity injection be implemented? In a market briefing, the BOJ said it planned to take bids for ETF lending once per month. This would require market makers to estimate demand a month in advance. Excess ETFs not sold to investors would return to the central bank, but market makers would still have to eat the cost of borrowing them.

“Being able to borrow from the BOJ whenever there’s demand and settle the transaction then would be ideal. Once a month is too little,” a market player said.

So for all those still wondering if the end of capital markets will come with a bang, or a whimper, Japan proudly lights the way: we are nearing a time when trades will only take place once a month, and only with the BOJ’s blessing, as the entire world succumbs to central planning that would make Josef Stalin green with envy.