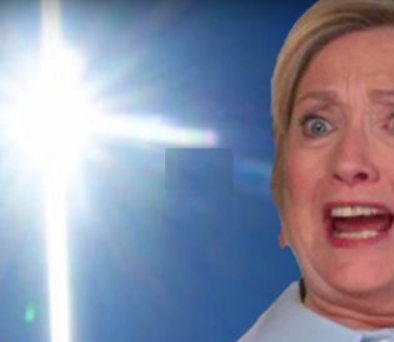 We have to wonder if Michael Bloomberg, one of the many Democrat candidates trying to obtain the party nomination for President, has a death wish. Because in the ultimate “Nightmare Scenario” for Democrats as a party, and for Bernie Bros (Bernie Sanders’ supporters), and for the country itself, if it is true and in any way had a chance to work, as we see a Drudge Exclusive stating that his sources close to the Bloomberg Campaign, says ‘Mini Mike,’ as President Trump has dubbed him,  is considering bringing on twice-failed Presidential candidate Hillary Clinton as his running mate.

When the news broke on Saturday, February 15th, Stefan Stanford left the following note in the comment section: “One could read this new Drudge headline as: Michael Bloomberg’s life expectancy just got a lot shorter with Hillary and the ‘Clinton body count’ potentially just steps away from the presidency”…… – Stefan Stanford, February 15, 2020

It is hard to decide where to begin since there are so many different angles, and this is a nightmare scenario for a variety of people, none of which is President Donald Trump, or his supporters, who are finding the freakfest over this news, quite entertaining.

According to the New York Post, the reason Bloomberg is floating the idea of putting Clinton on his ticket is because his polling shows that a Bloomberg/Clinton ticket “would be a formidable force.”

Bernie Bros are furious and it is still just a rumor from a source supposedly close to the Bloomberg campaign. Sanders’ supporters were already angered by Bloomberg’s entry and the DNC changing their rules to allow him treatment the other candidates did not get. Now throw Hillary Clinton into the mix, after the DNC rigged the primaries against Sanders in favor of Clinton in 2016, and you have a large group of Democrat voters that consider themselves “BernieOrBust.” In other words they won’t vote, or will vote Republican or possibly write in a candidate but will never vote for another candidate when they think Sanders was screwed again by the DNC.

(ANP FUNDRAISER! Due to recent medical expenses, All News Pipeline will need financial help in the months ahead. If you like stories like this, please consider donating to ANP to help keep us in this ‘Info-war’ for America at a time of systematic censorship and corruption.)

Moderate Democrats are busy throwing cold water on the very idea of such a thing.  Other liberals are calling this a way to “change the subject,”  from the new Washington Post story about Bloomberg’s history of sexism.

Clinton supporters aren’t exactly thrilled either, taking this as an insult because to them “If she launched her own campaign today she’d be polling higher than half the field, including Bloomberg.”

I admit, I laughed out loud at reading that reaction. I mean come on…. Clinton has failed in her bid to become president not once, but twice. Once to little known Senator, Barack Obama, and the second time she actually did manage to get nominated, (by cheating!) as the Democrat nominee, and lost to a millionaire businessman that had never held a political office.

If Drudge is correct and Bloomberg is considering Clinton as a running mate, then the Democrat Party’s terror of Bernie Sanders actually taking the nomination has intensified greatly. Remember it wasn’t long ago that Democrats were telling reporters they wish Clinton would shut up and go away, yet now they would support a Bloomberg/Clinton ticket?