The Slowdown In The Auto Industry Is Tanking The Global Economy 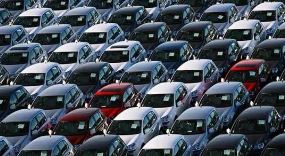 The global economy continues to grind to a halt and the culprit has never been clearer: the auto industry.

For the better part of almost 2 years now, we have been reporting monthly on marked slowdowns in key auto markets like China, North America and Europe. Now, the slowdown in this massive industry is what’s helping spur an overall global economic slowdown, according to FT.

The reaches of the auto market go deep, with long supply chains and large consumption of raw materials, textiles, chemicals and electronics. The industry is home to millions of jobs and last year, the sector shrank for the first time since the global financial crisis. The IMF is estimating that this fall in output accounted for more than 25% of the slowdown in the global economy between 2017 and 2018.

The sector may also be responsible for up to 33% of the slowdown in global trade growth over the same period, the IMF said.

“The car sector has been weighing heavily on manufacturing activity and growth.”

And the fund’s forecast of a small lift in global trade in 2020 is dependent on a recovery in the auto sector. Conversely, the fund’s analysis also notes the potential further damage that could occur if the auto sector becomes the focus of the ongoing U.S./China trade war.

The White House is slated to make a decision on auto import tariffs by November 13.

U.S. trade policy is already being blamed for much of the sector’s misfortune, specifically as it relates to China’s auto industry.

“This trade war is really influencing the mood of the customers, and it has the chance to really disrupt the world economy. Because of the trade war, the car market [in China] is basically in a recession . . . That’s scary for us.”

The IMF says that slowing in the industry is also due to policy changes in China, including the withdrawal of tax breaks encouraging car ownership and a slowdown in peer to peer lending. New emission standards in Europe have also been blamed for the slowdown in the industry.

The IMF also said that consumers in many countries were holding off on purchases due to standards changing rapidly. At the same time, car sharing programs have evolved and become more ubiquitous.

Car sales in India have also slumped, mainly as a result of problems in the shadow banking sector that provides “about half” of new car financing. At the same time, Turkey has faced recession and the UK has been struggling with the onset of Brexit.

Overall car sales fell 3% in 2018 and production fell by about 2.4%, the IMF said. This drop off in car sales could have reduced world GDP by “as much as 0.2%” according to Fitch – a number that is significantly more than IMF estimates. Fitch took into account spillovers to other industries and the effects of lower wages and profits on household and business spending.

“This is where the global slowdown has been concentrated. It has been the lead sector, not just broader collateral damage [of the trade war] . . . There is no doubt this is a key driver of the global manufacturing cycle.”

If tariffs begin to escalate in the industry, the outlook could become even more grim. US Commerce Secretary Wilbur Ross has alluded that he is more inclined to work strategically with the EU regarding trade instead of getting into a tit-for-tat tariff situation. A six month reprieve of tariffs with the EU is set to expire during the middle of this month.

Analysis found that if the U.S. were to act on the threat of 25% tariffs on auto imports from all countries, U.S. auto production could fall by 1.5% and the sector could shed 2% of its total workforce. 195,000 workers would be estimated to lose their jobs. In an event where other countries retaliate, U.S. production could fall as much as 3% and put 624,000 jobs at risk. 5% of the sector’s workforce would be under threat of being displaced.

“If they do this, we are all losers,” Oliver Zipse, BMW’s chief executive said last month.

Holger Schmieding, an economist at Berenberg, noted that this uncertainty often causes consumers to hold off from big ticket purchases: “If you are uncertain . . . you don’t have to buy the car.”