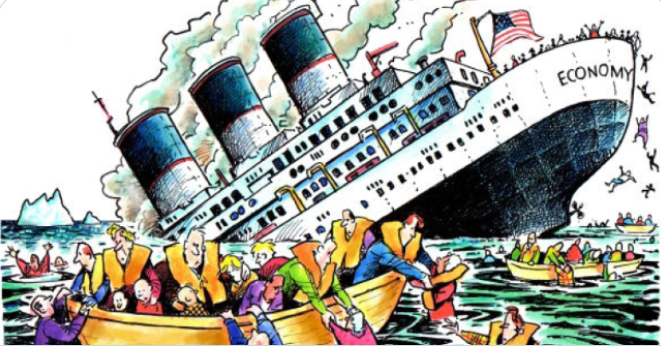 The greater fools still partying in the first-class lounge are in denial that even the greatest, most technologically advanced ship can sink.

On April 14, 1912, the liner Titanic, considered unsinkable due to its watertight compartments and other features, struck a glancing blow against a massive iceberg on that moonless, weirdly calm night.

In the early hours of April 15, the great ship broke in half and sank, ending the lives of the majority of its passengers and crew.The usual analogy drawn between the Titanic and our financial meltdown stems from the initial complacency of the passengers after the collision.

Some passengers went on deck to play with the ice scraped off the berg, while most returned to the festivities still working their magic as midnight approached.

The class structure of Edwardian Britain soon came into play, however; as the situation grew visibly threatening, the First Class passengers were herded into the few lifeboats while the steerage/Third Class passengers–many of them immigrants–were mostly kept below decks, sealing their doom.

But there are even more compelling analogies than initial complacency turning to panic. Consider this diagram of the great ship:

The large black rectangles on the lower deck represent the coal bunkers; they were located adjacent to the boilers which powered the engines. Though the ship only scraped against the iceberg, as Titanic explorer Robert Ballard explains, that was enough to pop rivets and open hull plates:

The glancing blow that ruptured the Titanic’s hull over a distance of roughly 250 feet (out of a full length of 882 feet) and admitted water into six of her compartments sealed her fate.Considerable hullabaloo attended the attempt in the summer of 1996 to raise a piece of the hull from the debris field, but far more interesting was the ultrasound investigation of the area of the bow damaged by the iceberg. These images revealed six small tears or openings affecting the first six compartments. Just as we had surmised in 1986, the great gash was a myth and the actual openings into the ship seem to have been the result of rivets popping and hull plates separating.

This offers a very powerful analogy to the fatal damage inflicted on our financial system by an apparently “glancing blow” with the pandemic shutdown.

Just as the Titanic was mortally wounded not by great tears in its hull but by the buckling of steel hull plates, so the U.S. (and thus global) financial system is sinking from similarly “glancing” blows.The actual damage could have been contained–do you sense another analogy about to surface?– had the fifth watertight bulwark–shall we call it “the bulwark against systemic failure”?– extended a few decks higher. But inexplicably, this watertight barrier did not extend as high as the other watertight bulkheads.

Though the water gushing through a three-foot gash in the forward engine room was held back by the ship’s great pumps, as the bow sank lower then water seeped over the fifth watertight bulkhead and gushed into the boiler room, extinguishing the fires that powered the pumps.This generated a feedback loop: the higher the water rose, the more boilers were extinguished and the less power was available to the pumps.

And so against all “rational odds,” the ship’s apparently minor structural design flaw led to its inevitable loss as the mighty pumps lost their battle against the rising water.To all the “experts,” the risk of collision with an iceberg were considered low, while the risk of catastrophic damage were considered essentially zero. Hmm, does that remind you of our financial system circa September 2019, just as the great U.S. economy’s hull was buckling?

Now we have the Great Pumps of Federal Reserve money-printing and Stimulus, which in a close analogy are pumping trillions of dollars into the sinking U.S. economy. But just as the engines of the Titanic lost power as the water extinguished the boilers supplying steam to the engines, so the stimulus is only keeping the rising water temporarily at bay– it is not actually saving the “engines” of the economy from sputtering.And what are those engines?

1. Debt, which must increase to fuel spending, income and thus taxes

2. Rising assets, which provide the basis for ever-more borrowing

3. Government borrowing, which enables government spending to keep rising without regard to actual tax revenues or the health of those being taxed

The ice-cold water is splashing into each of these engines. As assets fall then there is simply no foundation (collateral) to support more borrowing. As debt is paid down rather than expanded, then spending falls. As spending falls, so do revenues, profits and employment, all of which crimp tax revenues.

The last engine is government borrowing. To those still standing on the sloping deck, cheering the “good news” of Big Tech’s meteoric ascent to the heavens of bubble overvaluation, this seems like the engine which can never be extinguished. Through thick and thin the Federal government and the state and local governments (via muni bonds) have been able to borrow and spend stupendous sums seemingly without consequence.

The demise of this last great engine will surprise as many as the sinking of the Titanic did, but it is as inevitable as the sinking of the great ship. The pumps can only hold the water back for a while, but the Stimulus magic will expire sooner than anyone imagines.As the government scrambles to find buyers for endless trillions in new U.S. bonds (and trillions more in new corporate debt, new mortgages, new consumer debt, student loans, new muni debt, etc.) then interest rates will rise and the great engine of ever-greater debt will hiss and sigh as the water rises and then go silent and cold.

The first-class passengers have already been ushered to their lifeboats. They’ve sold to the euphoric passengers buying Big Tech’s parabolic ascent and the greater fools still partying in the first-class lounge who are in denial that even the greatest, most technologically advanced ship can sink, taking everyone in denial down with it.The sinking is not a possibility, it is an inevitability.