The Silver Shorts Are Up Against The Trade! 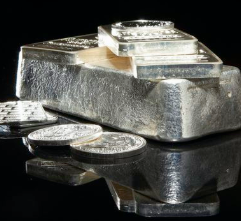 Silver is aiming at the opposite direction, trading in the green with the March contract at $17.77 up 3.6 cents with its high at $17.865 and the low at $17.670. Even our Dollar is in holiday trade mode with the trade held at 99.035, up 3.2 points and close to the high at 99.045 with the low at 98.935. Of course all of this happened already, before 5 am pst, the Comex open, the London close, and after Bloomberg suggested Hillary as a VP runner on the Democratic ticket, which was immediately met with State Farm Cancels Bloomberg’s Life Insurance After Hillary’s VP Announcement. PS, before you send in your rhetorical emails, read the whole thing.

February Silver’s Delivery Demands have not budged since last Thursday with the Open Interest still stuck at 1 and with zero Volume once again up on the board. The Overall Open Interest, however, jumped by 5,406 controlling contracts, proving the shorts are up against the trade bringing the total to 231,131 Overnighters during Friday’s 11+ cent rally. This proves to us the idea of how stuck the shorts are with the count only 13,065 contracts away from making a new all-time paper high. As long as the price is used as a measure and not the papers behind it, people who watch the financial news services will believe things are static, while we (and the DOJ?) watch the movements behind the price.

February Gold’s Delivery Demands is doing just the opposite of Silver’s with the Demand Count now at 699 fully paid for contracts, proving a reduction of 27 receipts from Friday’s quote and with a Volume of 10 posted up on the board with a trading range between $1,580.00 and $1,579.80, with the last trade at the high. As a side note here, February Deliveries for Gold is a primary delivery month, unlike Silver (March is Ag’s pdm). Gold’s Overall Open Interest gained 13,657 more short contracts on Friday’s gains proving the Overall Count to be at 687,921 Obligations, bringing the score closer to making another HSBC all time “paper contract” high once it passes 798,541 Overnighters.

It seems Hong Kong is having a “Just In Time” supply issue as basic needs are becoming harder and harder to find with one instance showing a truckload of toilet paper being stolen right off the truck. The entire JIT system is proving to be an issue, and now for all nations, because China is pretty much in a complete shutdown with over 80 cities locked up one way or another. Yesterday’s NYP pointed out a very scary issue with the Diamond Princess cruise ship infection count reaching up to 355 souls. So, from last Monday’s Petri dish thesis to now, the count increased by 220 (above the starting point at 135), more than doubling the count in under a weeks’ time. We feel that this Wednesday release date given by the Japan’s authorities, will be extended, maybe up to and beyond the 24 days China has imposed. Now we see a Supposed 760 million (+/-) people in China are under some type of restriction, and with no real trustworthy data coming from the nation as their system of population control, may prove to be under a complete change, that is if they don’t start immediately saving the lives of their minions.

We have prepared by becoming our very own warehouse since JIT is failing. We have accumulated over 6 months of foods that we eat normally, in addition all types of hygiene products, along with an additional “bleach in a spray bottle” to squirt down any incoming packages coming from anywhere, and the medicines we need to sit tight for up to a year. Also of note, inside our own personal petri dish, we have not received any of our purchases from China in over 1-1/2 months, that won’t bother us too much since it’s only fishing equipment. I even asked our mail carrier if she knew if packages from China were being shuttered. She said her orders haven’t even shown up either, and it seemed to me she was not telling me all she knew too (they must have discussed this at higher levels). We hope there is a solution, yet we feel it best to be overprepared.

Keep the attitudes positive, because it really does keep sickness away. Have a smile on your face for all you see, and a prayer in the heart for those infected. Now is not the time to blame, now is the time to prepare and to stay away from traveling and the crowds, until we’re given the “All Clear”. Enjoy President’s Day, and as always …