The Return of Hyperinflation in Zimbabwe 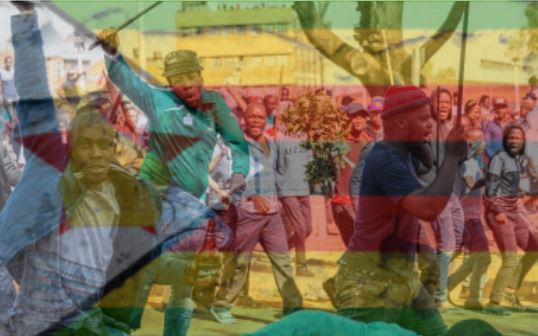 It has been over a decade since Zimbabwe was ravished by one of history’s worst experiences in hyperinflation, reaching 79,600,000,000 percent as prices doubled approximately every 24.7 hours in November of 2008. Today under new leadership, it seems as though the government of Zimbabwe has failed to learn from its previous mistakes in what policy to ascribe to as it enters into another period of tumultuous times and economic hardship for its citizens as hyperinflation has entered the picture again.

Zimbabwe’s horrendous experience with hyperinflation came from monetizing its expenses as a result of several years of failed political reforms such as confiscation of agricultural properties and price controls. This resulted in GDP declining -17 percent  in 2008 (see Figure 1). With Zimbabwe’s practice of printing money, the government decided in 2009 to abandon their local currency and replaced it with foreign currency such as the US dollar and African Rand, which helped provide more stabilization.

However, after its rapid expansion from 2009 to 2012, Zimbabwe’s economy began to slow down significantly in 2013 as they were met in the beginning of the year with the government having a minuscule balance of $217 in its public account. The same year Robert Mugabe, representing the ZANU-PF party, was reelected in the general election with the promise of continuing indigenization policies. The indigenization policies would attempt to create greater equality and economic growth by violating property rights and requiring foreign or white-owned companies to give a majority portion of their ownership to indigenous blacks. In doing so, Mugabe’s policy sent uncertainty within the market as it discouraged future foreign investment with the threat of asset confiscation, creating a lack of capital to expand production.

In addition, thanks to continued regime uncertainty, and with no monetary policy of its own, by 2014 Zimbabwe began to experience a shortage of physical cash which had reportedly led some people to use candied sweets and condoms in replace of change. Combined with this challenge, Zimbabwe had a poor harvest as it faced a drought in 2016 affecting five million people causing it to run a USD 1.4 billion deficit that made up 10 percent of national output causing an even further shortage of cash.

On November 21, 2017, after 37 years of ruling Zimbabwe with an iron fist, Mugabe resigned amidst political pressure of impeachment through a military coup. By the end of that week on the 24th, Emmerson Mnangagwa had become the new president of Zimbabwe. Immediately following Mnangagwa’s ascension to power, the president assured the population of drastic policy changes to help stabilize and boost economic growth.

In the start of 2019, Zimbabwe’s highly-regulated economy began to experience a shortage of fuel. To curb the demand, and as an attempt to keep fuel supplies within the country, Mnangagwa decided to use the state-managed energy sector to raise diesel by 125 percent and petrol by 131 percent overnight. Such a drastic increase immediately led to a three-day protest leaving 12 people dead and 78 treated for gunshot wounds as a result.

In Zimbabwe, the increase in the price of fuel has caused transportation costs to soar, which resulted in detrimental effects for businesses as their costs rose. In order to compensate for the increased cost in fuel, entrepreneurs must offset that by either lowering profit margins or raising prices. In an interconnected economy where entrepreneurs rely on each other to supply goods and services to each other and utilize those goods and services for future production when one entrepreneur increases their prices, this begins to cause other entrepreneurs to raise their prices in order to maintain profitability.

By June of this year, worsened by a variety of factors from fuel prices to declining domestic output, ZIMSTATS (Zimbabwe National Statistics Agency) reported that inflation in Zimbabwe had reached 175.66 percent%. In an effort to to combat this hyperinflation, Zimbabwe’s finance minister Mthuli Ncube then declared that the use of foreign currency will be forbidden in domestic transactions and that its civilians can only use electronic Real Time Gross Settlement Dollars (RTGS) to combat the shortage of US dollars. If a citizen decides to withdrawal the RTGS from their local bank, then they will receive paper bond notes in the denominations of $2, $5, $10, and $20.

Adopting the RTGS as a single unit of exchange is a rapid change from the not too long ago hyperinflation blunder. After 2009, the Zimbabwean state had stabilized its monetary affairs by using nine different currencies as legal tender. Now, the act of abolishing the use of foreign currency will only invoke the practice of off-the-grid transactions through the black market if businesses lose confidence in the RTGS. Confidence in the RTGS has already taken a hit as the black market ratio for RTGS to USD has reached 11 to 1 compared to the governments set ratio at 6.2 to 1. The difference in exchange ratios has shown that Zimbabwe cannot be trusted by issuing its currency as people have yet to build that confidence since it’s debacle in 2008.

Furthermore, Zimbabwe has suffered a drought this year and is estimated to have its corn crop drop by 54 percent, which would result in the necessity to import corn to make up for the shortage. However, importing goods is challenging, considering the country has been short of US dollars for the past few years. In the same period, Zimbabwe has also undergone continuous power outages due to the drought, lasting up to 18 hours per day and costing manufacturers over $200 million in lost production. To make matters worse President Mnangagwa in August raised fuel for the seventh time up over 500 percent.

Since the inflation report, Zimbabwe’s finance minister Mthuli Ncube said that inflation figures would be postponed until February 2020. The reason for the delay is so that government officials will have more time and information to accurately determine what the inflation rate is as the present prices are not measured in US dollars. However, many citizens have objected to this postponement with the belief that the government is attempting to hide the real inflation rate while the black market inflation rate in Zimbabwe is estimated to be at 558 percent.

When government intervenes within the market by setting the price of a commodity outside of the natural market forces of supply and demand while enforcing legal-tender laws to require its citizens to make transactions in a currency they do not trust, such actions will inevitably lead to hyperinflation such as the situation in Zimbabwe. As we reflect upon the present crisis and monitor the situation until the next inflation statistics come out in 2020, the conditions look gloomy going forward unless Zimbabwe changes its direction toward more free-market-oriented policies and avoids continued government intervention that impoverishes the standard of living of its people.