The Privatization Of Global Chaos 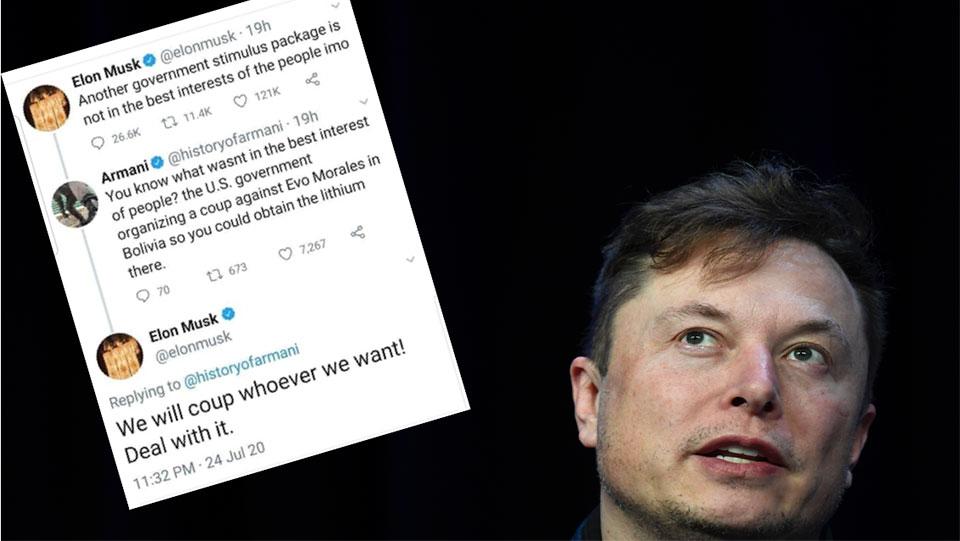 A recent off-hand remark by one of America’s oligarchs points toward a new methodology for undermining what is left of international law and order.

Speaking in earnest or in jest, nobody really knows, but smart money would certainly bet on the former, when admonished that the Bolivian coup that toppled President Evo Morales last year “wasn’t in the best interests of the Bolivian people,” Elon Musk, the Tesla electric car magnate, brazenly tweeted: “We will coup whoever we want. Deal with it!”

There is, of course, room for plausible deniability here because Musk was responding to another tweet calling the U.S. government, not Musk directly, to account for “organizing a coup against Evo Morales in Bolivia so you could obtain the lithium there.”

Musk’s “we” response could theoretically be interpreted as not a personal confession of responsibility for the dastardly deed but, rather, a good citizen’s loyal expression of support for his country’s foreign policy. Charitably speaking such a reading is possible. But speaking more realistically Musk, although associated in the public mind with a pioneering electric car design, did in fact have a very vital interest in the Bolivian regime change operation. Electric cars, to put it very simply, run on lithium batteries, and Bolivia just happens to be a major supplier of that ore. No lithium, no Tesla or any other electric vehicles.

To fill in some more blanks, it also happens that just weeks before the coup in November of 2019, President Morales issued a decree essentially nationalizing Bolivia’s mineral wealth, including lithium deposits. Bolivia watchers, of course, could see it coming for some time. The politically artless President disclosed his audacious game-plan to empower the Bolivian people to enjoy the benefits of their country’s wealth two years before.

Just read and weep at his naiveté:

“Bolivian President Evo Morales sees a prosperous future for his currently impoverished South American nation, pinning his hopes on the rapid rise in the global price of this valuable resource. ‘We will develop a huge lithium industry, over $800 million have already been made available,’ Morales told the German DPA news agency.”

So the jackals were put on notice as early as 2017. Morales’ “sins” were numerous enough and he would have been targeted for removal anyway even if he had not antagonized the lithium cartel by announcing the ambitious project to extract a fair price from it. But now we have at least established that Elon Musk and his local agents “highly likely” were not neutral observers while preparations for the coup were being conducted. Musk may have made his “we can coup whoever we want” remark as a loyal citizen who supports his country’s hemispheric interests, but clearly he also had significant financial interests of his own in this controversy.

Indeed, the contest between the individual by the name of Elon Musk and the country of Bolivia was anything but the “level playing field” that noble U.S. diplomacy insisted on in Bosnia while their local team was losing. Musk’s personal worth of $68 billion contrasts rather conspicuously with Bolivia’s GNP of $40.58 billion in 2019. Quite simply, the American oligarch could buy Bolivia and have plenty of change left over. But why buy it if you can far more cheaply organize a coup, put your people in charge, and then own it, including the lithium? That is a much more sensible business plan.

President Morales’ cheeky pipe-dream of “Bolivia’s enormous reserves provid[ing] a major windfall for the country, allowing it to generate wealth and spread prosperity among its destitute population” was clearly a non-starter in some influential circles and last year’s fascist coup at least temporarily put an end to it.

The genuine possibility that a very rich man with a huge pecuniary interest had concentrated his resources to overthrow the legitimate government of a member-state of the United Nations and got away with it, even boasting retrospectively of his accomplishment, should be shocking. The levity with which Musk’s revealing remark was met fully reflects the decay of the international legal system. Or, to be more precise, it shows the seemingly complete evaporation of what Ivan Ilyin called “legal consciousness,” embodying the fundamental norms that limit sociopathic and predatory behaviour at all levels, between states and between individuals, as well as between enormously powerful individuals and comparatively weak states, as in the Bolivian example that we are citing.

The Bolivian example, however, is far from isolated. The purposeful substitution in the conduct of foreign policy of private individuals for government personnel goes back at least to the Croatian Operation Storm in August of 1995. That was managed from the shadows by MPRI (Military Professional Resources Inc.), ostensibly a Washington-based private association of retired military officers renting their experience and expertise (including doctrinal advice, scenario planning and U.S. government satellite intelligence) to NATO strategic allies in distress. The 1995 MPRI arranged Croatian military assault, orchestrated with full Pentagon and White House plausible deniability, resulted in thousands of Serb civilian casualties and the expulsion of 250,000 Serb inhabitants from the UN protected Krajina region.

For a more recent illustration of the same principle at work, look no further than the May 2020 privately subcontracted invasion of Venezuela, with the goal of physically seizing its leadership and replacing it with pliant puppets clustered around the self-proclaimed “President” Juan Guaido.

Are we looking at a trend, or a “new normal”, to borrow a phrase from the current pandemic vocabulary, in the domain of international relations? It would appear so. The trailblazers of this new dispensation are wealthy oligarchs with lethal political agendas that go far beyond activities arguably excusable for members of their class, such as amassing more wealth. Coming immediately to mind are Soros (color revolution) and Gates (global imposition of unsafe vaccines and population reduction). Has admitted participation in the Bolivian coup now outed another “philanthropist,” Elon Musk, whose benefactions we must in future also suffer and dread?

Authored by Stephen Karganovic via The Strategic Culture Foundation,