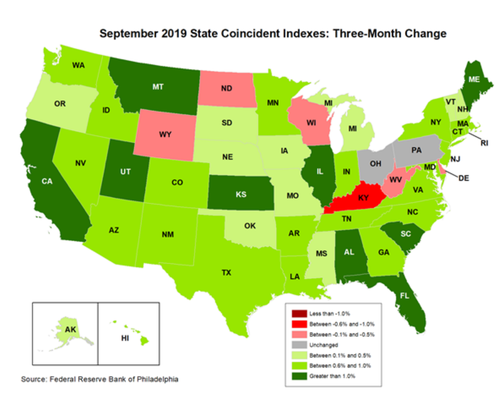 Over the course of 2019 we have been tracking three states – Michigan, Ohio and Indiana – because we believe the next US recession will start in the American upper-Midwest. Our thesis in a nutshell:

The latest state-level unemployment data (through October) is just out, and here is how it looks for MI, OH and IN, plus Pennsylvania (more on that one in a minute) from 2015 – present:

Here’s what we see in the data:

We can also use the “Sahm Recession Indicator” to evaluate this data. This rule, created by Fed economist Claudia Sahm, posits that a 0.5-point increase in unemployment over a year means a recession is coming. By that measure, Michigan, Ohio and Indiana are in the clear. Pennsylvania, however, is in some trouble.

As a second data point on this topic, consider the Philadelphia Fed’s State Coincident Indexes. These use a combination of unemployment and wage data to measure the 3-month change in a state’s economic health.

Here is the current 50-state map of that data, coded by shades of green (growing economies), grey (flat) and red (shrinking economies):

Submitted by Nick Colas of DataTrek