The Next Recession Will Be Uneven, Some Metros Will Be Hit Harder Than Others 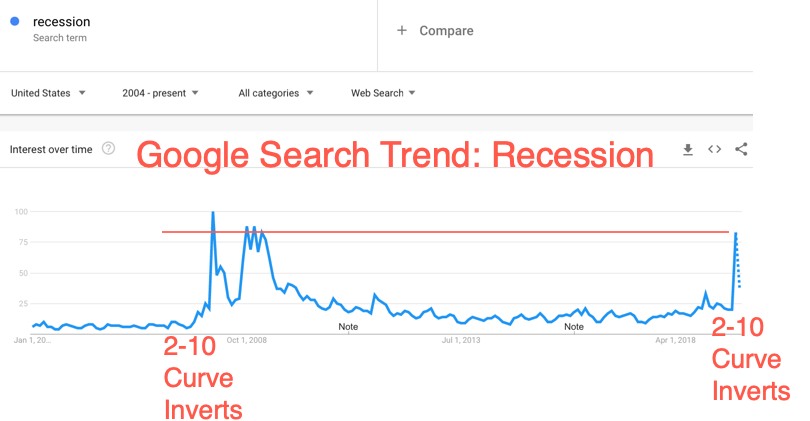 JPM’s recession indicator has hit the highest levels not seen in a decade. The next downturn in the economy could come as soon as 2H20, which has Redfin warning that housing markets in some parts of the country are going to be more at-risk than others.

Redfin says Riverside, Phoenix, and Miami have the highest risk of a housing correction when the next recession strikes, while Rochester, Buffalo, and Hartford have the lowest chance of a substantial correction in prices.

The economic narrative of a recession flourished last month when the 2-10 curve inverted, then became a household topic in the last several weeks with another inversion. Americans haven’t heard the word recession in nearly a decade, and many still have fresh memories of 2008.

And it appears the first domino has already fallen, Seattle-area home prices in May recorded -1.2% YoY, the first negative change in a major US city in this cycle.

A recession is likely, but when the window of vulnerability opens up, the shock won’t be the same as a decade ago, there will be different triggers.

Daryl Fairweather, the Redfin chief economist, said “Home prices are high right now, but they’re high because there’s not enough supply to meet demand, which means there’s not a bubble at-risk of bursting. Most of today’s financed homeowners have excellent credit and a cushion of home equity, making them unlikely to default on their mortgage even if their weekly grocery bill grows or their stock portfolio shrinks in the next recession.”

Fairweather continued, “If the U.S. enters a recession in the next two years, it will likely be caused by the global trade war. U.S. industries that rely on exports, like the automotive industry and the agricultural industry, would be the most vulnerable and susceptible to layoffs. Homeowners who are laid off may not be able to continue covering their monthly mortgage payment and may be forced to sell their homes. And would-be homebuyers won’t feel so confident about making a big purchase when they don’t feel confident about their job security or their financial wellbeing. That could cause declines in home prices in markets whose economy depends on global trade, but home prices nationwide are likely to hold steady.”

Redfin has created a map of the most at-risk housing markets across the country.

The real estate firm identified Riverside, California, with a score of 72% at-risk chance, followed by Phoenix (69.8%) and Miami (69.5%). Other at-risk metro areas are in Southern California, the Southwest, and Florida. These are areas where housing prices are overly inflated and aren’t sustainable

The housing market that isn’t likely to implode in the next recession is Rochester, New York, with a score of 30.4%, followed by Buffalo (31.9%) and Hartford, Connecticut (33.9%). Other areas that could weather the upcoming housing bust are clustered in the Northeast and the Midwest. There are several factors of why these areas won’t implode, one being that hot money over the last decade didn’t bid prices sky-high – still, most prices hover around the national median home price average of $250 to $300k.

And with that being said, it’s still not too late to call your broker if you own in an at-risk metro – it could be the best financial decision you’ve ever made ahead of the next downturn.