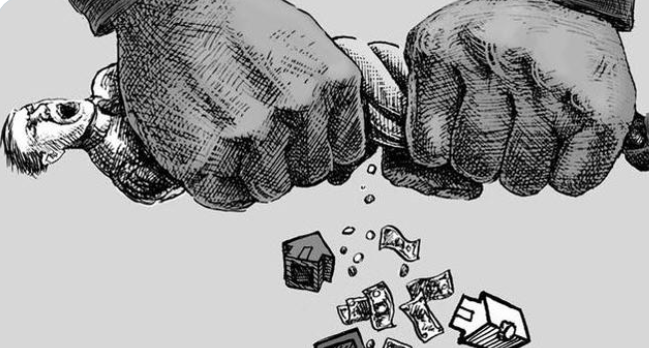 The net result is the muddle class has the signifiers but not the wealth, power, capital or agency that once defined the middle class.

The first use of the phrase The Muddle Class appears to be The rise of the muddle classes (Becky Pugh, telegraph.co.uk) in January 2007. The “muddle” described the complex nature of defining “the middle class,” which includes education, class origins, accents, and many other financial, social and cultural signifiers.

Comedian Jason Manford claimed to have coined the term in June 2013: “I’ve invented a new term; ‘Muddle Class’. When you find yourself being working class AND middle class at the same time.”

I’m using the term to describe the economic class that has the social signifiers of middle class status but little to no ownership of meaningful capital or control of their own financial security. In other words, this class “muddles through” the erosion of their purchasing power and economic security, claiming the social status of “middle class” while their financial status is impoverished when compared to the security of previous generations of “middle class.”

Social status signifiers include: college diplomas, advanced degrees, overseas travel, aspirational dining and consumer goods, home ownership, etc. But where previous generations were building meaningful capital and assets that could be passed down to their offspring, the assets of the “muddle class” are either negligible or highly contingent on the speculative bubble du jour (stocks, bonds, housing).

The more meaningful economic metrics for middle class status are:

1. Household indebtedness, i.e. how much of the income is devoted to debt service, and

2. How much of the household spending is funded by debt.

3. The ability of the household to set aside substantial savings / capital investment.

4. The security of the households’ employment.

5. The dependence of the household wealth on speculative asset bubbles inflated by central bank policies.

6. The percentage of the household income that is unearned, i.e. derived not from labor but from productive assets.

If all the household income is earned and there is no accumulation of income from capital (assets), then this is the definition of the working class.

7. The exposure of the households’ employment to automation, AI or offshoring.

8. How much of the household income is government transfers: benefits, subsidies, etc.

The muddle class is losing ground not just in financial security and agency (control of capital), but in intangible capital, a topic I explore in my new book Will You Be Richer or Poorer? Profit, Power and A.I. in a Traumatized World: the intangible capital of social mobility, positive social roles, employment stability, political power and a host of other forms of capital that define “middle class” as much as a college diploma or home ownership.

The middle class has been transformed into the muddle class by a number of forces:

1. Neoliberal globalization and ideology has eroded employment security by offloading risk onto workers while fragmenting the family structure via turning everything into a global market.

3. The destruction of interest earned on savings and the rise of central-bank fueled speculation has forced households to either lose ground by holding cash or gamble in the rigged casino of global markets–a gamble most will lose by design.

4. The ceaseless rise of non-discretionary costs has eroded the purchasing power of wages, while the winner take most speculative economy has reduced labor’s share of the economy (see chart below).

The net result is the muddle class has the signifiers but not the wealth, power, capital or agency that once defined the middle class. Signifiers may have social value, but not the sort of financial value that can be handed down or converted into tangible capital.