The Limits of Force: A Bayonet in the Back Will Not Restore China’s Economy 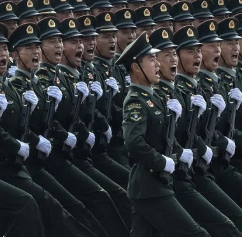 Force cannot restore legitimacy, trust or confidence, nor can it magically erase the consequences of a still-unfolding national trauma.

The Chinese authorities threatening to punish workers who refuse to return to work are getting a lesson in the limits of force in an unprecedented national trauma: a bayonet in the back will not restore the legitimacy and confidence that have been lost.

There are two enormous blind spots in conventional media coverage of the pandemic:

1. The limits of force in restoring China’s economy to pre-pandemic levels.

2. The longer term (i.e. second-order) consequences of the immense trauma experienced by the Chinese people.

While the media focuses on questionable statistics and economic claims–factories are already back to 60% capacity, etc.– little attention has been paid to the tremendous losses. For me, a photo of a young woman weeping inconsolably as the body of her mother was unceremoniously hauled away to the crematorium crystallized the cost, the losses and the national trauma.

But for secrets and lies in service of political optics to have unleashed the virus on the entire nation–that is beyond the usual official rigging of statistics to serve Party optics. It is a complete betrayal of the Chinese people, and betrayal has long-lasting consequences.

Once trust, faith in institutions and confidence are lost, they cannot be recovered without much time and many small good faith steps; even one further betrayal will destroy whatever has been slowly regained.

Beneath the surface, confidence has been eroding for years. Despite the “permanently positive news” of bogus GDP statistics, China’s economy has been stagnating for the past few years, and the trade war was not the primary cause: unnoticed by a myopic Western financial media, China’s economy has shifted from a dependence on increasing production and direct foreign investment (FDI) to a largely hidden dependence on speculation.

Companies don’t have earnings from production, they have gains from speculating in debt and the stocks of other companies. Households aren’t getting wealthier because they’re producing more but because their real estate holding are rising in what’s been presented as a permanently expanding housing bubble.

This is one of the hidden costs of sacrificing reality to serve political optics: the average person has sensed the stagnation, but they’ve had little appreciation of the increasing fragility that left China’s pre-pandemic economy exquisitely vulnerable to an external shock.

The collapse of confidence has weakened the power of authorities’ threats. Trauma dulls the normal fear of punishment, as the pandemic’s punishments have stripped the traumatized of fear.

The limits of over-stretched authorities’ powers are also becoming visible. If 40% of a factory’s workforce doesn’t show up when ordered to do so, are there sufficient police to search for workers who returned to their home villages 1,000 kilometers away and put a bayonet in the back of each one? And then what? Will police officers be assigned to watch the workers 24/7 so they can’t escape? The practical limits on force are increasingly apparent.

Will a bayonet in the back of a flat-broke small business owner pay his overdue rent?

Trauma has consequences, and they don’t disappear in a matter of days or weeks. Rather, these consequences unleash consequences of their own, i.e. second-order effects, that are beyond the reach of propaganda or force.

When force fails, threats lose their potency and whatever shreds of legitimacy, trust or confidence that survived the trauma evaporate.

A bayonet in the back doesn’t restore the confidence of the traumatized, especially when the pandemic is still expanding globally.