The Hollowing Out Of America 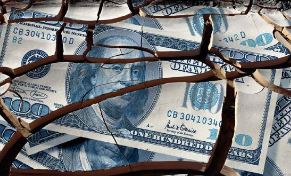 Here is hollowed-out America, an economy of ever-greater financial wealth piling up in the hands of the few while tens of millions of wage-earners can’t afford what was available to everyone, even the working class, in previous eras.

America is being hollowed out, but since we don’t measure what actually matters, the decline has been deep-sixed by the government and media. As I explain in my new book Will You Be Richer or Poorer?, there are a number of reasons why what’s important –social capital, for example–doesn’t get measured.

The most obvious reason is that it’s politically inconvenient for those in power for the hollowing out of America to be quantified. To conceal the decline, institutions only measure what can be massaged to appear positive. These statistics include inflation (Consumer Price Index, CPI),the unemployment rate, Gross Domestic Product (GDP), and hundreds of financial numbers: net wealth, bank loans and so on.

Everyone knows from experience that big-ticket expenses such as healthcare (see chart below), childcare, rent, college tuition, etc. have been rising at double-digit rates, while shrinkflation has reduced the quantity and quality of goods even as price has remained unchanged.

In other words, the official statistics are gamed to appear positive even as the nation is being hollowed out. People sense the disconnect but since what actually matters isn’t measured, there are few objective indicators of the decline we all experience in everyday life.

The second reason is that it’s difficult to measure intangible forms of capital such as social mobility and shared purpose. People are feeling increasingly insecure financially, but how do we measure this with any accuracy? We can track the number of people working second jobs in the gig economy, those with uncertain work schedules, etc., but even households with above-average incomes and conventional white-collar jobs are financially precarious in ways that don’t lend themselves to easy quantification.

And so while we’re constantly told the American consumer is in good shape, with manageable debt and rising incomes, in the real world auto loan defaults are soaring, 40% of those suffering from cancer are wiped out by the co-pays, and superficially middle-class households are one layoff away from default and insolvency.

As a result, we’re like the blind men touching different parts of the elephant and drawing completely erroneous conclusions about the size and nature of the animal. Much of what we measure is misleading (i.e. cheerleading), and what can’t be easily measured is dismissed as unimportant. Even worse, we conclude that since we can’t measure it easily, it doesn’t exist.

America is being hollowed out even as we’re constantly hectored that all is well. We’re told saving $10 on a pair of poorly made shoes is a tremendous benefit of globalization and neoliberal policies, but does a couple hundred dollars in savings on poorly made stuff (which is itself offset by an unmeasured decline in quality and durability) offset the fact that a huge swath of American households can no longer afford to rent their own apartment or house, much less buy a house?

The U.S. Only Pretends to Have Free Markets From plane tickets to cellphone bills, monopoly power costs American consumers billions of dollars a year.

These are the forces hollowing out America: the relentless rise of the cost of big-ticket essentials while wages stagnate for the bottom 80%; the normalization of profiteering monopolies and cartels who buy tax breaks and regulatory capture in our pay-to-play political system; the decline of social mobility; the erosion of shared purpose and social capital; the silencing of dissent and independent thought; the erosion of financial security as everyone is forced into risky casinos of speculative financialization; the erosion of the rule of law as the super-wealthy are more equal than everyone else; the criminalization of poverty; the decline of small business formation; the erosion of well-being and health; and so on in a long list of landslides in everything that matters that we don’t dare measure.

What’s Been Normalized? Nothing Good or Positive

Most perniciously, America is being hollowed out as local enterprises that reinvested profits back into their own communities have been wiped out by monopolies and cartels drawing upon unlimited credit lines of cheap money supplied by the Federal Reserve and other central banks, a system that guarantees the top few will collect whatever “wealth” is being generated by globalization and financialization: The 1% grabbed 82% of all wealth created in 2017 (and 2018 and 2019…).

Here is hollowed-out America, an economy of ever-greater financial wealth piling up in the hands of the few while tens of millions of wage-earners can’t afford what was available to everyone, even the working class, in previous eras: to buy a family home, however modest; to be able to afford to have children; to build meaningful capital; to have a positive social role in the community; to have a say in the political system; to have the opportunity to become self-employed without gambling the entire family’s capital on the venture; access to the ladder of social mobility and access to the shared capital of a functional government and infrastructure.

The whole point my book Will You Be Richer or Poorer? is to contrast the happy story reflected by what we do measure– an endless increase in financial wealth–with the disturbing account of what we’re losing or have already lost that we don’t dare measure lest it reveal how little is left of America’s non-financial wealth.

Article originally by Charles Hugh Smith via Of Two Minds