The Growing Risk of a 2020 Recession and Crisis 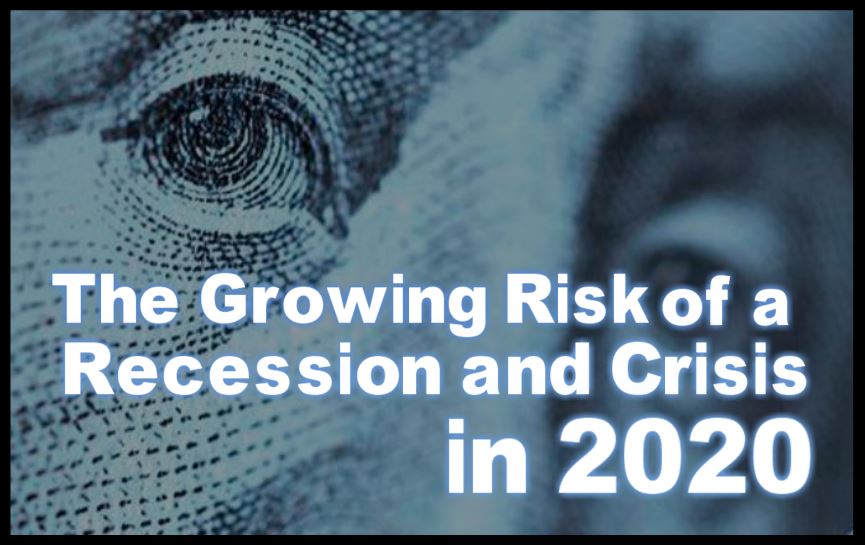 Across the advanced economies, monetary and fiscal policymakers lack the tools needed to respond to another major downturn and financial crisis. Worse, while the world no longer needs to worry about a hawkish US Federal Reserve strangling growth, it now has an even bigger problem on its hands.

NEW YORK – Last summer, my colleague Brunello Rosa and I identified ten potential downside risks that could trigger a US and global recession in 2020. Nine of them are still in play today.

Many involve the United States. Trade wars with China and other countries, along with restrictions on migration, foreign direct investment, and technology transfers, could have profound implications for global supply chains, raising the threat of stagflation (slowing growth alongside rising inflation). And the risk of a US growth slowdown has become more acute now that the stimulus from the 2017 tax legislation has run its course.

Meanwhile, US equity markets have remained frothy since our initial commentary. And there are added risks associated with the rise of newer forms of debt, including in many emerging markets, where much borrowing is denominated in foreign currencies. With central banks’ ability to serve as lenders of last resort increasingly constrained, illiquid financial markets are vulnerable to “flash crashes” and other disruptions. One such disruption could come from US President Donald Trump, who may be tempted to create a foreign-policy crisis (“wag the dog”) with a country like Iran. That might bolster his domestic poll numbers, but it could also trigger an oil shock.

Beyond the US, the fragility of growth in debt-ridden China and some other emerging markets remains a concern, as do economic, policy, financial, and political risks in Europe. Worse, across the advanced economies, the policy toolbox for responding to a crisis remains limited. The monetary and fiscal interventions and private-sector backstops used after the 2008 financial crisis simply cannot be deployed to the same effect today.

The tenth factor that we considered was the US Federal Reserve’s interest-rate policy. After hiking rates in response to the Trump administration’s pro-cyclical fiscal stimulus, the Fed reversed coursein January. Looking ahead, the Fed and other major central banks are more likely to cut rates to manage various shocks to the global economy.

While trade wars and potential oil spikes constitute a supply-side risk, they also threaten aggregate demand and thus consumption growth, because tariffs and higher fuel prices reduce disposable income. With so much uncertainty, companies will likely opt to reduce capital spending and investment.

Under these conditions, a severe enough shock could usher in a global recession, even if central banks respond rapidly. After all, in 2007-2009, the Fed and other central banks reacted aggressively to the shocks that triggered the global financial crisis, but they did not avert the “Great Recession.” Today, the Fed is starting with a benchmark policy rate of 2.25-2.5%, compared to 5.25% in September 2007. In Europe and Japan, central banks are already in negative-rate territory, and will face limits on how much further below the zero bound they can go. And with bloated balance sheets from successive rounds of quantitative easing (QE), central banks would face similar constraints if they were to return to large-scale asset purchases.

On the fiscal side, most advanced economies have even higher deficits and more public debt today than before the global financial crisis, leaving little room for stimulus spending. And, as Rosa and I argued last year, “financial-sector bailouts will be intolerable in countries with resurgent populist movements and near-insolvent governments.”

Among the risks that could trigger a recession in 2020, the Sino-American trade and technology war deserves special attention. The conflict could escalate further in several ways. The Trump administration could decide to extend tariffs to the $300 billion worth of Chinese exports not yet affected. Or prohibiting Huawei and other Chinese firms from using US components could trigger a full-scale process of de-globalization, as companies scramble to secure their supply chains. Were that to happen, China would have several options for retaliating against the US, such as by closing its market to US multinationals like Apple.

Under such a scenario, the shock to markets around the world would be sufficient to bring on a global crisis, regardless of what the major central banks do. With the current tensions already denting business, consumer, and investor confidence and slowing global growth, further escalation would tip the world into a recession. And, given the scale of private and public debt, another financial crisis would likely follow from that.

Both Trump and Chinese President Xi Jinping know that it is in their countries’ interest to avoid a global crisis, so they have an incentive to find a compromise in the next few months. Yet both sides are still ratcheting up nationalist rhetoric and pursuing tit-for-tat measures. Trump and Xi each seem to think that his country’s long-term economic and national security may depend on his not blinking in the face of a new cold war. And if they each genuinely believe the other will blink first, the risk of a ruinous clash is high indeed.

It is possible that Trump and Xi will meet for talks during the G20 summit on June 28-29 in Osaka. But even if they do agree to restart negotiations, a comprehensive deal to settle their many points of contention would be a long way off. As the two sides drift further apart, the space for compromise is shrinking, and the risk of a global recession and crisis in an already fragile global economy is rising.

Article originally written by
NOURIEL ROUBINI and it appeared on ProjectSyndicate.com (HERE)