The Greatest Depression Just Began. This is no Drill 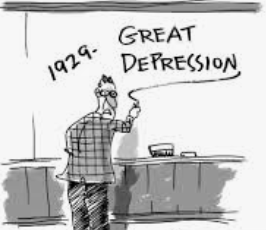 Exactly a month ago I warned that the Corona Virus outbreak was going to pop the “Everything Bubble.” I did something fairly subtle. I buried my main message under a whole heap of cow manure. It doesn’t make a rat’s ass if I was right or wrong about calling for a market crash in October or the Fed dumping piles of new crisp $100 bills onto a bonfire in September.

This time I’m going to put my message right at the top so no one can miss it. I quote from the January 27th piece, “This has the potential for being the biggest mass casualty event in world history. At the very least it will take down the financial system as the world economy grinds to a halt with efforts to contain the virus.”

In short, the world is fucked.

I didn’t want most people to understand that when I said it. If they had, there would be panic and you wouldn’t be able to buy food, fuel or water.

Face it, 97% of people want to believe all the crap handed out by their governments. Maybe 3% are willing to think for themselves. I’ve written a couple of books about investing and finance where I tried to show how to make money once you learn to think for yourself. There are no gurus or experts, only people who can think.

I aimed my piece a month ago at the 3%. Because if anyone was following the NEWS (?) from China, the virus is an utter disaster and that’s true in a developed nation. Once it spreads to Africa, as it surely will, it is going to be the biggest catastrophe the continent has ever faced with potentially the deaths of tens or hundreds of millions.

The numbers from China seem to indicate a death rate of above 2% for those under hospital treatment but far higher for the vastly greater number of people who caught it and eventually fell over dead. The Chinese government tossed them in bags and burned them. Eventually they will be putting them in landfills because they can’t fry them fast enough.

There was another important statement in my piece last month that may have flown over the heads of 97% of readers. “Governments lie about everything and as a result we are about to pay a terrible price. All of them lie.”

Any rational thinking person would have come to the conclusion that the Chinese government is lying through their teeth about how serious the virus is. That’s not a big deal because every other government is doing the same thing.

But eventually even the idiots wake up to the point that they can see the giant pimple right on the tip of their nose. Let me give you some facts to think about and how it will affect you.

I’m told that there are 30,000 unique parts in any typical automobile. Companies manufacturing cars might have 1,000 different suppliers providing those parts, many of which are located in China. If you can think for yourself, ask yourself just how many of those companies would have to fail to bring the auto manufacturer to a grinding halt.

The guys making gears for the starter, or steering wheels or door handles or seats. Any of them could stop the entire process. And the Chinese propensity of wanting to be supplier to the world of Chinese stuff, all the auto people just discovered they have a giant problem.

I’m also told that 90% of the precursor ingredients for drugs originate in China. So you may be buying your high blood pressure pills made in Spain but when they run out of the inputs to those pills, the output of those pills stop as well.

Airlines are starting to cancel flights because bookings are coming to a slow halt but also they are hiding the fact that flight crews are refusing to fly. The Cruise industry just got destroyed, the events on the Diamond Princess led to over 700 confirmed cases of the Corona Virus. Who in their right minds would continue to plan a cruise where you get a free case of the virus with every other ticket? But when this begins to hit military units or boarding schools or prisons, the shit literally will have hit the fan.

Let’s be real honest here for a moment. I am hardly the only guy who sees a financial disaster on the horizon. Lots of intelligent writers have generated reams of paper about something that has to happen. If you have an interest rate based system, there is always more debt than money to pay it. That’s why Jubilees go back thousands of years. Governments can pretend they intend to pay all the money they have borrowed back but it’s bullshit. Governments never pay their debts, they always default.

It has taken stock markets around the world a month to understand what my readers and I understood a month ago. The Corona Virus is the ultimate black swan and all governments are accomplishing is to prove how impotent they are to solve real problems.

The spread of the virus is expanding and that will continue. The damage to an already weak financial system will also continue. This is going to pop the Everything Bubble including gold, silver, mining stocks, the general stock market, Bitcon, real estate, collectibles and everything else that had absurd gains. Paper money just regained its real value, that is naught. People are going to go to bed rich and wake up poor.

You have a very limited time to prepare. I’ve warned for years to a mostly bored audience but this is the read deal. You can see what happened in Italyin a couple of short days, they locked down ten cities as unprepared citizens panicked and emptied food stores.

This is coming your way. Are you prepared or do you want to wait until the government tells you to panic?

The Greatest Depression is going to have negative effects on everyone. No one will escape entirely no matter how well prepared you are. All you can do is try to keep the damage to a minimum.

The only cures for an out of control financial system include a debt jubilee and some form of real money that will include precious metals. They are about to get real precious. But they might well do a 2008 on us before people wake up. If you are not yet prepared, get prepared.

If you are inclined to panic, always do it early.

by Bob Moriarty for 321Gold