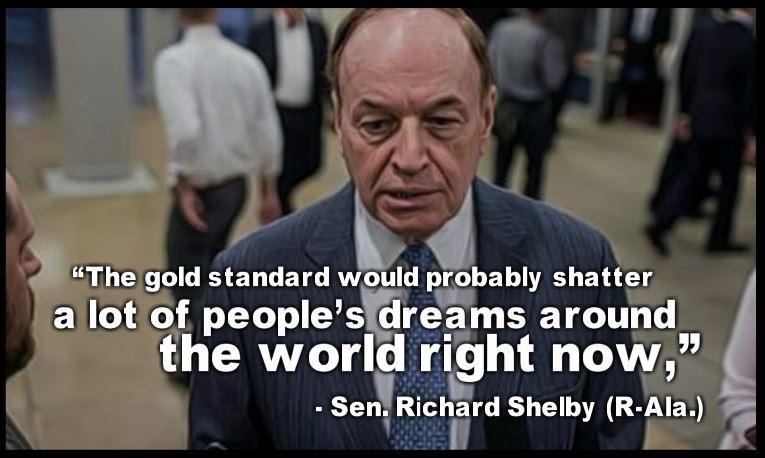 Prominent economists agree that a return to a gold-linked dollar would not be better for the average American.

Decades after the U.S. abandoned its policy of tying the dollar’s value to gold, President Donald Trump’s latest pick for the Federal Reserve, Judy Shelton, wants to bring it back into style.

Shelton’s longtime promotion of a return to a gold standard is so out of the mainstream that it’s likely to be an obstacle on her road to Senate confirmation. Yet it’s only one of several ideas she has espoused that would redefine — and diminish — the Fed’s role in the economy. And that matters because, while Shelton would be only one of seven Fed governors if confirmed, she could be in line to chair the central bank if Trump wins reelection.

A gold standard would make deficit spending much more expensive. It would limit the central bank’s ability to take the kind of extraordinary measures that it did during the financial crisis to stop the economy from going into freefall. And it would link the Fed’s interest rate decisions to gold market fluctuations rather than to its current goals of fighting inflation and maximizing employment.

“The gold standard would probably shatter a lot of people’s dreams around the world right now,” said Sen. Richard Shelby (R-Ala.), a key member of the Banking Committee, which will vet her nomination. “There was a reason to get off of it.”

“I’ve gotta see where she’s at on a lot of other stuff, but this is not necessarily something that I would give her high marks for,” added Sen. Jon Tester, a centrist Democrat who also sits on the Banking Committee and has voted with the GOP majority on some important legislation.

For her part, Shelton says she’s glad the topic is being discussed. “I am actually quite grateful that these ideas, that have been my focus for some 25 years, are being elevated to the level of public debate without people’s eyes glazing over,” she wrote in one of multiple emails to POLITICO.

While even Shelton agrees that the U.S. is nowhere near being on track to returning to a gold standard, which was fully abandoned by President Richard Nixon in 1971, the idea has maintained popularity in certain conservative and libertarian circles as a way to increase the dollar’s stability.

That’s particularly true among those with a strong distrust of the Fed — a camp that includes Shelton.

While both the 2012 and 2016 Republican Party platforms called for a new commission to consider fixing the dollar’s value to a precious metal, most economists argue that returning to gold would prevent the central bank from acting in the best interest of the economy. They also say it would attempt to aggressively head off a problem that hasn’t existed for decades: runaway inflation.

In 2012, the University of Chicago’s Booth School of Business asked 40 prominent economists whether a return to the gold standard would be better for the average American. All of them said no.

Support for tying the dollar to gold’s value makes a Fed candidate “manifestly unqualified, in the same way I wouldn’t have a surgeon general who supported leeches and bloodletting,” said Jason Furman, a Harvard professor and former chief economist to President Barack Obama. “It handcuffs the Fed and locks them into focusing on an objective that has no underlying reality, which is the price of the dollar relative to gold.”

Republicans have not publicly voiced concerns about Shelton herself, whose selection comes in the wake of senators’ objections to Trump’s last two picks, Stephen Moore and Herman Cain — both forced to withdraw. But neither are GOP senators embracing the idea that has been central to her policy advocacy for more than two decades.

“I haven’t had a chance to drill down and study what she has written and what she has said, and I’ve never met her,” he added, a sentiment echoed by Sen. Mike Rounds (R-S.D.).

Some senators are ignoring the question entirely. “I don’t think it’s relevant,” Sen. Tim Scott (R-S.C.) said when asked about her views on gold, adding that there was no need to focus on “controversial statements” when “she has decades of work that we can actually look at.”

But talking about Shelton’s decades of work means talking about gold, and her candidacy for the central bank gives her a bigger platform than ever to make her case.

The dollar is now valued by trading on the open market, rather than having a fixed value in terms of gold, and its price often appreciates in connection with positive developments in the U.S. economy. Trump has in recent months bemoaned the strength of the dollar relative to other currencies, because it makes U.S. exports more expensive, and called on the Fed to devalue it. Shelton, in contrast, has long advocated for a strong, stable dollar.

She says returning to an authentic gold standard — in which dollars are redeemable for a certain amount of gold — “would not be feasible” now, because there are too many dollars in circulation relative to the U.S. government’s store of gold. Such a standard hasn’t fully existed in the U.S. since the Great Depression.

But, she added, “it might be worth trying to incorporate some aspect of a gold/silver link to a future debt instrument to add intrinsic value.”

At the heart of her philosophy is the notion that people should be able to hold assets whose values are stable throughout time. And key to enforcing that goal is giving people the ability to hold gold rather than government-issued currencies.

“The dollar comes closest to being a global medium of exchange, though its efficiency is greatly reduced because its value constantly fluctuates,” Shelton wrotein 2012. “How can a global economy function optimally when the foremost monetary unit of account for measuring value shifts unpredictably across borders and through time?”

In 1994, she wrote a book, “Money Meltdown,” which advocated for a new Bretton Woods agreement. Under that World War II-era arrangement, countries tied their currencies to the value of gold so exchange rates wouldn’t fluctuate much. It was abandoned by the U.S. during the Vietnam War when foreign governments began cashing in their dollars for gold.

Shelton has suggested that one way to move toward an updated agreement would be a decision by Treasury to temporarily issue bonds that are redeemable in either dollars or gold, an idea floated by Alan Greenspan, who would later chair the Fed, in 1981.

She said such an example set by the U.S. would lead other countries to adopt a similar approach, essentially allowing countries to determine the relative value of their currencies.

In 2012, she explained what she saw as the implications of this idea: “Governments might even be removed from the business of producing money. A Universal Gold Reserve Bank could evolve toward the end of the transition process, bundling contracts into gold-linked securities.”

Still, Shelton told POLITICO that it’s “premature to talk about international agreements or linking to gold.”

“We are a long ways from doing anything along those lines,” she said. “I do think that, by identifying currency devaluation as being an unfair trade practice, President Trump is showing international economic leadership.”

Linking the dollar to gold would prevent central banks from being able to devalue their currency relative to the dollar to gain an export advantage against the U.S. — something Trump has been pressing the Fed to do.

George Selgin, an economist at Cato, is sympathetic to the goals of gold standard supporters but doesn’t agree with their solution. He also expressed skepticism about Shelton’s convertible bond proposal.

“If gold bonds had any bearing on monetary policy, it would be by causing the Treasury to pressure the Fed to limit movements in … the price of gold,” he said. But practically speaking, he added, Treasury would just give itself an escape hatch if gold prices went up too much.

“So the bonds would not give even the Treasury, let alone the Fed, a very strong incentive to lobby for keeping the price of gold low and stable,” Selgin added.