The Globally Systemic Banks Are Getting Ready To Blow 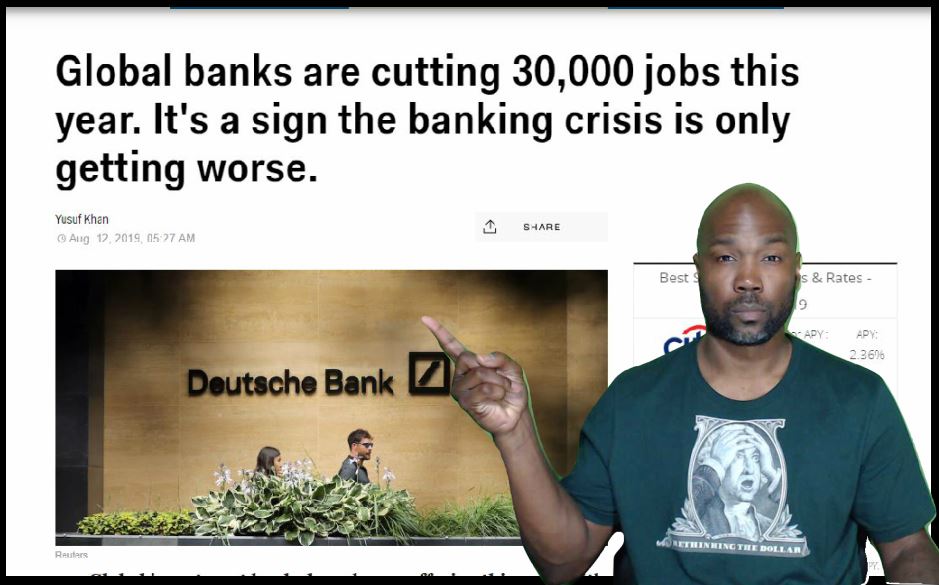 Nearly 30,000 investment-banking jobs are on the chopping board this year as the global banking industry looks set for a gloomy second half of 2019.

The Financial Times reported that most of the cuts have been in European banks, with Deutsche Bank making up a large portion of the layoffs after last month’s overhaul.

But American banks such as Citigroup are also struggling as falling interest rates, along with increased use of automation and AI, have hit investment banking jobs.

Deutsche Bank announced 18,000 job cuts as part of a major overhaul of its business earlier this year. The German bank also posted its biggest loss since 2008  in its latest earnings report, signaling the toll of the changes.

Meanwhile, Barclays has also had issues. It has cut 3000 jobs this year, an made some major changes at the top of the business.

A spokesperson said at the time most of these jobs were cut as part of an efficiency drive and that while some people were sacked, others had simply left their jobs and not been replaced.

In April, Société Générale announced that 1600 jobs would be cut, with most of the cuts in France and New York.

Meanwhile, Citigroup announced they would be cutting hundreds of jobs this year with a 10% reduction in their equities unit.

Citigroup’s challenges look to be the trend across global banking. Bloomberg reported that in the latest round of earnings earlier this month, the five biggest American banks’ trading revenue was down 8% last quarter, following a 14% slide in the first quarter.

Among the banks that have announced formal job cuts, the layoffs come to about 6% of their total workforce, according to the Financial Times.

“This won’t be the last trading-related job cuts story,” Jeff Harte, an analyst at Sandler O’Neill, told Bloomberg in reference to Citigroup. “The rest of Wall Street is thinking the same way.”