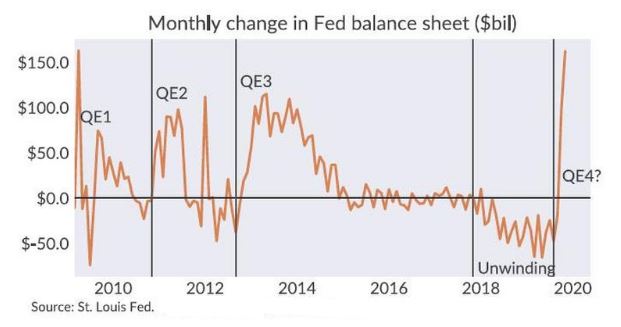 Has QE4 begun? The $1.2 trillion per month hole in the repo market.

In the two months since the repo market blow up, the Fed has been making repo open market operation purchases at a rate of $1.2 trillion per month.

The planned QE unwinding has hit a brick wall and the Fed balance sheet is now expanding at a rate matched only briefly by QE1, and faster than QE2 or QE3.

Is this a temporary rescue of the repo market or the start of a sustained QE4? To answer that question, we must look at how monetary policy has evolved since the Financial Crisis.

Going forward, the Fed must make a choice of staying in a regime of scarce reserves or going back to ample reserves. The Fed can lower interest on excess reserves and reduce bank incentives to hold excess reserves to some degree, but the new post‐2008 regulations will still necessitate a far larger base of reserves than pre‐2008. So managing a scarce reserves banking system on a large base of reserves will require continued massive open market operations. It will likely also require a change from the Treasury department’s cash flow management.

Alternatively, the Fed can recognize that they’ve found the floor for the total amount of reserves necessary in our new regulatory environment and add some reserves via another round of QE as cushion and grow the total reserves in line with our GDP. This would allow us to stay in the ample reserves regime.

The key metric I’d keep an eye on is the difference between interest on excess reserves and the effective Fed Funds rate, which I show below. We made the switch from an ample reserves regime to a scarce reserves regime in December of 2018.

Unless banking regulations change dramatically, my guess is that QE4 is coming. The Fed would rather have a cushion of ample reserves against unexpected repo market blow ups than react retroactively with $trillions/month of open market operation purchases.

by Howard Wang of Convoy Investments