The Fed Has Pumped $9 Trillion into Wall Street Over the Past Six Months, But Mnuchin Says “This Isn’t Like the Financial Crisis” 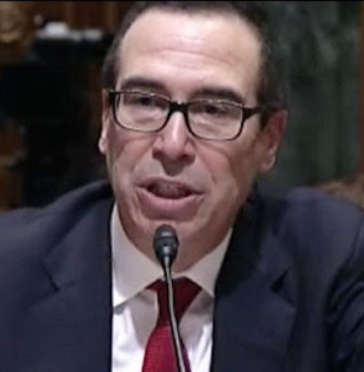 On February 12, 2020, the Dow Jones Industrial Average closed at 29,551.42. Yesterday, March 13, the Dow closed at 23,185.62 -– a loss of 6,365.80 points in one month’s time, or 21.54 percent. In 2008, the greatest financial calamity since the Great Depression, the Dow had lost 2,339.60 points or 21.4 percent one month after the frightening events of September 15, 2008 when Lehman Brothers filed bankruptcy, Merrill Lynch had to be taken over by Bank of America, and one day before the U.S. government seized the giant insurer, AIG, because it couldn’t pay the tens of billions of dollars in derivative bets it had made with the mega banks on Wall Street.

On this past Friday morning, in what appeared to be an effort to restore confidence on Wall Street, U.S. Treasury Secretary Steve Mnuchin gave an interview on CNBC. Mnuchin said “there’s lots of liquidity” and “this isn’t like the financial crisis.” But savvy folks on Wall Street, and readers of Wall Street On Parade, clearly understand that there is not lots of liquidity and this is exactly like the financial crisis of 2008 in terms of mega Wall Street banks losing massive amounts of their common equity capital and being on a liquidity feeding tube inserted by the Federal Reserve.

Since the Fed began its repo loan operations on September 17, the tally of the Fed’s cumulative loans to Wall Street’s trading firms comes to more than $9 trillion (using the Fed’s own Excel spreadsheet of the data; you have to manually remove the Reverse Repo dollar amounts.)

According to the Fed audit conducted by the Government Accountability Office (GAO), from December 12, 2007 to July 21, 2010, a period spanning more than 31 months during the worst financial crisis since the Great Depression, the Fed’s cumulative loans to Wall Street tallied up to $16.1 trillion. (See chart below from the GAO audit.)

And here we are today, when everyone from Fed Chairman Jerome Powell to bank analyst Mike Mayo is telling the public that the banks have plenty of capital and yet the Fed has pumped out 56 percent in six months of the amount it funneled to the Wall Street banks over 31 months during the 2008 financial crisis. At this rate, it is going to top the money it threw at the 2008 crisis in no time at all.

That’s no exaggeration. Just this past Thursday the Fed said it would make $1.5 trillion available to Wall Street over just the next two days. The banks didn’t take all of that money but the Fed clearly thought there was a big enough crisis to offer it.

The Fed’s balance sheet is back to $4.3 trillion, just $200 billion short of the $4.5 trillion peak it set following the financial crisis.

While the Fed was providing that $16.1 trillion to Wall Street during the financial crisis at super cheap interest rates, traders and executives of the mega banks were being rewarded with multi-million bonuses. Contrast that to the announcement that JPMorgan Chase’s Board recently rewarded Jamie Dimon, its Chairman and CEO, with a $30 million pay package. That largess comes despite the fact that the bank is under its fourth criminal probe by the Department of Justice, all while Dimon has sat at the helm.

Two of the prior criminal investigations resulted in the bank pleading guilty to three separate felony counts. One of the criminal probes, into turning its precious metals desk into a criminal racketeering enterprise, is ongoing.

Since the Fed turned on its latest money spigot to Wall Street, it has refused to provide the public with the dollar amounts going to any specific banks. This has denied the public the ability to know which financial institutions are in trouble. The Fed, exactly as it did in 2008, has drawn a dark curtain around troubled banks and the public’s right to know, while aiding and abetting a financial coverup of just how bad things are on Wall Street.

Why would the banks borrow at the Discount Window, where the details will eventually be made public, when the Fed is willing to offer them trillions in secret repo loans. It has been the conventional wisdom for the past 100 years that there is stigma attached to a major bank borrowing from the Discount Window, since it suggests that they have run out of their own liquidity – meaning they didn’t properly prepare for a rainy day and their federal regulators were also napping.