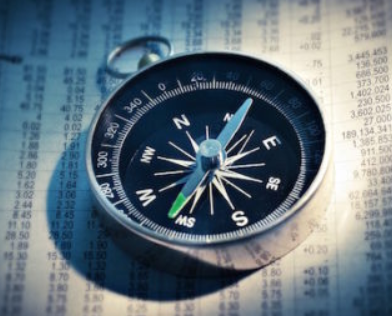 The stock market is becoming increasingly disconnected from underlying main street reality. Corporate profits have been declining since the third quarter of 2018.

However, pre-tax corporate profits have been declining since the Q3 2014 (this data is available on the St. Louis Fed FRED website). Real corporate profits (adjusted for CPI and including inventory write-downs and capex) are the lowest since the financial crisis. Remarkably, rather than the usual “hockey stick” forecasts, Wall St analysts have revised lower their consensus earnings estimates for the Dow Jones Industrials. In fact, per the chart above, I think you can say that Wall Street’s forward EPS estimates have gone off a cliff.

The “narrative” architects and fairytale spinners are desperately looking for evidence to fit their “consumer is still healthy/economy still fine” propaganda. But a look under “the hood,” starting with the employment report, reveals a reality that is in stark contrast to the manipulated headline numbers.

There’s no b.s. like the BLS (Bureau of Labor Statistics). The BLS publishes the monthly non-farm payroll report.  Predictably, the headline number reporting that 225k “jobs” created was well above the consensus forecast of 160k. But the benchmark revision removed 514,000 jobs reported to have been created between April 2018 and March 2019. This is visually what it looks like when 20% of the prior year’s job “growth” is erased:

The black line shows the number of jobs originally reported between April 2018 and March 2019. The light blue line shows the revised data. The two lines are lined up prior to April 2018 reflecting prior benchmark revisions, which is why they’re in sync. A large portion of the revision came from the BLS’ seasonal “adjustments” model over-estimating job creation related to consumer spending, primarily the retail sector and leisure/hospitality.

Second, without the increase in Government spending, the decline in construction spending would have been worse. Third, per the CAT CEO’s outlook for lower residential spending in 2020 (and I’m certain his view is derived from residential construction equipment orders) it would seem that homebuilders are not backing their optimism per the homebuilder sentiment report with real money if they are planning to spend less in 2020 than they did in 2019.

Notwithstanding the BLS fantasy employment report this past Friday, here’s a good leading indicator of labor market weakness:

When businesses start reducing payroll to cut expenses in response to expected business weakness, the temp labor goes first. You’ll note that this data series went negative briefly in 2015,  but recovered somewhat. In all probability businesses responded to the Trump election hopium and the stimulative effect from Trump’s massive corporate tax cut. But businesses prematurely implemented expansion and capex spending and now they’re back to using cash for stock buybacks into which insiders are selling.

While December retail sales, released in mid-January, showed a 0.3% increase over November, ex-autos retail holiday spending was slightly better than expected. December retail sales not including autos increased 0.7%. However, if you exclude gasoline and auto sales, retail spending increased 0.5%. Auto sales took a hit in December (predictably) and gasoline price inflation boosted the headline number. Surprisingly, considering all of the hoopla in the mainstream financial media about “strong” online sales for the holidays, online sales only increased 0.2%.

Underlying the “good” holiday retail sales number, is a troubling reality. The Fed reported this past Friday (Feb 7th) that consumer credit soared by $22.1 billion in December ($15 billion was the consensus forecast). Most of that increase is attributable to credit card spending, which accounted for $12.6 billion of the $22 billion. This was the biggest one-month jump in credit card debt since 1998. Total consumer credit outstanding hit a record $4.2 trillion in December.

What makes this statistic even more troubling is the fact that credit card delinquency and default rates are starting to accelerate per the Discover Financial (DFS) data I presented in January 26th SSJ issue. PNC Bank (PNC) also reported rising credit delinquencies and charge-offs when it reported its Q4. Its stock tanked 7% over the next eight trading days. Credit Acceptance Corporation (CACC – subprime auto loans) reported rising delinquencies, defaults and charge-offs on January 30th. It’s stock fell 8.1% the next day though it’s recouped about half of that loss through Friday (Feb 7th).

The chart above shows CPI-adjusted retail sales (blue line) vs consumer credit outstanding (red line) for the last 5 years. CPI-adjusted retail sales declined slightly in 2019, which means “unit volume” declined slightly, while consumer credit continued to rise. Now imagine if a real inflation adjustment was applied to retail sales instead of the phony CPI. Real retail sales would show a decline in 2019. The chart above is not a “friend” of perma-bulls and economic fantasy promoters, which is probably why you will never see a chart like that in the mainstream financial media.

While it’s clear e-commerce is slowly taking market share from brick/mortar, the latter’s troubles are derived primarily from the deteriorating financial condition of the average household. A study released this past week from a survey taken in late November showed that nearly 70% of all respondents said they had less than $1,000 in savings.

The economy is contracting in most sectors. Any area of the economy that still has pulse is being driven by debt issuance.  Any media reports or official proclamations that the economy is “doing  well” are nothing more than fake news and propaganda.