The Entitlement Crisis Nobody’s Talking About 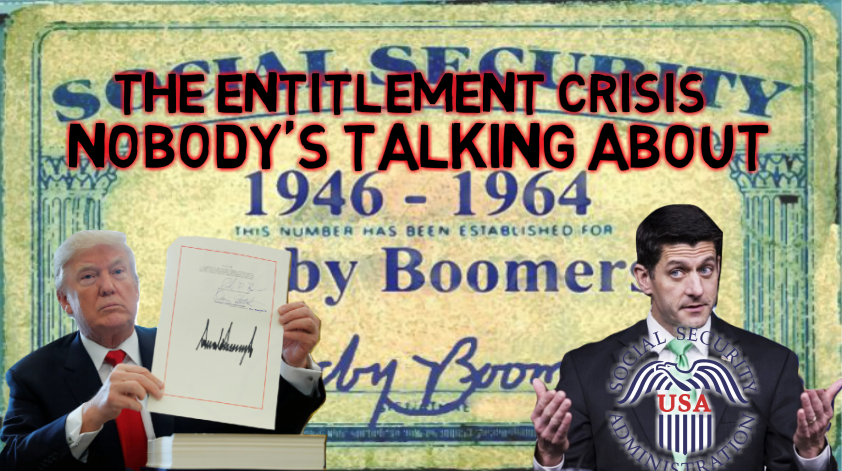 The biggest problem facing America is the overwhelming entitlement crisis. The National Entitlement Commission, headed by Sens. Bob Kerry and John Danforth, reached the following, startling conclusion. If no changes are made, then just 15 years from now, only five federal programs will consume all federal revenues.The five are Social Security, Medicare, Medicaid, interest on the national debt and federal employee retirement. No money would be left for any other federal activity, whether national defense, welfare, federal law enforcement, aid to education, or any other

And it just gets worse. Boston University Professor Laurence Kotlikoff, who pioneered the concept of generational accounting to project federal tax burdens, calculates that with no change in current law, a child born today would have to pay 84 percent of his or her lifetime income in taxes to finance an entitlement programs and other government spending. Yet the $82 trillion avalanche of Social Security and Medicare deficits that will come over the next three decades doesn’t seem to be getting anyone’s attention in DC.

For years, Republican leaders from Newt Gingrich to Paul Ryan to Mitt Romney called for modernizing Social Security and Medicare before they collapse under the weight of 74 million retiring Baby Boomers.

Then Donald Trump won 88 percent of Republican voters — and the presidency — while pledging that “there will be no cuts to Social Security, Medicare & Medicaid.”Six months later, a Pew poll revealed that only 15 percent of Republicans support trimming Medicare, and only 10 percent support Social Security reform.Today, Republican-controlled Washington wants nothing to do with Social Security and Medicare reform or serious deficit reduction. Even the $1.5 trillion tax cut has poisoned the well for spending reform. It would be politically suicidal to cut taxes for corporations and then turn around and slash Medicare for seniors.This complacency could be catastrophic. Social Security and Medicare reform has fallen off the radar precisely when it is the most urgent.

Between 2008 and 2030, 74 million Americans born between 1946 and 1964 — or 10,000 per day — will retire into Social Security and Medicare. And despite trust-fund accounting games, all spending will be financed by current taxpayers.That was all right in 1960s, when five workers supported each retiree. The ratio has since fallen below three-to-one today, on its way to two-to-one by the 2030s. Over the next 30 years, according to data from the Congressional Budget Office, Medicare will run a $40 trillion cash deficit, Social Security will run a $19 trillion cash deficit, and the interest on the resulting program debt will be $23 trillion.

Even viewers inclined to be skeptical of 30-year projections should take this one seriously. Future inflation rates are indeed anyone’s guess, but the existence of 74 million Baby Boomers retiring into Social Security and Medicare is an actuarial reality.Ultimately, the math always wins. The deficit will continue expanding, key programs will continue to be squeezed, and taxes will rise until politicians and voters finally confront the elephant in the room.

The elephant in the room is that entitlement spending may end up being the final straw that broke the camels back. In this case, to many promises, to much debt and not enough money to pay out may be the reason America goes under.

DISCLAIMER: The financial and political opinions expressed in this interview are those of the guest and not necessarily of “Rethinking the Dollar”. Opinions expressed in this video should not be relied on for making investment decisions and do not constitute personalized investment advice. The information shared is for the sole purpose of education.