The Economic Path Forward May Lead Over A Cliff 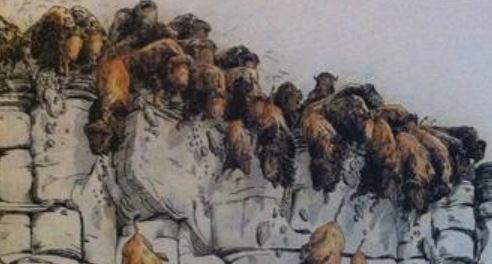 It is important to acknowledge the path forward does not always take us where we would like to go. We as a country and society do not always have as much control over our fate as we tend to believe. Starting life as an idealist that had high hopes for mankind and society, I have become jaded over the years by man’s shortcomings.

The combination of laziness, shortsightedness and several other negative traits have weakened my belief our government and society will do the right thing when push comes to shove. The less you leave in the hands of those who couldn’t care less about your fate the better off you will be.

Unfortunately, our economy and financial system have been crafted in a way that places our fate in the hands of those who often don’t care about us as individuals. Those in control often do not have “skin in the game” and are not positioned to be held accountable if the system fails. An image of an effective hunting technique can be seen in the picture of Buffalo Jump Wyoming on the right. In the past hunters were known to stampede their prey over the edge of a steep cliff.

This image is in some ways an analogy to the fate I envision awaiting those who have willingly placed their wealth in the hands of others.Far too much faith has been placed in governments doing the right thing. The term “public servant” stands as a monument to our gullibility as a society. In reality few of those employed by the government carry out their duties because of dedication and devotion. Generally, power and compensation coupled with security and little downside or risk are why people choose to take a job in government.

In our modern culture, we as individuals are often far removed from the wealth we have accumulated. At one-time people were surrounded by tangible items representing where their wealth was stored but today that is less common. Now, much of our savings flow into paper or digital promises such as stocks or pensions plans. The further away from us our wealth is removed and stored the less control we have over it. Some people have almost 25% of their pay withheld and placed in a retirement vehicle with only a pledge it will be returned with interest several decades from now. These people are very vulnerable to the possibility their money will vanish into the dark.

Liquidity floats all boats until it doesn’t but that is the part of this economic farce we have yet to see play out. When this happens the inflow of liquidity from policies that have concentrated far too much wealth into equity markets will reverse. This will trigger a negative ripple effect that strikes all segments of the economy and financial sectors. The natural laws of economics dictate that at some point going through the pain of an economic crisis becomes preferable to expanding a bubble that carries with it devastating side-effects. This doesn’t mean we will be given a choice, most likely the general direction we take will be dictated by events outside our control. The possibilities of nuclear war or the current global pandemic are just two examples.

We are moving down the current path at a time when inequality has exploded. Still, many people are buying into the line that things have never been better. The question is, better for who? After adjusting for real-world inflation many households have seen their net income and wealth decline over the last decade. Despite the endless media propaganda about growth and recovery, it is self-evident to anyone who bothers to look closely that the rich and powerful are increasingly grabbing a larger slice of the economic pie. This is an issue society must address in one form or another.

A recent post questioned the sanity of a market that values Tesla as the second most valuable carmaker on the planet. Tesla’s recent rally has pushed its market value to over $85 billion making it the most valuable US automaker in history with its market cap more than Ford and GM combined. It should be noted that Tesla has never even produced 400 thousand cars in one year and less than a million during its history. Still, within days Tesla’s valuation again jumped, this time to over $100 billion taking it above the world’s second most valuable carmaker, VW, which sold over 10 million vehicles last year.” Now it trails only behind Toyota.

All the money and credit being unleashed by central banks is the equivalent of printing tokens and placing them in digital accounts that can vanish in the blink of an eye. It does not necessarily create real wealth. Oddly enough, this is something the world has come to accept overtime. Belief in a broken or poorly designed system does not mean it will fulfill its desired task. How long we can ignore these flaws before they come back to haunt us is questionable but the seed of financial destruction has begun to grow. This can be seen in our growing debt both public and private as well as in pension plans which are massively underfunded.

This article is not intended to provide glorious answers but to remind and warn you that articles on many media outlets such as the ones titled; A quarter of millennials say they’ve saved $100,000 — here’s how they did it! or This Earnings Season Is Better Than You Think are misleading at best. Like many of you, I’m troubled by a future that is hurling at us with ever greater speed and for which, in reality, all of us have very limited control. Years ago I started this blog as a way to express my views and exchange ideas on a variety of subjects.  With that in mind, it is a good time to point out that nobody can time or predict when the economy will fall out of bed but we are in uncharted waters and caution is warranted.