The Costs & Consequences Of $15/Hour 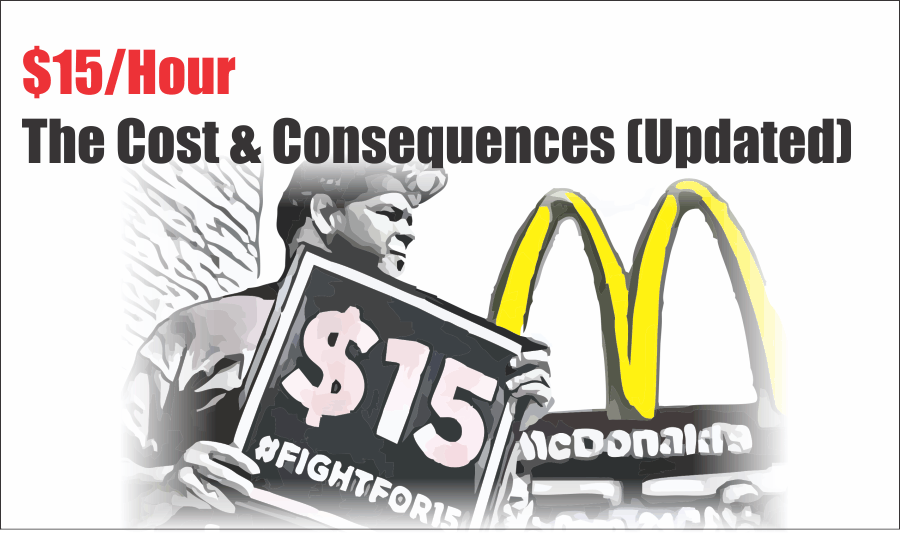 In 2016, I first touched on the impacts of hiking the minimum wage.

According to the April 2015, BLS report the numbers were quite underwhelming:

‘In 2014, 77.2 million workers age 16 and older in the United States were paid at hourly rates,representing 58.7 percent of all wage and salary workers. Among those paid by the hour, 1.3 million earned exactly the prevailing federal minimum wage of $7.25 per hour. About 1.7 million had wages below the federal minimum.

Hmm…3 million workers at minimum wage with roughly half aged 16-24. Where would that group of individuals most likely be found?

Not surprisingly, they primarily are found in the fast-food industry.

“So what? People working at restaurants need to make more money.”

Okay, let’s hike the minimum wage to $15/hr. That doesn’t sound like that big of a deal, right?

My daughter turned 16 in April and got her first summer job. She has no experience, no idea what “working” actually means, and is about to be the brunt of the cruel joke of “taxation” when she sees her first paycheck.

Let that soak in for a minute.

Now, what do you think is going to happen to the price of hamburgers when companies must pay $30,000 per year for “hamburger flippers?”

Not A Magic Bullet

After Seattle began increased their minimum wage, the NBER published a study with this conclusion:

“Using a variety of methods to analyze employment in all sectors paying below a specified real hourly rate, we conclude that the second wage increase to $13 reduced hours worked in low-wage jobs by around 9 percent, while hourly wages in such jobs increased by around 3 percent.Consequently, total payroll fell for such jobs, implying that the minimum wage ordinance lowered low-wage employees’ earnings by an average of $125 per month in 2016.”

This should not be surprising as labor costs are the highest expense to any business. It’s not just the actual wages, but  also payroll taxes, benefits, paid vacation, healthcare, etc. Employees are not cheap, and that cost must be covered by the goods or service sold. Therefore, if the consumer refuses to pay more, the costs have to be offset elsewhere.

For example, after Walmart and Target announced higher minimum wages, layoffs occurred (sorry, your “door greeter” retirement plan is “kaput”) and cashiers were replaced with self-checkout counters. Restaurants added surcharges to help cover the costs of higher wages, a “tax” on consumers, and chains like McDonald’s, and Panera Bread, replaced cashiers with apps and ordering kiosks.

A separate NBER study revealed some other issues:

“The workers who worked less in the months before the minimum-wage increase saw almost no improvement in overall pay — $4 a month on average over the same period, although the result was not statistically significant. While their hourly wage increased, their hours fell substantially.

Again, this should not be surprising. If a business can “try out” a new employee at a lower cost elsewhere, such is what they will do. If the employee becomes an “asset” to the business, they will be moved to higher-cost areas. If not, they are replaced.

Here is the point that is often overlooked.

Your Minimum Wage Is Zero

Individuals are worth what they “bring to the table” in terms of skills, work ethic, and value. Minimum wage jobs are starter positions to allow businesses to train, evaluate, and grow valuable employees.

Individuals who are capable, but do not aspire, to move beyond “entry-level” jobs have a different set of personal issues that providing higher levels of wages will not cure.

Lastly, despite these knock-off effects of businesses adjusting for higher costs, the real issue is that the economy will quickly absorb, and remove, the benefit of higher minimum wages. In other words, as the cost of production rises, the cost of living will rise commensurately, which will negate the intended benefit.

The reality is that while increasing the minimum wage may allow workers to bring home higher pay in the short term; ultimately they will be sent to the unemployment lines as companies either consolidate or eliminate positions, or replace them with machines.

There is also other inevitable unintended consequences of boosting the minimum wage.

The Trickle Up Effect:

According to Payscale, the median hourly wage for a fast-food manager is $11.00 an hour.

Of course, none of this is a problem as long as you can pass on higher payroll, benefit and rising healthcare costs to the consumer. But with an economy stumbling along at 2%, this may be a problem.

A report from the Manhattan Institute concluded:

“By eliminating jobs and/or reducing employment growth, economists have long understood that adoption of a higher minimum wage can harm the very poor who are intended to be helped.Nonetheless, a political drumbeat of proposals—including from the White House—now calls for an increase in the $7.25 minimum wage to levels as high as $15 per hour.

But this groundbreaking paper by Douglas Holtz-Eakin, president of the American Action Forum and former director of the Congressional Budget Office, and Ben Gitis, director of labormarket policy at the American Action Forum, comes to a strikingly different conclusion: not only would overall employment growth be lower as a result of a higher minimum wage, but much of the increase in income that would result for those fortunate enough to have jobs would go to relatively higher-income households—not to those households in poverty in whose name the campaign for a higher minimum wage is being waged.”

This is really just common sense logic but it is also what the CBO recently discovered as well.

Hiking the minimum wage doesn’t affect my business at all as no one we employee makes minimum wage. This is true for MOST businesses.

The important point here is that the unintended consequences of a minimum wage hike in a weak economic environment are not inconsequential.

Furthermore, given that businesses are already fighting for profitability, hiking the minimum wage, given the subsequent “trickle up” effect, will lead to further increases in automation and the “off-shoring” of jobs to reduce rising employment costs.

In other words, so much for bringing back those manufacturing jobs.