The Biggest Gold Nugget Ever Found 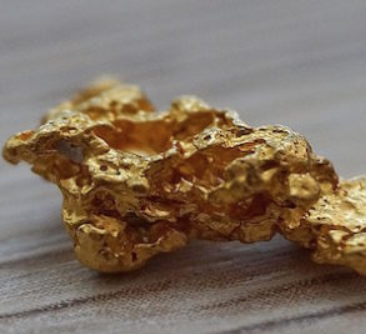 Last year, an Australian family found a gold nugget just laying on the ground. Needless to say, this doesn’t happen every day. In fact, finding a gold nugget is quite unusual – even a small one. But every once in a while, somebody discovers a massive nugget. The biggest nugget ever discovered was over 600 pounds!

Virgin gold is a natural product of the geological process. A gold nugget is a mineral which chemical composition is a solid solution of silver with gold. Percent of silver in such a solution can be up to 43%. Also, the solution may include up to 0.9% of some other impurities (mainly copper or iron). Depending on the composition, gold nuggets may have different colors and prices.

These are native minerals of the precious metal that comprise the largest part of the gold in nature. Gold nuggets are usually concentrated in hydrothermal deposits where gold ores are formed.

In nature, as a rule, gold is not concentrated at some point; it nonuniformly distributes in crystalline silica and sulfides.

Even nowadays, for efficient gold prospecting, you’ll need a specialized metal detector aimed at detecting small-sized targets. But even in this case, your treasure hunting trip may not be successful.

That’s why people have always tended to look for large gold nuggets, even though they are quite seldom encountered.

Gold nuggets that are heavier than the latter are considered giant ones, and when they are found it becomes a sensation. As a rule, large-sized gold nuggets are located quite deep, though there were some seldom cases when these were found after digging a small hole.

There are about 10,000 cases in history when large gold nuggets that weighed more than 10 kilos were found. Unfortunately, their stories are almost the same: they became a sensation; they received names that were popular for a while, and then …these gold nuggets were smelted.

The largest officially acknowledged gold nugget in the world, the existence of which was documented is an Australian giant gold nugget that was found at the end of the 19th century.

At that time, the Gold Rush that used to take over the whole continent has been nearly over, and there were very few desperate gold diggers left who continued believing in their fortune.

One of these bullet-heads was a German-born colonist whose name was Bernhardt Holtermann. He left his motherland and relocated to Australia, hoping to find a better life there.

He decided to try his hand at gold prospecting, and for several years he unsuccessfully continued gold mining.

The situation stayed the same till 1871 when he started working in a mine called Hill End.

Here the gold digger smelled gold because he started finding a large number of gold nuggets from the very beginning. On October 19, 1872, Holtermann and his partner stumbled across the finding that has changed their lives forever.

Later, this gold nugget was named Holtermann Nugget. The giant gold specimen weighed 290 kilos (630 pounds), and its length was about 150 centimeters (59 inches).

Many modern scientists tend to think that Holtermann dug out not a gold nugget but a huge piece of the gold vein in which the precious metal was mixed with crystalline silica impregnations. But even the obtained decreased mass of the pure gold still beat the records.

The end of the 19th century was the time when photography was very popular, and luckily Bernhardt Holtermann was not just a fan of gold prospecting, but also he enjoyed taking photos.

That’s why an old photo has survived to this day, and there you can see the giant gold specimen and its discoverer.

The gold diggers didn’t succeed in selling the gold nugget in one piece, so they smelted it down.

BY PETER HARRINGTON for Schiff Gold