The $6 Trillion Pension Bailout Is Coming 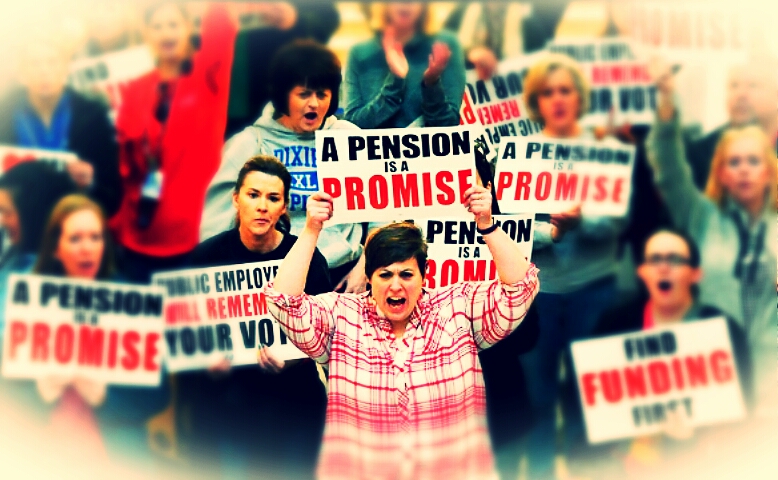 This past week, Trump announced he had reached an agreement with Congress to pass a continuing resolution which will suspend the debt ceiling until July 2021.

The good news is that it will ONLY increase spending by just $320 billion.

What a bargain, right?

That is just the “starting point” of proposed spending. Without a “debt ceiling” to constrain spending, the actual spending will be substantially higher.

However, the $320 billion is also deceiving because that is on top of the spending we have already committed. As I noted just recently:

“In 2018, the Federal Government spent $4.48 Trillion, which was equivalent to 22% of the nation’s entire nominal GDP. Of that total spending, ONLY $3.5 Trillion was financed by Federal revenues, and $986 billion was financed through debt.

In other words, if 75% of all expenditures is social welfare and interest on the debt, those payments required $3.36 Trillion of the $3.5 Trillion (or 96%) of revenue coming in.”

Do some math here.

The U.S. spent $986 billion more than it received in revenue in 2018, which is the overall “deficit.” If you just add the $320 billion to that number you are now running a $1.3 Trillion deficit.

Sure enough, this is precisely where I forecast we would be in December of 2017.

“Of course, the real question is how are you going to ‘pay for it?’ On the ‘fiscal’ side of the tax reform bill, without achieving accelerated rates of economic growth – ‘the debt will balloon.’

The reality, of course, is that is what will happen because there is absolutely NO historical evidence that cutting taxes, without offsetting cuts to spending, leads to stronger economic growth.”

More importantly, Federal Tax Revenue is DECLINING. Such was NOT supposed to be the case, as the whole “corporate tax cut” bill was supposed to lift tax revenues due to rising incomes.

“Increases in the national debt have long been squandered on increases in social welfare programs, and ultimately higher debt service, which has an effective negative return on investment. Therefore, the larger the balance of debt becomes, the more economically destructive it is by diverting an ever growing amount of dollars away from productive investments to service payments.

The relevance of debt versus economic growth is all too evident, as shown below. Since 1980, the overall increase in debt has surged to levels that currently usurp the entirety of economic growth. With economic growth rates now at the lowest levels on record, the growth in debt continues to divert more tax dollars away from productive investments into the service of debt and social welfare.”

“The irony is that debt driven economic growth, consistently requires more debt to fund a diminishing rate of return of future growth. It now requires $3.02 of debt to create $1 of real economic growth.”

Over the next 12-18 months, spending will expand, and the deficit will quickly approach $2 Trillion.

But, here’s the worse part: The projected budget deficits over the next couple of years are coming at the end of a decade-long growth cycle with the economy essentially at full employment. This is significant because, while budget deficits can be helpful in recessions by providing an economic stimulus, there are good reasons we should be retrenching during good economic times, including the one we are in now.

“As President Kennedy once said, ‘the time to repair the roof is when the sun is shining.’  Instead, we are punching more holes in the fiscal roof. The fact that debt and deficits are rising under conditions of full employment suggests a deeper underlying fiscal problem.”

During the next recession, revenue will drop sharply, deficits will explode, and the Government will be forced into another round of bailouts.

Congress is already committing you to pay for it.

I previously penned an article discussing the “Unavoidable Pension Crisis.”

“An April 2016 Moody’s analysis pegged the total 75-year unfunded liability for all state and local pension plans at $3.5 trillion. That’s the amount not covered by current fund assets, or future expected contributions, or investment returns at assumed rates ranging from 3.7% to 4.1%. Another calculation from the American Enterprise Institute comes up with $5.2 trillion, presuming that long-term bond yields average 2.6%.

Since then, we have gotten some updated estimates. Surely, after 3-years of surging stock market returns things have gotten markedly better, right?

“Moody’s Investor Service estimated last year that the total pension funding gap in the US is $4.4 trillion. A few months ago the American Legislative Exchange Council estimated it at nearly $6 trillion.”

Don’t worry, Congress has your back.

In “The Next Financial Crisis Will Be The Last” I stated:

“The real crisis comes when there is a ‘run on pensions.’ With a large number of pensioners already eligible for their pension, the next decline in the markets will likely spur the ‘fear’ that benefits will be lost entirely. The combined run on the system, which is grossly underfunded, at a time when asset prices are declining will cause a debacle of mass proportions. It will require a massive government bailout to resolve it.”

Fortunately, Congress has made some movement to get ahead of the problem with the Rehabilitation for Multiemployer Pensions Act. The legislation, if passed, is an attempt to address the multi-trillion dollar problem of unfunded pension plans in America.

By the way, this isn’t JUST an American problem, it is a $70-Trillion global problem, as noted recently by Visual Capitalist.

“According to an analysis by the World Economic Forum (WEF), there was a combined retirement savings gap in excess of $70 trillion in 2015, spread between eight major economies…

The WEF says the deficit is growing by $28 billion every 24 hours – and if nothing is done to slow the growth rate, the deficit will reach $400 trillion by 2050, or about five times the size of the global economy today.”

This is why Central Banks globally are terrified of a global downturn. The pension crisis IS the “weapon of mass destruction” to the global financial system, and it has started ticking.

While pension plans in the United States are guaranteed by a quasi-government agency called the Pension Benefit Guarantee Corporation (PBGC), the reality is the PBGC is already nearly bust from taking over plans following the financial crisis. The PBGC is slated to run out of money in 2025. Moreover, its balance sheet is trivial compared to the multi-trillion dollar pension problem.

The proposal from Congress is simply to use more debt. According to the new legislation, whenever a pension plan runs out of funds, Congress wants the pension plan to borrow money in order to keep making payments to beneficiaries.

Think about that for a moment.

Who would loan money to an insolvent pension fund?

Oh, that would be you, the taxpayer.

In other words, the Government wants you to bail out your own retirement fund.

But it’s going to get far worse.

We Are Out Of Time

Currently, 75.4 million Baby Boomers in America—about 26% of the U.S. population—have reached or will reach retirement age between 2011 and 2030. And many of them are public-sector employees. In a 2015 study of public-sector organizations, nearly half of the responding organizations stated that they could lose 20% or more of their employees to retirement within the next five years. Local governments are particularly vulnerable: a full 37% of local-government employees were at least 50 years of age in 2015.

The vast majority of these individuals, when they retire, will depend on their pension (if they are in the 15% of the population that has one, and Social Security for a bulk of their living expenses in retirement.

The problem is that pension funds aren’t going to be able to keep their promises. Social Security, according to its own annual report, will run out of money in 15 years. Medicare has a massive underfunded problem as well.

But yet, the current Administration believes our outcome will be different.

More debt, and lack of any budgetary controls, will somehow lead to surging levels of economic growth despite no historical evidence of that being the case.

The reality is that the U.S. is now caught in the same liquidity trap as Japan. With the current economic recovery already pushing the long end of the economic cycle, the risk is rising that the next economic downturn is closer than not. The danger is that the Federal Reserve is now potentially trapped with an inability to use monetary policy tools to offset the next economic decline when it occurs. Combine this with:

The combined issues of debt, deflation, and demographics will continue to push the U.S. closer to the “point of no return.”

As the aging population grows becoming a net drag on “savings,” the dependency on the “social welfare net” will continue to expand. The “pension problem” is only the tip of the iceberg.

It will devastate many Americans.

It is just a function of time.

“Demography, however, is destiny for entitlements, so arithmetic will do the meddling.” – George Will

But here is the real question that needs to be answered:

“Who is going to buy all the debt?”

Watch from over 30+ hours of RTD Interviews here…
Best Sellers